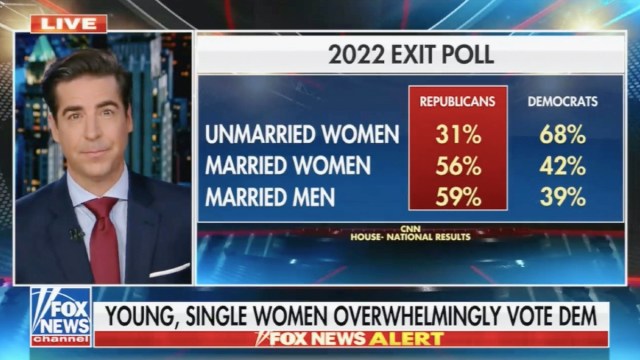 No one was more surprised that the so-called “red wave” failed to materialize following Tuesday’s midterm elections than the talking heads at Fox News. And as the on-air personalities were left scrambling to explain what happened to their audiences, Jesse Watters had a pretty, pretty interesting theory that shockingly, is now blowing up in his face.

“Single women are breaking for democrats by 30 points,” Watter said, alongside a graphic of exit polls broken down by unmarried women, married women, and married men. “And this makes sense when you think about how democrat policies are designed to keep women single. But once women get married they vote republican.”

“Married women, married men go for republicans by double digits,” he continued. “But single women and voters under 40 have been captured by democrats. So, we need these ladies to get married, and it’s time to fall in love and just settle down — guys, go put a ring on it.”

Watters made the remarks on Wednesday night, which were subsequently captured for posterity by The Recount.

We’re sure there is no shortage of single women who would for a man to put a ring on it. But unfortunately, if you’ve spoken to a single women at all recently, the stock of eligible men is, let’s just say, dubious at best.

Case in point! Watters himself was previously married to his first wife, Noelle Inguagiato, who he wed in 2009 and had twin daughters with. However, their marriage fell apart in 2018 after the 44-year-old had an affair with a significantly younger producer on his show, whom he went on to marry in 2019, the same year his divorce from Inguagiato was finalized.

The new couple has since given birth to a son of their own, proving that fairytale endings really do exist.

But yes, you precious rascal of an adulterer — by gum you’ve cracked the case! But unfortunately, as the video began making the rounds on Twitter, the rest of the world didn’t quite see it that way and was all too happy to remind Watters of his past indiscretions.