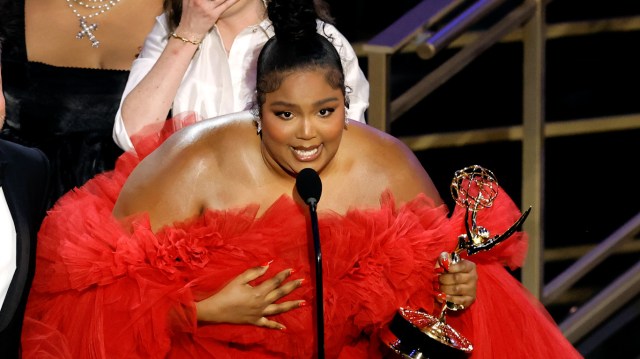 Lizzo is celebrating her win at this year’s Primetime Emmy Awards, after Watch Out For The Big Grrrls took home the Emmy for Outstanding Competition Program. With three Grammys already under her belt, the addition of an Emmy award means that the singer is just two awards shy of gaining EGOT status, and we’re sure she can achieve that.

The competition series saw Lizzo audition women to become Big Grrrls — plus-sized background dancers who will accompany her on her worldwide tour. The series received praise for its authenticity, as it makes progress in regards to the representation of plus-sized women in the media. The show went up against The Amazing Race, Top Chef, The Voice, Nailed It!, and the previous recipient of the award four years running, RuPaul’s Drag Race.

Lizzo took to the stage along with other cast and crew of the show to accept the award. The singer also called for her Big Grrrls to join her onstage, crying out, “I need my Big Grrrls to come down to the stage right now. Right now!” She admitted to being emotional upon receiving the award, as she held back tears and said, “The trophy is nice, but my emotion is for these people who are on the stage with me. The stories that they shared, they’re not that unique. They just don’t get told. Let’s just tell more stories.”

“When I was a little girl, all I wanted to see was me in the media,” she continued, “someone fat like me. Black like me. Beautiful like me. If I could go back and tell little Lizzo something, I would be like, ‘You’re going to see that person, but bitch, it’s going to have to be you.” She discussed the impact of the show and the award for her Big Grrrls stating, “One year ago, these women were filming this television show that would change their lives forever. They are Emmy award-winning superstars who are going on a world tour! Make some noise for my Big Grrrls. I love you so much. God bless y’all. This is for the big girls.”

It is unclear if there will be a second season of the show, as Lizzo previously told Variety that she would only do the show again out of necessity saying, “If I need more dancers, this is the only way I know how to get dancers.” With a Grammy and an Emmy under her belt, the performer just needs to snag an Oscar and a Tony award, which for a woman of her energy and talents is surely attainable.