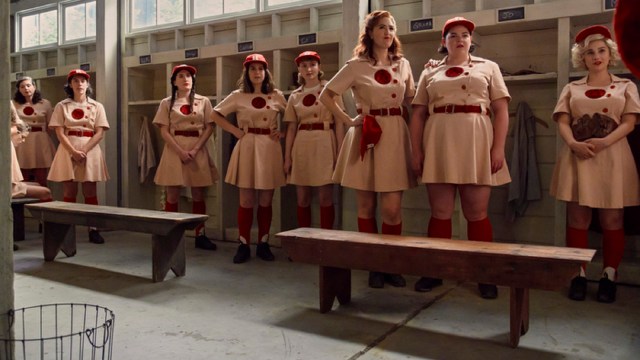 A League of Their Own

Amazon’s new take on the 1992 film A League of Their Own is a hit for the streaming service. It has been critically acclaimed, for touching on LGBTQ+ aspects of the real-life Rockford Peaches the film did not, and, for this, Rosie O’Donnell is quite proud.

O’Donnell — who appears in the show and the original film, but as different characters — makes her views on the project known in a recent interview with Seth Meyers on his talk show. Some of the real Peaches later revealed their lesbian identities, and, when asked about this by Meyers while promoting her role on American Gigolo, O’Donnell — who came out in 2002 — says it is overwhelming and can be difficult to grasp just how things have progressed to the point they have now in society and media.

“When I watch the show, I cannot believe we’re able to have representation. When we did the actual series, we would meet the original members of the Peaches. And they’d be like, you know, 88, and say ‘uh, this is my um roommate Betsy.’ I’m like ‘oh hi, Betsy, um obviously you played shortstop.’ And she’s like ‘yeah I did,’ and I’m like ‘okay, and how long have you guys been roommates?’ ‘Oh, 52 years.’ And it’s just, society has changed so much. People don’t realize [what things were like].”

From here, O’Donnell shifts into using the previous cultural landscape to explain why director Penny Marshall did not touch on this part of the team and league they played in her original work. Essentially, at the time, few if any public figures were out, and, in those days, revealing one’s sexual orientation could destroy careers. O’Donnell also says there is more work to do on the path to a more perfect union for those who may be different, but, respect is first and those behind the show are killing it.

“Why didn’t Penny [Marshall] add that? Well, in 1991 when we were shooting it, nobody was out! KD Lang wasn’t out. It was a different time. And I couldn’t really believe where we have gone in the 30 years, although there’s a lot more to go, and I think representation is the first step, Abby Jacobson hit it out of the park, so to speak, in this League of Their Own. She really did.”

The television adaptation of A League of Their Own has eight episodes, available to watch now on Prime Video.