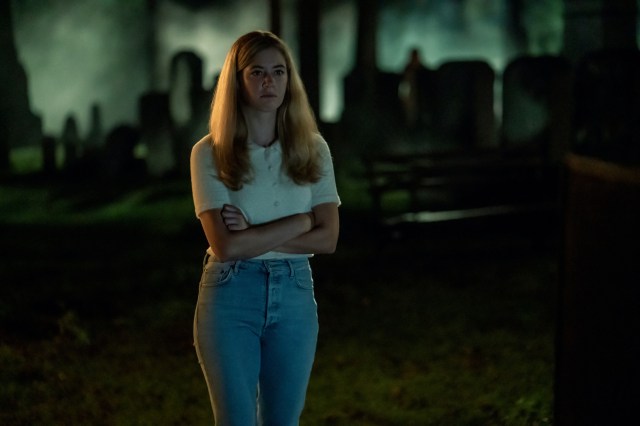 As the season finale of Pretty Little Liars: Original Sin comes out on Thursday, it’s time to unpack the theory that Kelly Beasley was actually the one killed at the dance in the second episode of the season instead of her twin sister, Karen. Not only are fans theorizing that it could actually be Kelly who’s dead, but also the character Faran. She went to great lengths to try and figure out if Kelly was actually Karen.

Faran had Henry, her new beau, look at Kelly’s feet to see if there were self-harm marks after Madame Giry explained what the Beasley girl had done. While there were no self-harm scars, there was one from where the razor blade pierced Karen’s foot. Henry tried to talk Faran out of it but she still insisted it was Karen.

To the audience, what may have sold that it is in fact Kelly who survived is the chase scene between her and the masked killer. As the masked killer stood over her she continued to cry, insisting she was Kelly over and over. Eventually the killer went away, leading us to believe she really is Kelly. However, if you log onto the Pretty Little Liars: Original Sin Reddit, not all of the fans are too convinced.

One theory behind Faran’s believing it’s Karen instead of Kelly is that perhaps the two girls swapped places that day in ballet for some reason. That would explain the razor blade scar on Kelly’s foot and why it was there. The two have switched places at least once in the show, that’s confirmed, so it wouldn’t be too out of the box for them to switch again.

A long and well thought out theory is one that comes from Reddit user 3000throwawayacc. They theorise that Kelly and Karen swapped places at the dance due to Karen having already begun receiving threatening texts from A before the rest of the liars, just like Ali had in the original series. Like this user says, twins switching places isn’t something new in the Pretty Little Liars universe, so it’s almost expected at this point.

There are multiple theories as to who’s who and which twin was killed, all in all though, no one knows for sure. Karen and Kelly are very similar, so perhaps Kelly is just acting more like Karen who was always the more popular and meaner twin? The theories are endless, but this subreddit is definitely a good place to start.