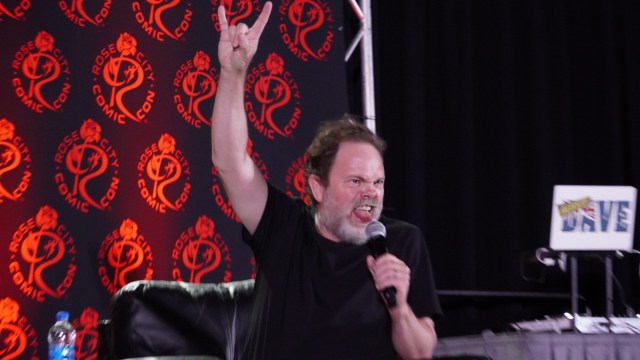 Rainn Wilson is revealing one of the most awkward aspects of filming The Office probably came from him. It was awkward — for everyone else, that is — due to a particular character choice with which Wilson imbued his hierarchy-obsessed Assistant to the Regional Manager, Dwight Schrute.

When one fan asked Wilson what the most awkward part about filming The Office was, at a recent panel he hosted at Rose City Comic Con in Portland, Oregon, Wilson admitted he was the source of it.

“Well, I think one of the choices I chose to make with Dwight early on was that he didn’t have spatial awareness. So he would often stand awkwardly too close to his cast members. So any chance I had an opportunity, especially with Jenna [Fischer], my dear friend Jenna, to kind of stand too close to her, especially with my groinal area being inappropriately close to her face. Actually, that wasn’t awkward at all, I rather enjoy it. But I’m sure it was awkward for her.”

During that same panel discussion, Wilson talked about some other little-known facts about filming The Office, including that there is an unseen extended cut of the failed backdoor pilot episode of the Dwight-focused “The Farm,” that Creed Bratton was the most fun co-star to work with, and that production of the show once had to shut down due to the entire cast succumbing to uncontrollable, contagious laughter during the episode “Lecture Circuit: Part 1.” In particular, Wilson said the scene in which Jon Krasinski’s Jim Halpert and Dwight set up the birthday party for Mindy Kaling’s Kelly Kapoor — and Dwight puts up a sign that simply says “It is your birthday” — was what caused the entire cast to lose it.

Wilson, who was the star of James Gunn’s Super in 2010, seemed to enjoy the convention and even shared a fan-created action figure of The Crimson Bolt, the character from the movie.

In terms of what’s next for Wilson, he is set to portray Dr. Demento in the upcoming musical biopic parody film Weird: The Al Yankovic Story, starring Daniel Radcliffe, when the film releases on November 4.