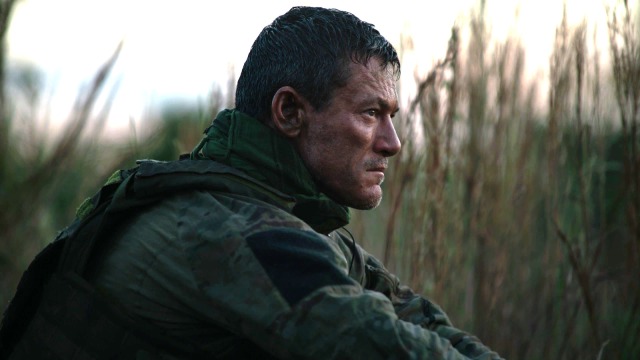 via Apple TV
Review of: Review: 'Echo 3' is all style over substance

'Echo 3 is' a polished piece of gung-ho machismo, which never lives up to its intriguing premise. Featuring Luke Evans and Michiel Huisman as members of an elite commando unit, this globetrotting melodrama consistently fails to deliver a decent story.

On paper, Echo 3, should be an action-packed no-brainer. It should be blatantly macho, flagrantly gung-ho, and rinse through thousands of rounds of artillery on the way to a patriotic conclusion – but apparently, this is too much to ask.

Based on the series When Heroes Fly by Omri Givon, which in turn was adapted from a novel by Amir Gutfreund, this high-octane live-action Call of Duty clone should effortlessly touch every base on its way to satisfying audience expectations. That Oscar-winning screenwriter Mark Boal (The Hurt Locker) not only fails to deliver those essentials, but in fact turns in something quite mediocre, is disappointing.

Opening beneath the canopy of a South American rainforest, audiences bear witness to the mistreatment of unknown hostages, being corralled towards an uncertain fate. Forced to their knees by armed militia awaiting the execution order, sun-kissed closeups capture a tropical paradise before gunshots break the silence.

Following a six-month time jump, an unidentified bride applies eye makeup, while friends and family gather to celebrate her nuptials. Boal uses this traditional setting to acquaint his audience with the Delta squad of special operatives, who will shape this story going forward. Prince (Michiel Huisman) is the groom, Bambi (Luke Evans) his father-in-law, while other members of importance include Drifter (Dominic Fumusa) – who will soon bite the big one.

Predictably, after everyone has been given their five minutes of screentime, this slick military unit are called away to a hostage situation in Afghanistan. Cue snow-capped mountains, Taliban extremists and blizzard conditions – all filmed in pin sharp perfection with rugged features and flawless military precision. Not only illustrating the crack commando squadron in all its regimented glory, but providing Bambi and Prince with a dramatic jump start as Drifter gets gunned down.

Such is the nature of Echo 3 going forward, that when Prince’s wife Amber (Jessica Ann Collins) gears up to undertake a research trip to Colombia, alarm bells start ringing. With foreshadowing aplenty in the form of military grade distress beacons being blatantly concealed, while arguments about her heading into danger are thrown about, Amber’s abduction feels like a foregone conclusion – one that ensures that audiences remain unsurprised for much of what follows.

That being said, Echo 3 is not so much bad, just decidedly average and predictable. Evans, Huisman, and a committed ensemble cast do their best to inject some tension into this rather pedestrian hostage drama – but often come off as over-earnest. Their dynamic as husband and father to Amber plays well against the backdrop of intermittent sorties into enemy territory and minor domestic squabbles. However, there needed to be more originality on show for their efforts to feel worthwhile.

In the cinematography department if nowhere else, Echo 3 smacks of Tony Scott, as over-saturated closeups linger on angst-ridden faces. Elsewhere, slick drone shots and slow-motion action sequences up the style ante, while designer dirt clings to chiseled features. As the narrative takes in Colombian shanty towns and ornate government architecture on its way to making sense of this story, rescue operations are bungled, and red tape drags Echo 3 out into yet another episode.

Subplots involving South American journalists and obstinate Embassy officials also fail to provide depth beyond the fire fights. Martina Gusman does her best to imbue her revered reporter Violeta with substance and subtlety, yet somehow, she soon becomes a plot device as attempts to negotiate Amber’s release go south.

After three episodes of close to an hour each, Echo 3 fails to inject the requisite amount of momentum. As much as Amber’s plight feels tangible, that perfectly polished cinematography and faintly orchestral accompaniment can never make the peril feel real. This Apple original might be hugely stylish and slick when it comes to production design, location choices and visual panache – but somehow this is never enough to emotionally invest.

Echo 3 is proof that even with an Oscar winner putting pen to paper, nothing is guaranteed. Upon closer inspection, there is nothing really wrong with this show, aside from the fact that audiences have seen it before. This by-the-numbers melodrama might have all the right whistles and bells, but yet again a flimsy story lets down an otherwise promising premise – illustrating that even with Apple in your corner, a story is nothing without substance.

Review: 'Echo 3' is all style over substance

'Echo 3 is' a polished piece of gung-ho machismo, which never lives up to its intriguing premise. Featuring Luke Evans and Michiel Huisman as members of an elite commando unit, this globetrotting melodrama consistently fails to deliver a decent story.