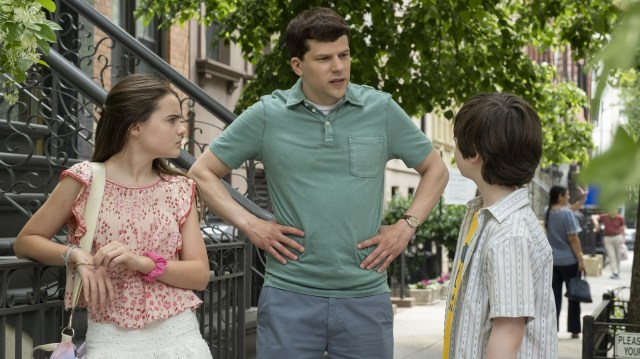 Image via FX Networks
Review of: Review: 'Fleishman is in Trouble' gets ruthlessly on relationships

Jesse Eisenberg, Claire Danes and Lizzy Caplan headline the exceptional 'Fleishman is in Trouble,' an on-point adaptation of the New York Times best seller from Taffy Brodesser-Anker about marriage, divorce and those bits in between.

Adapted by author Taffy Brodesser-Akner and out now on FX, Fleishman Is in Trouble proves to be an incisive and intelligent exploration of contemporary relationships.

Based on the New York Times best seller, it centers on Toby Fleishman (Jesse Eisenberg), who finds himself suddenly divorced after 15 years of marriage. With a well-established career in medicine and a morally upstanding approach to his job, everything seemed to be fine.

His now ex-wife Rachel (Claire Danes) was a wildly successful theatrical agent, while between them they had two perfect children in Hannah (Meara Mahoney Gross) and Solly (Maxim Swinton). Until recently, they had also shared a very comfortable life on the Upper East Side, mixing in affluent social circles with occasional trips downtown to see the people he liked.

Set adrift on the Manhattan social scene after a lengthy hiatus, Toby finds himself utilizing app-based technology to bolster his flagging spirits. Aided by the absence of a marital status, he tackles this unexplored territory whilst attempting to reconcile his new situation. Things unfortunately head further south when Rachel fails to pick up their children for the weekend, leaving Toby forced to improvise.

What showrunner Taffy Brodesser-Akner has done here, with the aid of Lizzy Caplan’s Libby, is capture her authorial voice through voiceover. Coupled with an impeccable ear for dialogue delivery and Anker’s ruthless eye for human frailty, they both bring this world to life – moving beyond the expositional advantages of voiceover to dig deeper into character, and reveal Toby’s inner conflicts.

Improvising on the fly with Hannah and Solly in tow, audiences tag along for the ride as he attempts to multi-task his way out of sticky situations. For an extended period of time in those first four episodes, Rachel is only present through flashback as Toby subconsciously sifts through different phases in their relationship, bouncing back and forth between the past and present, allowing audiences to experience pivotal moments which all seek to explain his here and now.

Thankfully, Toby has a great support network in best friends Libby and Seth (Adam Brody), who ground the situation while events gradually escalate. From his first moments of infatuation through to those final acts of verbal recrimination decades later, writer Brodesser-Anker encapsulates their relationship perfectly. An approach which is elevated in no small measure by the presence of Eisenberg in the title role.

As a dramatic actor he can turn his hand to anything, it seems. From small indie roles through to mainstream tentpole performances, innumerable films have benefited from his presence. A fact which is hammered home in the opening minutes of episode one, as Toby is plunged into freefall following Rachel’s decision to disappear. As both an intellectually moral husband and doting father, Eisenberg succeeds in giving Toby an everyman quality, whilst allowing his imperfections to provide emotional depth.

Danes is equally important as Rachel, guiding this roller coaster ride of a relationship through numerous peaks and troughs, with her passion, drive and confrontational nature proving to be the defining characteristics in a union drifting towards divorce. Ultimately, this adaptation successfully blurs the lines between hero and villain – deciding instead to paint in shades of grey when it comes picking sides.

Fleishman Is in Trouble also dramatizes the dating landscape and provides comedic context, without trivializing cultural advances or passing judgement. It builds this into a story which thrives by embracing universal themes and pointing out common ground. Despite the location, this show will strike a chord with global audiences for that reason, as relationships in all their forms and functions play out the same way. Country specific customs may change things slightly, but on a fundamental level, our need for companionship defines us all.

Beyond the verbal fireworks and helter skelter revelations which come thick and fast, this is what makes Fleishman work so well. With Brodesser-Anker manning the tiller, this adaptation melds elements of Annie Hall with Sex and the City, by way of When Harry Met Sally. There is also a philosophical tone which underpins this vibrant piece of drama, as Toby and Rachel draw an indiscreet veil over the remnants of their relationship in ruins.

Neither moral fable nor pragmatic parable, this series excels at finding human moments amongst the tragedy of disconnection. All too close to the bone and no less entertaining for it, this is another home run from FX, who continue to produce some genuinely moving character pieces.

Review: 'Fleishman is in Trouble' gets ruthlessly on relationships

Jesse Eisenberg, Claire Danes and Lizzy Caplan headline the exceptional 'Fleishman is in Trouble,' an on-point adaptation of the New York Times best seller from Taffy Brodesser-Anker about marriage, divorce and those bits in between.