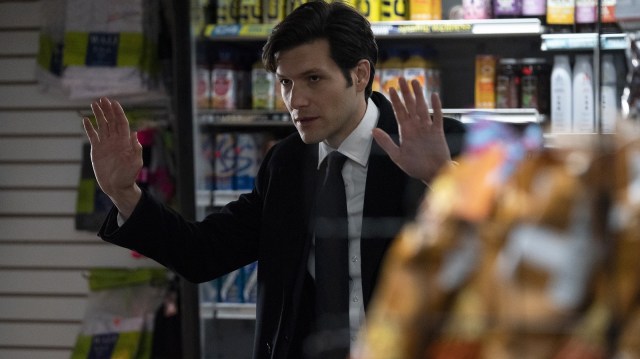 Image via Peacock
Review of: The Calling proves to be another small screen success for maestro David E. Kelley

Grounded by an exceptional ensemble cast, The Calling is worthy of a large audience.

Avraham deeply spiritual orthodox Jew, who forges faith with his role as a detective in the New York City police department. Solving cases, showing compassion, and appalling the tenets of Judaism alongside deductive techniques, to solve crime one step at a time. A combination that proves dramatically compelling and manages to deliver an original twist on traditional genre conventions.

As with almost every other David E. Kelley creation, The Calling is intentionally character driven. Over the combined running time of this slow burn police procedural lives are intrinsically linked, situations escalate and circumstances dictate behavior. Detective Avraham is a master of mood manipulation, coaxing confessions and admissions from detainees, without resorting to strong-arm tactics. Half authority figure and half religious counsel, the trick behind The Calling comes from casting Jeff Wilbusch in that lead role.

Compelled by his Judaism to see crimes as religious transgressions rather than pre-meditated acts of wrongdoing, Avraham is a different kind of detective. By treating his interrogation space more like a confessional booth, he forces others to drop their guard and unburden themselves. That is what makes The Calling so intriguing from the get-go, especially when Avraham’s work ethic is disrupted by his new partner Janine Harris (Juliana Canfield).

Aside from the pivotal plot point which involves a missing boy, how Avraham and Janine interact determines much of the interplay on a dramatic level throughout. Her desire to learn more about a faith that traditionally sidelines women means that Avraham is forced to connect with someone else rather than being able to operate without impunity. This not only opens up opportunities for moments of humor but also reveals Avraham to be more emotive than some might expect.

Outside of their central relationship, supporting players include Avraham’s boss Captain Kathleen Davies (Karen Robinson), who indulges him due to his exceptional arrest record. Detective Earl Malzone (Michael Mosley) completes the principal players in this gripping police drama.\

Vincent (Charlie Basso) is tutored in English by his neighbor Zack (Noel Fisher), an aspiring writer with a partner Dania (Annabelle Dexter-Jones), and their young baby. Vincent’s father Leonard is overbearing, unsupportive, and disappointed in a son he considers weak. One Sunday, without warning, Vincent goes missing, and not long after, the police get involved. This is the basis for a tale that includes illicit thoughts, physical transgressions, and intimate moments of human weakness, giving Kelley the opportunity to play in his favorite sandbox.

What starts out as a tale centered on one boy soon expands to include some other people, not least of which are his parents, their neighbors, and disgraced college professor John Wentworth (Tony Curran). Outside of those who live inside under cover and in comfort, this homeless ex-educator adds an additional dramatic layer to a mix already packed with potential.

In the role, Tony Curran (The Flash) exudes dignity, imbues Wentworth with an inherent intellect, and proves an equal match for Jeff Wilbusch when it comes to on-screen presence. Their dynamic alongside that established with Avraham’s contemporaries in the police force, makes The Calling an instantly engaging proposition, that simply slots together like so many puzzle pieces.

The tone is perfectly balanced and in terms of pivotal plot points, there is a flawless nature to it, while underneath that these actors provide some understated character work. In almost every sense The Calling comes together seamlessly and provides just the right amount of dramatic tension at just the right moment. The conclusion not only sets the show up for season two but confirms that Kelley remains the king of his particular castle.

By the end of episode three, those elements all come together as momentum, which had been gradually building in the background, gathers pace and suspects start revealing themselves. It is then, in those remaining minutes of screen time that The Calling gives up a few more secrets and cements Avraham as another compelling character in Kelley’s arsenal that is sure to remain on screens for a number of years.

The Calling proves to be another small screen success for maestro David E. Kelley

Grounded by an exceptional ensemble cast, The Calling is worthy of a large audience.