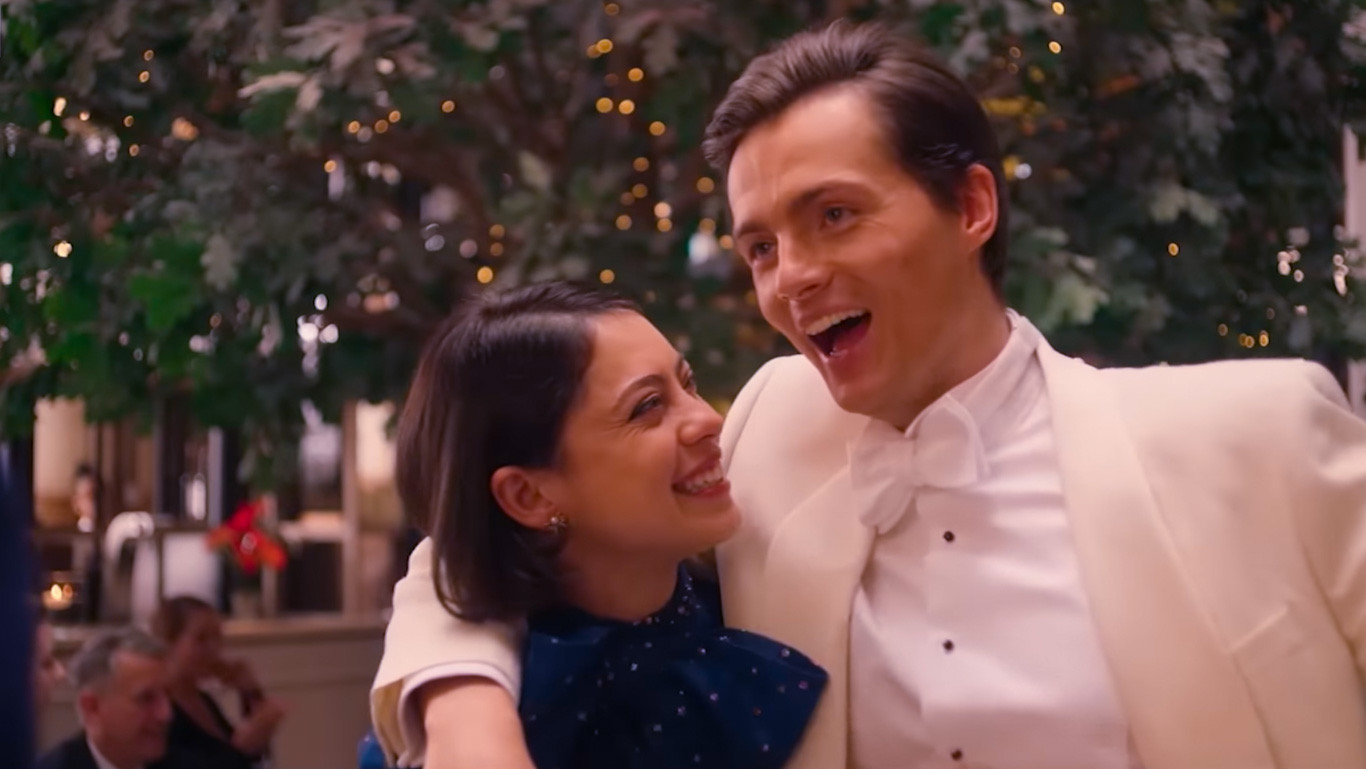 Rarely does a rom-com come along which so seamlessly side steps expectations to deliver something exceptional.

Coming off like the evil twin of Richard Curtis rom-com classic Four Weddings & A Funeral, this off-kilter romantic steeplechase is galvanized from the off by Katie (Rosa Salazar) and Stefan (Gavin Drea). Opening like the end of The Graduate (Mike Nichols), Stefan is sent packing by an exasperated Katie, who is moments away from marrying Hugo Delaney (George Webster), an overindulged member of a very powerful family, which is ruled over by Delaney Senior (Ivan Kaye). What follows is a hugely inventive series packed with original moments that honestly seeks to break new ground.

Following Stefan’s ill-advised stunt, he soon finds himself in police custody being questioned by Metts (Jade Harrison) and Donahue (Jamie Michie) — two detectives looking for a multiple murderer, someone stupid enough not only to dispatch the whole Delaney clan at a wedding reception, but gatecrash the ceremony beforehand. With that in mind, he quickly becomes prime suspect thanks to some serious back alley canoodling with Katie and a mild case of infatuation.

What follows is a chance encounter with the runaway bride, an audacious rooftop escape, and various modes of high-speed pursuit, which end on an idyllic stretch of water. Throughout this fraught set piece, chemistry between our would-be protagonists is instantaneous and electric, made all the more intriguing as our hapless pair tear across the Highlands seeking a safe haven.

With most of her in-laws dead from poisoning and more than one party seeking justice, they narrowly avoid capture at every turn. Creator Oliver Lyttelton and writer Daran Johnson have worked really hard to avoid rom-com cliches here, leaning into recognized tropes which unpack the plot in unpredictable ways, giving this Hulu original series a serious amount of heart and soul for those who know where to look.

Much of that heart comes through Rosa Salazar (Birdbox), who perfectly balances street smarts and savvy self-awareness with acres of pathos. Katie is a force of nature who keeps some serious skeletons hidden away for the unwary suitor. Gavin Drea (Vikings: Valhalla) makes sure that Stefan remains a hapless accomplice in opposition to Katie’s resourceful number, a characteristic which ensures that Stefan remains harmless rather than earning stalker status early on.

Strong support in flashback comes from Stefan’s close friends Jackson (Omar Baroud), Anil (Bhav Joshi), Suji (Ioanna Kimbook), and Leila (Callie Cooke), a close-knit ensemble who almost steal the show out from under both leads. Their collection of killer punch lines, delivered at a multitude of car crash wedding receptions, are impeccably caustic in their pitch-black payoff, making Wedding Season feel like an R-rated Curtis classic.

Elsewhere, there are some burgeoning comedy moments between Metts and Donahue that play out perfectly. Attraction in the workplace is addressed with panache, as professional and personal lines merge, creating some genuinely endearing scenes as these detectives succumb to their feelings. Not only are the creators clever in allowing this to mirror emotions between Stefan and Katie, but it also breaks up tension by gently mocking the importance of appearances.

Aside from that, as this fiendish series unfolds it morphs into something more akin to a thriller than any type of rom-com audiences might recognize, darker elements are introduced; more of Katie’s past comes back to haunt her, while Stefan continues deeper down the rabbit hole. As trips to Las Vegas, card counting in casinos, and cunning distraction techniques take the place of situational character comedy, Wedding Season ups the ante once again.

As the flashbacks keep filling in those missing pieces and timelines merge, there is a tangible sense of storm clouds looming for all concerned. Fake names, ex-boyfriends, and medieval interrogation techniques take the place of awkward after dinner speeches. Katie also gets more elusive as the net begins to close in on her real intentions. That is when the Wedding Season delivers its final blindside to audiences who thought they had things figured out.

If nothing else, this Hulu original should be celebrated for pulling off something so riddled with risk. Without the perfect chemistry on screen this could have fallen flat, and without the ideal combination of supporting players, a similar fate waited in the wings. However, for those after a challenging rom-com hybrid with backbone, audiences would be foolish to pass up this mixed-up matrimonial thriller for something less challenging.

Rarely does a rom-com come along which so seamlessly side steps expectations to deliver something exceptional.