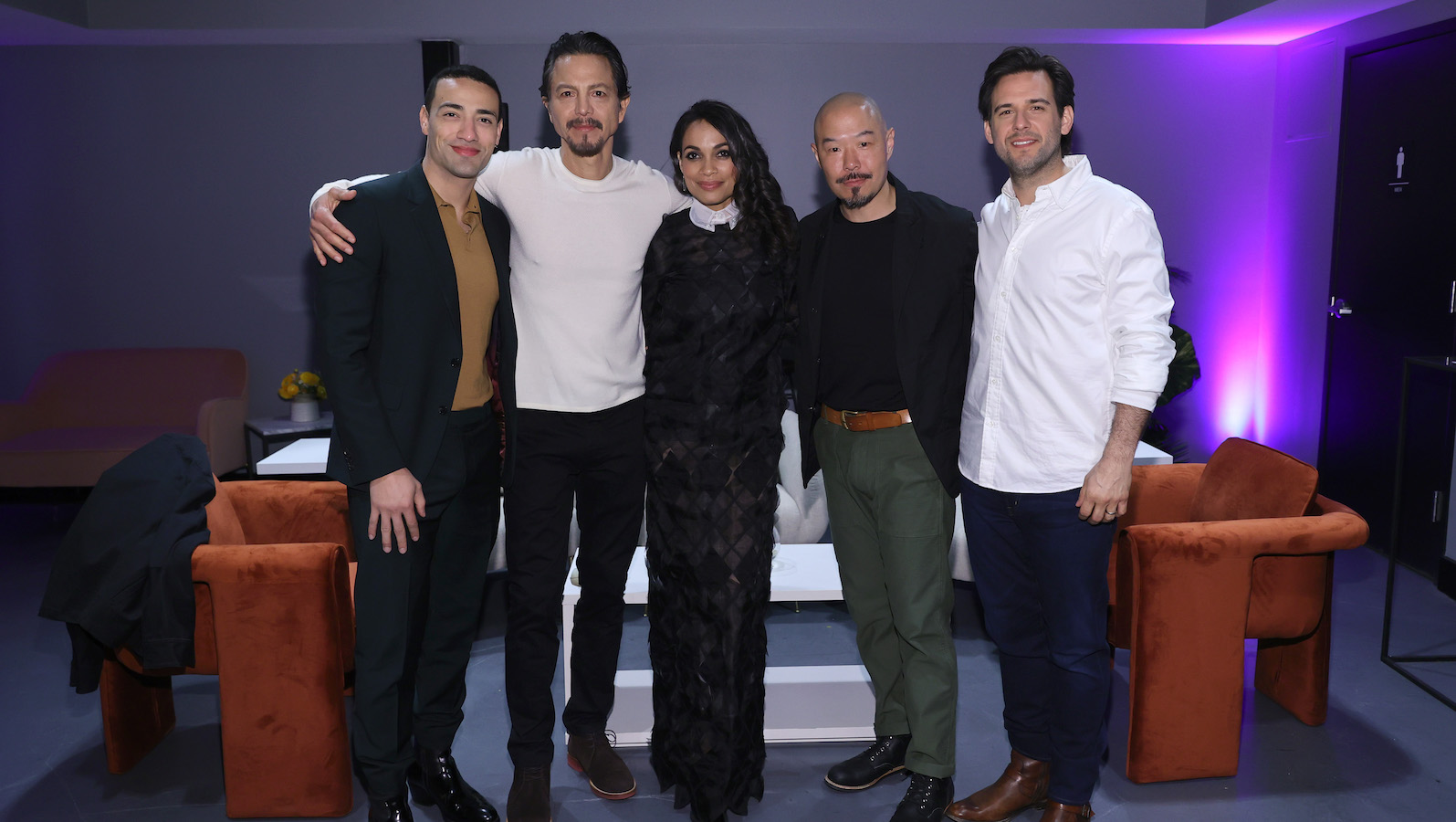 In DMZ, the new HBO series based on the DC graphic novels, leopards casually stroll around Manhattan, and New Yorkers treat them as New Yorkers do, walking past completely unfazed.

On March 13, cast members Benjamin Bratt, Rosario Dawson, Hoon Lee, Freddy Miyares gathered at the WarnerMedia House at SXSW to discuss the series alongside Roberto Patino, an executive producer of the new show from Ava DuVernay.

The show follows Alma Ortega (Dawson), a doctor who separated from her son years prior while trying to escape Manhattan as it became a DMZ (demilitarized zone) during the second American Civil War in the not too distant future. She makes it out, but has no idea what has become of her son, so she risks her life reentering the borough, which has descended into chaos as those left behind violently created new power structures.

While DMZ is very much a dystopian show, it isn’t science fiction. In the adaptation of Brian Wood’s series, the city is redrawn with a touch of magical realism, as flora and fauna creep into the concrete jungle, but it remains very much rooted in reality, often jarringly so.

“One of the kind of fundamental refrains starting out was this is a DC property,” says Patino. “DC is full of superheroes. This is a show about humans.” To that end, the adaptation of the series, which began in 2005, isn’t about current politics in any specificity, but rather focuses on the human toll of power struggles.

For Dawson, the script reminded her of growing up on the Lower East Side, and reflects the ways in which marginalization forces people to build their own communities. The actress related to Alma’s “scrappiness;” it’s the kind of attitude that earned her a breakout role in Kids, another tale of how truly wild shit can get when people in charge avert their eyes.

Entering a world populated exclusively by people who had been forgotten appealed to Dawson, who recently produced Split at the Root, a documentary about family separation at the U.S. Border, which also premiered at SXSW. “It’s going to actually represent the majority of the planet,” she says. “The majority of the planet is, is marginalized, held back, and not uplifted as protagonists of the story.”

“I think DMZ is a perfect example, [and] indicative of the industry finally catching up with reality,” says Bratt, relishing the project’s diversity on and off-screen, which the cast credits DuVernay for making possible.

When Alma returns to Manhattan, she encounters Bratt’s Parco Delgado, an ex-military man who uses his training to ascend into power as a gang leader. Delgado’s son, Skel (Miyares), his second in command, is nonetheless shaping up to be an even more sinister presence than his father. Skel looms large in the first episode, via whispers of his reputation, and a hit list that takes up the entire side of a multi-story building with plenty of names crossed out, but the reclusive man behind it doesn’t appear in the pilot.

Skel’s thundering absence ended up mirroring real life in unexpected ways, minus the hit list. They shot the pilot just before the pandemic, bringing in hundreds of extras pushed up against each other, but then had to wait a year and a half to shoot the remaining three episodes. “There wasn’t going out of my way to get inspiration. I was sort of taking the world as it was,” says Miyares, who previously worked with DuVernay on When They See Us. Upon their return to set, the actor treated the cast to homemade pasta, which is worlds more wholesome than anything Skel is up to.

Hoon Lee’s Wilson, who worked with Alma as an orderly in the before times, completely transformed his place in life, and runs Chinatown with the protection of some very devoted female bodyguards.

Suffice to say, the men all rose to power in the DMZ by unsavory means, recreating the environment that kept them down in the first place.

Dawson references Audre Lorde’s book, The Master’s Tools Will Never Dismantle the Master’s House, while discussing Alma’s journey, noting that being a mother and a doctor does not exempt the character from being susceptible to the temptations of power.

“It’s not a clear-cut case of good versus evil. “That’s why I love Star Wars so much. You can be a lightworker, and you can go to the darkness,” says Dawson, who recently joined the franchise as Ashoke.

“There’s cycles in place that [have been] established for centuries now that are very hard to break,” says Lee. “At a certain point, the pushing needs to stop. Someone has to absorb that blow,” adds Lee. “But there has to be a catalyst, you know, something that changes that someone realizes the cycle that they’re in.”

Still, Patino stresses there is an optimism to the show, or at least significantly more optimism than in the original graphic novels, which isn’t very hard. The hypothetical American Civil War is a pretty good catalyst for dismantling harmful systems, both inherited and self-made, and finding the humanity beneath it all.

“There is something that’s missing when you gentrify a place, and you kind of mask it with capitalism,” says Dawson, a message SXSW attendees should take to heart as they walk around Austin’s cryptocurrency logo-plastered streets. “There’s something that does get lost in this, it’s kind of beautiful to be able to explore what that could look like again.”

DMZ premieres Thursday, March 17 on HBO Max, and yes, the cast wants to do another season.