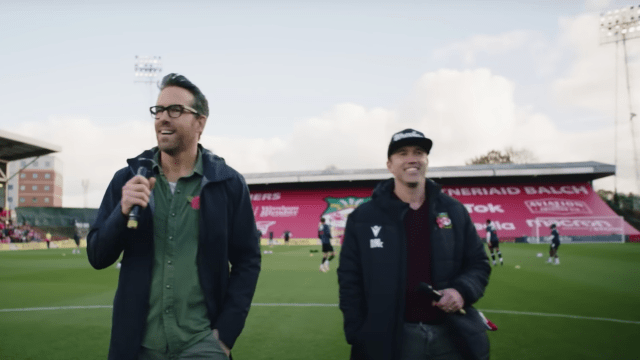 Ryan Reynolds and Rob McElhenney have some big news to share about their soccer team that is the focus of the FX docuseries Welcome to Wrexham.

Not only has the show received two Critics Choice Awards nominations, but a second season has also been confirmed. However, there’s a third very important announcement that Reynolds and McElhenney cited as the main reason they want fans to call in fake sick to work on Tuesday.

The Wrexham Red Dragons will be playing a match against the Blyth Spartans on ESPN2 on Tuesday at 3pm EST, noon PST, giving you the perfect excuse for “quiet quitting,” as Reynolds and McElhenney explained in a video uploaded to Twitter.

As a testament to how much of a good sport Reynolds is, the Deadpool actor also gave a shout-out to a fan of the opposing team. Reynolds explained that while the 6-year-old Leland is a Blyth Spartans supporter, he’s also battling cancer and is in need of a bone marrow match. So Reynolds took the time to signal-boost Leland’s quest for finding a donor.

McElhenney, the star of It’s Always Sunny in Philadelphia and co-owner of the Wrexham Red Dragons, also took the time out of his day to offer a slight correction. He accidentally mispronounced the word “Blyth” of the opposing team in the video and explained part of owning a U.K. soccer team involved “learning new pronunciation.”

You can currently watch the first season of Welcome to Wrexham on Hulu.