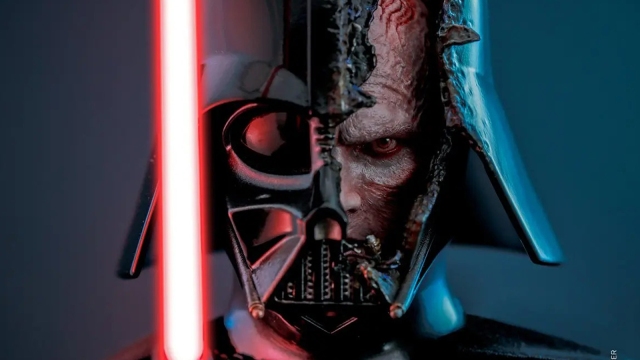 After appearing in Obi-Wan Kenobi, Star Wars fans can now get a glimpse beneath the mask of Darth Vader thanks to a new figure coming to stores from Hot Toys.

Revealed earlier today, the ⅙ scale figure showcases Vader from his final battle in the Disney Plus series, donning a cracked helmet with the face of Anakin exposed for all to see.

The detail in this figure is unmatched and provides fans a more detailed look at the character than was even showcased during Obi-Wan Kenobi. You’ll have a chance to purchase two different looks for Vader from the show.

With the cracked mask, the regular version of Vader has an LED-lit base to display the Sith lord in all of his glory. Those who purchase the Deluxe Edition will get interchangeable additions to alter the figure’s look. This includes an interchangeable helmet and a chest control panel.

Also, in some markets, the Deluxe Edition comes with a hologram miniature of the Grand Inquisitor and a Holoprojector as a bonus.

Right now, the figures don’t have any price or release date attached, but that information should come sometime soon.

Previously, Hot Toys revealed an upcoming Obi-Wan figure taken from the same battle at the end of the character’s titular show. You can check out this product and its price tag available for pre-order now here.

Hot Toys have outdone themselves with the quality of this new figure. If you’re a Star Wars fan who loved Vader’s appearance in Obi-Wan Kenobi then this is a must-have piece for your collection.