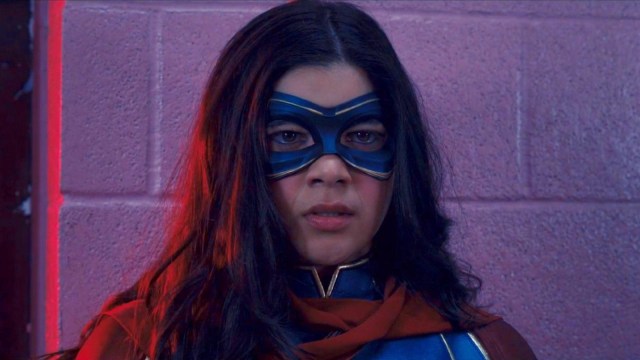 Being ardent fans of the Marvel Cinematic Universe for decades, we are now well-versed in its ways, especially the fact that one shouldn’t expect a film or show to answer every question it raises by the time it ends. Instead, fans are on the lookout for more confounding mysteries to join the long list of existing enigmas. And as expected, the much-anticipated Ms. Marvel finale has also left behind a string of puzzling plot twists that are bound to affect the MCU as we move forward.

The closing minutes of the Ms. Marvel finale only offered one answer (something that has already been officially confirmed), without drowning itself in the muddy waters of never-ending confusion — that Kamala’s story will continue in the upcoming film, The Marvels. Apart from this, the 49-minute episode does little to tie up the many plot threads it left dangling.

With the Department of Damage Control on the hunt for Kamran, Kamala calls Kareem (of the Red Daggers) to help her in getting him out of Jersey City. Even though the Red Daggers are sworn enemies of the Clandestine, he agrees to help and asks her to get Kamran to the harbor by midnight as he knows “someone who can get him out.” It can easily be some obscure member or connection of the Red Daggers who could have helped and it is possible that it is nothing but a throwaway line as getting Kamran out of town was the priority.

But seeing that it is the MCU we are talking about, it is very much plausible that this mystery aide of the Red Daggers is actually someone integral to the ongoing Phase Four. Apparently, this person is important enough to be explicitly mentioned instead of Kareem simply saying that he will help Kamala and Kamran. But for now, the question remains unanswered as when we see Kamran arriving in Karachi and meeting up with Kareem, he is all alone.

Will Bruno stay at Caltech or will he miss Kamala too much and return home?

While Kamala is painfully unaware of Bruno crushing on her, Ms. Marvel fans have been secretly rooting for him to win her heart. Unfortunately, for now, he and his not-so-hidden feelings have packed their bags and taken up residence in Caltech. But how long will he stay there?

Though he definitely thinks that having some distance from Kamal might cure his lovesick heart, we all know that he will continue loving her. So, will he be back in the picture when Kamala returns in The Marvels — or perhaps in Ms. Marvel season two — as her loyal friend? And even though Kamala will take her sweet time to realize that the perfect guy has been in front of her all along, won’t she still need him as her trusted sidekick who does the research and makes cool gadgets for her while she is busy kicking asses?

Is Deever going to go rogue now that she’s been fired?

At this point, the MCU has enough bad guys -— with plans for more future villains — that it doesn’t need to add more to the list, especially when the likes of Kang and Hercules exist. But Ms. Marvel went out of its way to paint the DODC agent, Deever, as the ultimate baddie, who hates children and superheroes. And when the two are combined, she actually throws caution and strict orders from higher-ups out of the window to hunt them down.

She is now a free bird, with no strings attached as she was fired for trying to gun down a bunch of kids. But while she no longer has the power of DODC backing her, it is evident that she still retains her overly obvious hatred for superpowered beings. Now, Kamran, Ms. Marvel, and the rest who helped the duo are on her list as well. What is stopping her from being a non-superpowered yet still rather lethal threat to Kamala and her friends? The next time Kamala embarks on a mission, will she have a revenge-hungry Deever on her tail?

What exactly is the DODC up to (since we still don’t know)?

The Department of Damage Control has been on the MCU scene since the events of Iron Man 2 though it became a standalone department under the government of the United States after the Battle of New York. But while the DODC had been operating pretty much in the background before, since Spider-Man: No Way Home, it has become a prominent presence though its motives have become even more muddled.

While organizations like S.W.O.R.D. made their hatred for superpowered beings evident, DODC has so far only expressed the desire to control how they function and to ensure that they don’t disrupt the public peace in their drive to play the hero. But their motives are definitely shady. In Ms. Marvel, Agent Cleary specifically orders Deever to evacuate the school premises and not attack a bunch of kids publicly as he is concerned about the bad press it would bring. So, does that mean if Deever had managed to corner them somewhere far away from the public eye, he would have no qualms about using violence against teenagers?

What is their endgame — is the DODC really just a tame organization hoping to enforce some law and order or is it going to be another S.H.I.E.L.D. with deep-rooted evil roots? Well, hopefully She-Hulk — which will play host to the DODC next — will be ready with the much-needed answers to these questions.

Is Kamran also a mutant?

Stepping on the expectations of many ardent fans of the Inhumans, the Ms. Marvel finale hints that Kamala’s genes carry a certain mutation that allows her to harness the powers of the Noor dimension through the bangle. Seeing that Kamran also possesses powers similar to Kamala now, is he a mutant too? Will the fact that his powers don’t need the bangle to be activated differentiate his status from Kamala?

Is Kamran going to be good or evil in season two?

In the Ms. Marvel comic books, Kamran is an out-and-out bad guy who uses Kamala after joining forces with the villainous Lineage. MCU fans expected his story to have a similar outcome in Ms. Marvel ever since he gained superpowers after Najma sacrificed herself to unlock his powers.

Seeing how unstable his powers were as well as his highly imbalanced emotional state — seeing that he was ditched by his mother and gained powers out of the blue — it wouldn’t have been too surprising if he had turned on Kamala upon learning that Najma died while fighting her.

But Ms. Marvel instead allows Kamala to calm down the raging Kamran, who reins in his destructive powers at the last minute, sees reason, and actually believes Kamala who implores him to not give up. So, is that it? Has Kamran’s arc as the good guy been cemented or is he going to be seen secretly harboring hate for his (former?) love interest in Ms. Marvel season two (which is yet to be greenlit)?

How — and most importantly why — is Kamala connected to Captain Marvel?

Before the post-credits scene of the Ms. Marvel finale, the only connection Kamala shared with her favorite superhero, Captain Marvel, was the fact that her name in Urdu means “marvel.” But in the post-credits scene, we see Kamala’s bangle glowing with a deep purple light before the energy suddenly engulfs her, pushing her backwards through the door of her closet. But the person who gets up isn’t Kamala — our young superhero has been mysteriously swapped with Captain Marvel, who is visibly confused by the situation as well.

So, did this “transport” happen? Is it because of the bangle? We have all seen the severed blue, very Kree-like hand the bangle was on when Aisha found it decades ago. We also know that Kree blood runs in the veins of Carol Danvers. Are the Kree common denominator here and somehow the reason behind the unexpected swap?

But the disturbing discovery of the Kree hand was not the only intriguing aspect of the 1942 flashback. We also get to glimpse a sign of the Ten Rings from Shang-Chi, which means that the rings are somehow connected to the convoluted origin story of Kamala and the bangle. Also, in Shang-Chi and The Legend of The Ten Rings’ post-credits scene, Carol talks about how the rings are more like a beacon, calling out to a powerful source. Is this source responsible for Carol switching places with Kamala?

For now, all we can hope is that The Marvels’ release next year will bring the much-needed answers to at least some of these questions.

All six episodes of Ms. Marvel are currently streaming on Disney Plus.