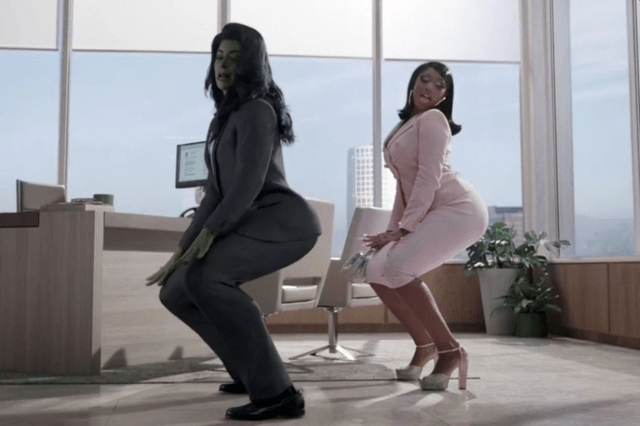 It’s been over a week since She-Hulk: Attorney at Law wrapped up Disney Plus’ Phase Four slate in the cheekiest way it possibly could. Evidently, the ability to personally re-write your own ending by requesting a meeting with Kevin himself makes for quite the power-creep nuances.

She-Hulk wasn’t looking to build the MCU’s stakes. In fact, the show was all but dedicated to letting the world breathe a bit more naturally than the big screen spectacles usually allow. Nevertheless, the show became a hotbed for team-ups and cameos. Bruce Banner, Abomination, Wong, and the much-hyped Daredevil all managed to make their rounds in one capacity or another as Jennifer navigated the equally-tumultuous struggles of being a new superhero, and being a woman in her 30s.

Kevin Feige himself already has plans for Jennifer’s future, but there’s one character in particular that Maliah Arrayah, the on-set reference and body double for the titular heroine, hopes will be added to She-Hulk’s long line of associates. In an interview with Screen Rant, Arrayah was all to happy to explain why a team-up between She-Hulk and fellow Disney Plus heroine Ms. Marvel would result in an intriguing dynamic.

“It would be really interesting to see She-Hulk with Ms. Marvel because Ms. Marvel [just] happens to find her powers. I think there’s kind of a similar sense of excitement. For Jen, her powers are new, and she’s She-Hulk. They’re both embodying these new senses of power, and they realize [it within] themselves. I would be very interested in [seeing them in] the same vicinity and seeing what would happen.”

Indeed, the two women may share the status of “new superhero on the block,” but that’s where their similarities end. For Ms. Marvel, acquiring powers is her wildest dream come true, even if she finds herself a bit too in over her head at first. She-Hulk, meanwhile, was never keen on acquiring her enhanced abilities. While she eventually learns to accept this new part of her life, it wasn’t without nearly a whole season’s worth of hesitation. Who knows what could transpire if they were put in the same room together?

We’re only mostly sure that She-Hulk will be showing up in Daredevil: Born Again, but Ms. Marvel is already confirmed for her theatrical debut with The Marvels, which is set to release in theaters on July 28, 2023.