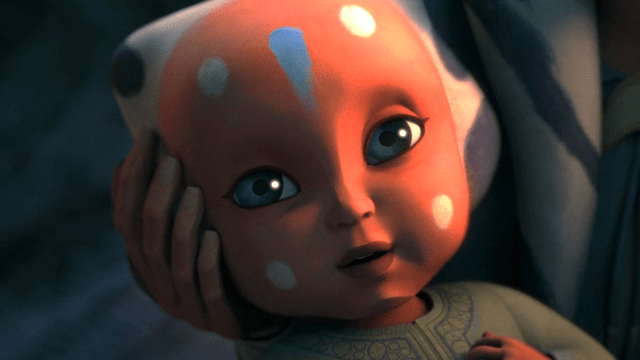 This article contains spoilers for Tales of the Jedi episode 1.

Tales of the Jedi is finally here and Star Wars fans are loving this deep-dive into the backstories of some of the most prominent Jedi in the series. The show comprises six episodes of between 10 and 20 minutes each, opening with the story of fan-favorite Jedi Ahsoka Tano’s earliest days.

The episode — ‘Life and Death’ — opens with Ahsoka’s birth and then jumps forward a year to her first hunt. The Togrutas on the planet Shili live in harmony with nature and we see Ahsoka’s mother taking her on her first hunt.

Things go awry when a saber-toothed cat makes the hunter become the hunted, with the predator grabbing Ahsoka and taking her to its lair. But rather than devour her, Ahsoka befriends the beast, riding it back to a stunned reception from the Togruta village. Realizing what this means, the elder pronounces her “Jedi”.

Move aside Grogu, because it seems Baby Ahsoka is the next big Star Wars cuteness:

Perhaps the whole project is worth it for this:

We demand a Baby Ahsoka spinoff:

Ahsoka Tano continues to appear across Tales of the Jedi, all of which provides more context for her future decisions regarding the Jedi Order. We will soon be seeing her in live-action in Ahsoka on Disney Plus in early 2023, with her on the hunt for Rebels characters Admiral Thrawn and Ezra Bridger during The Mandalorian‘s time period.

More on that as we hear it, but with this opener, Tales of the Jedi knows what fans want.