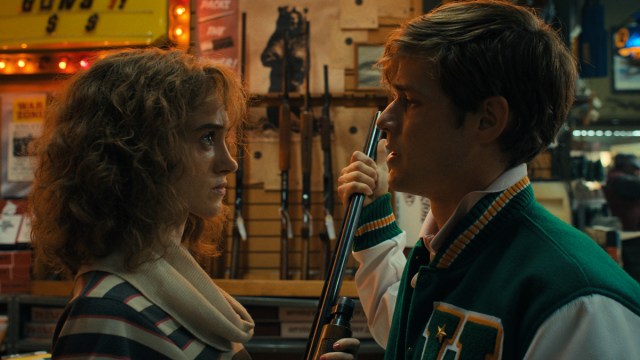 Stranger Things is back again and this time the series has proudly made a comeback with nuanced horror themes and imagery that have successfully evoked empathy, resentment, and fear. The audience is introduced to Vecna, the exceedingly cunning supervillain of the Upside Down who was revealed to be the mastermind behind the life-threatening actions that were unleashed on Hawkins’ inhabitants.

Once again, we encountered an assemblage of our favorite characters unearthing the town’s murky secrets and amassing weapons to obliterate the formidable supervillain. However, as ever in the show’s history, the misadventures are sporadically punctuated by unexpected turns of events and season four is not an exception in this respect.

Along with the numerous subplots that the show addressed — ranging from the much-desired actualization of the romance between Joyce and Hopper to the implication of Will Byers’ sexuality — it was Jason Carver’s appearance and his disastrous contribution to the plot twists that deserve a separate mention.

In a series where the characters’ likeability stems from their zest, enthusiasm, and determination to exhume the darkest truths of the creepy underground world crawling with bloodthirsty monsters and their spidery tentacle lords, Jason Carver’s delusions — reflective of a hate-mongering mindset and misinterpretations standing in the way of our heroes’ seeming victory — appear downright frustrating. Here are some of the reasons why Jason Carver is the absolute worst.

Lucas’ transformation into a social climber in the established hierarchy of the school is an example of normal high school melodrama. Carver stepping up as the leader of the school’s basketball team reinforces the stereotype of a well-liked physically fit athlete. That sentiment was heightened following his speech honoring Billy Hargrove and Barbara Holland.

The speech solidified his position as a leader and was a great way to put him beyond reproach.

Carver’s relationship with Chrissy Cunningham and her eventual death forms an essential storyline in the series as his actions resulting from the incident were driven less by his attempts to acquire a grip on the cause of the murder and more by a twisted sense of responsibility which in the given case, was avenging his girlfriend’s death.

Carver occupied a major proportion of his screen time in assembling his team to search for Eddie Munsen — Chrissy’s alleged killer — who earned the status primarily on the grounds of being near her when the crime took place.

Carver’s actions mostly consisted of gathering his buddies and continuing searching for Eddie with the key objective of hunting him down. This was followed by a violent fight between him and Lucas in the end. Carver’s actions are inspired by the aggression that led him to move on with his plan to locate the Hellfire members as well as justifying physical assaults as an effective solution to crises.

The manifestation of this behaviour accurately augments the jock stereotypes that are not uncommon in the mainstream pop culture leading to the creation of rigid archetypes around the same. However, Jason’s eventual demise upends the glorification of such behavior.

Chrissy’s death successfully transformed the otherwise benign hostility between Jason and Eddie into full-fledged, one-sided hatred. In his attempts to search for Eddie, Jason carved out his own theory about the origin of the powerful forces that had engulfed the disturbed town of Hawkins and it is not even remotely close to Vecna’s future plans for Hawkins.

Carver’s speech at the Town Hall about his version of the truth was a clear manipulation to shape public opinion to suit his own agenda. He placed the blame for the murders of Hawkins’ residents on the Hellfire Club, and painted a picture of Eddie as an evil Satanist/cult leader. As a result, the entire town began to hate Eddie and the Hellfire Club which made his death even more painful to watch.

Following his death, there was barely a soul (except Dustin) who even remotely empathized with his sacrifices. It is absolutely possible that the popular perception — which is devoid of any knowledge about the actual happenings — still aligns with the image that was created by Jason.

While Eddie was more self-sacrificing, loyal, and brave, Jason was leaning toward arrogance, delusions, and bigotry. Here, Eddie’s self-sacrificing nature is evidenced by his ultimate goal to safeguard the well-being of the residents that hated him until the very end. Jason’s approach toward the incidents, on the other hand, is deeply rooted in ideologies that are made-up and fantastical against the looming horrors.

There was no concrete proof of his theories as they were exclusively driven by his deep-rooted assumptions about the issues. His friend Patrick’s death proving Eddie’s innocence — severing his direct association with the crime — was rebuffed by him in the face of his version of the truth. Yes, at times even Vecna’s cruelties fell short in front of the abject horrors of delusions and arrogance that were epitomized by Carver.

Jason’s savior complex was stretched a little too far when he unknowingly sabotaged Max’s plans to attract Vecna’s attention. While Max was trapped in another Vecna-induced trance, Jason barged in and started a bloody duel with Lucas who made repeated attempts to convince him of Vecna and his plans, but all in vain.

This certainly came at a cost when Max’s temporary death — confirmed by bones cracking and blood oozing down her eyes —opened the portal with fire and smoke entering through the cracks into Hawkins.

Amusingly the fissure dismembered Carver along with a heavy loss of properties in the town. While El saved Max at the end (whose fate is still uncertain), Jason Carver’s brutal demise evoked laughter and caused a string of vitriolic tweets from fans, proving there was no love lost for the bully.

The way Jason’s death was so anticlimactic has me cackling because deserved #StrangerThings pic.twitter.com/T2B7EqS2z6

Labeling a gruesome death as “anticlimactic” and “deserved” in the same sentence really illustrates an intense sadistic pleasure.

Whereas others balanced it out with the painful shock of Max’s fate.

me trying to process max’s death and then immediately watching jason get sliced in half like a grilled cheese pic.twitter.com/a1d8CKfqp5

Well, satisfaction over his death proves he had no redeeming qualities, arguably making him the worst character in the series.