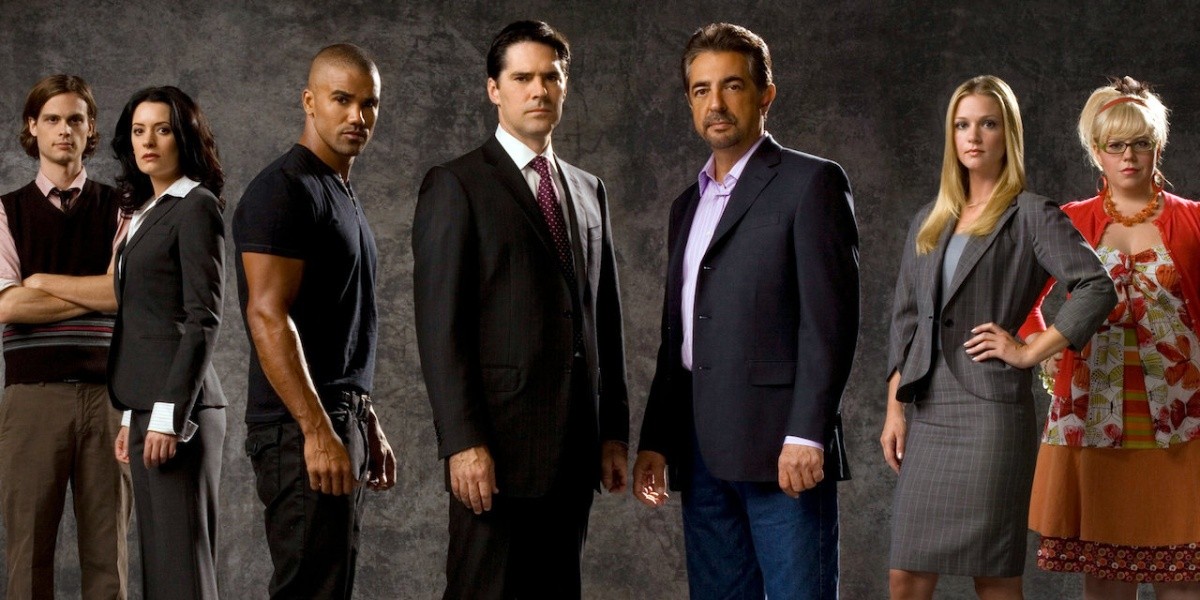 It seems paradoxical, but many people enjoy unwinding with a good true crime documentary or murder show. Something about solving a crime or trying to understand the dark side of humanity is just so relaxing. The CBS television show Criminal Minds was a forerunner in this crime-as-entertainment craze. This one-hour procedural drama ran for 15 seasons from 2005 to 2020. It followed members of the Behavioral Analysis Unit of the FBI as they worked to profile a criminal in order to help investigate with the goal of catching the unknown subject or “unsub”. The show’s original cast of characters included Jason Gideon played by Mandy Patinkin, Aaron Hotchner played by Thomas Gibson, Elle Greenaway played by  Lola Glaudini, Derek Morgan played by Shemar Moore, Spencer Reid played by Matthew Gray Gubler, Jennifer Jareau played by A. J. Cook, and Penelope Garcia played by Kirsten Vangsness. As is the case with many long running shows, the cast changed over the course of the multiple seasons. Additional cast members to join the FBI included Emily Prentiss played by Paget Brewster, David Rossi played by Joe Mantegna, and Ashley Seaver played by Rachel Nichols.

With so many episodes to choose from, it can be overwhelming to plan your relaxing murder binge but never fear. The ten episodes on this list can help you mellow out whether you are a new or repeat Criminal Minds viewer. So sit back, relax, and have a killer time.

Reid and Gideon are in Los Angeles to run a seminar on profiling for the LAPD. While there, they are brought onto a case revolving around an up and coming actress Lila Archer and her stalker. This episode succeeds in showing viewers the dark side of Hollywood and fame. There are several parallels and references to the Charles Manson murders. The relationship that develops between Archer and Reid is also a nice addition to this episode’s plot.

Season three ended with a cliffhanger where one of the team’s SUVs was blown up by a terrorist unsub organization. Viewers are left to wonder which team member was in the vehicle. Thankfully in the age of streaming, viewers do not have to wait to find out. This season four opener also reveals to viewers that the terrorists target first responders which makes things all the more complicated. This episode shows Hotch, who is normally calm under any circumstance, come unglued and unmoored as he struggles to not only solve the case but also keep his team alive.

Reid works to solve a case in Las Vegas, Nevada while also uncovering facts about his own past. It follows up on the information the audience learned in the episode entitled The Instincts. Audiences learn more about Reid’s estranged father, William, played by Taylor Nichols through a series of nightmare flashbacks. Jane Lynch reprises her role as Diana Reid. This episode shows the strong familial bond the team members have. Sometimes family is the people you choose to love instead of the family you were born into. The sweet gesture of JJ naming her baby after Reid further proves this.

Imagine what would happen if Luke Skywalker turned to the dark side like his father Darth Vader. This is essentially what happens throughout season eight, kind of. Mark Hamill plays John Curtis, who goes by the nickname “The Replicator” because he copies crimes of previous unsubs in an effort to taunt the team. This season finale shows the conclusion of Curtis’ storyline when he starts targeting a member of the team. This is also the unexpected final episode for Erin Strauss, played by Jayne Atkinson, who is poisoned by Curtis before he meets his explosive end.

This episode is about all things Penelope Garcia. When beloved team member Garcia goes on a date with a man she meets in a coffee shop, it ends in him shooting her. The team work tirelessly to help find out who this pistol-wielding Prince-not-so-Charming could be. While Morgan and Garcia have always had a flirtatious friendship, the two do not end up together, but audiences do get to meet the new character of Kevin Lynch, played by Nicholas Brendon. Unlike Morgan, Lynch and Garcia do get together. Lynch becomes a recurring character for a time.

The conclusion of a two-part episode, Revelations deals with the thin line between good and evil. The episode centers around the serial killer Tobias Hankel, played by James Van Der Beek. Hankel was both a victim and a killer. Hankel’s abusive father used a misinterpreted biblical view to justify violently disciplining him, branding his forehead with a cross and almost drowning him in an attempt to baptize him. He also forced Hankel to kill him citing the fifth Ten Commandment, “Honor thy father,” once he became ill. The stress from this trauma caused Hankel’s mind to compartmentalize by fracturing into three different personalities, one of which ended up being a killer.

This two-part episode follows Randall Garner, a man who believed himself to be the Fisher King. Garner was institutionalized after surviving a horrific fire which killed most of his family. He just so happens to be in the same institution as Reid’s mother who told him all about her FBI son and his work on the BAU. This episode helps firmly cement that although this show is a procedural drama, it has excellent characterization.

In a bizarre third wheel type of date, Reid solves a case centering around his old flirtatious nemesis, the unsub Cat Adams, played by Aubrey Plaza. When a father and daughter go missing, the unsub in that case, Juliette Weaver, demands Adams’ release. Turns out she was Adam’s cellmate. Adams has found out that Reid is dating a new woman named Max and is not happy about it. But with Adams, there is always more than meets the eye.

Most of the unsubs on Criminal Minds tend to be male because most serial killers are male. One of the things that sets this episode apart is the female unsub Megan Kane, played by Brianna Brown. Kane is a high-end call girl who targets rich divorced men who do not pay their alimony. She is an antihero Robin Hood of sorts, who kills the rich to help the poor women they left behind. For a killer, she is intriguing and almost sympathetic.

This episode centers around the character Nathan Harris, played brilliantly by Anton Yelchin. Harris is suspected of being the unsub but is not. He is actually a young man who struggles with dark desires such as murder. This episode poses difficult questions for society such as what makes someone evil? How to treat someone with a mental illness? Do evil thoughts mean a person is an accident waiting to happen? Can society treat and rehabilitate people such as Harris? Harris does not appear in another episode fulfilling his dark desires, so it appears as though there is some hope.

In case you breeze through these episodes and more, never fear Criminal Minds’ impressive 15-season run might not be completely over. Even though the CBS version of the show just ended in 2020, Paramount+ already has plans for a reboot. Perhaps this list will soon need an update.