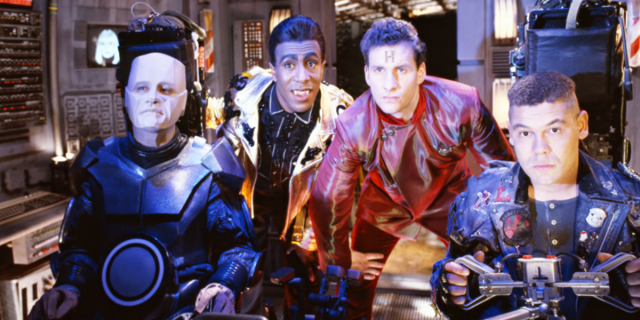 Since it first aired in 1988, the cult British sitcom Red Dwarf has developed a dedicated fanbase. The show follows the adventures of vending machine repairman Dave Lister (Craig Charles), the only survivor of a radiation leak that wiped out the crew of his ship. Lister is now the last known human, stranded three million years into deep space with only a holographic recreation of his former supervisor Arnold Rimmer (Chris Barrie) for company, along with a creature who evolved from the ship’s cat (Danny John-Jules) and Holly, Red Dwarf‘s possibly-senile computer (played by Norman Lovett and later Hattie Hayridge).

After a hiatus of over a decade, Red Dwarf unexpectedly returned to screens with three new seasons starting from 2012. Among the best of these new episodes is “Lemons”, in which the Dwarfers are stranded in the year 23 AD after a mishap with a self-assembled shower sends them back through time. Their quest to find lemons to make a battery for their remote control leads them to India, and a surprise meeting with Jesus Christ.

“Legion” is a superb example of Red Dwarf’s ability to blend eerie science fiction with character comedy. The crew find themselves on a station inhabited by a lone individual, Legion. Despite Legion’s strange appearance and mannerisms, his technology and scientific knowledge far surpass the meagre skills of the Dwarfers, and they agree to try and recruit him. The problems begin when Legion tells them that none of them will be allowed to leave, and that they must remain with him until the day they die.

Red Dwarf’s fifth season leaned strongly towards a darker tone with more horror-based plots, though it did so without ever compromising on the comedy the show is known for. “The Inquisitor” may be the crowning glory of this approach – a story in which the crew encounter a terrifying enemy with the ability to remove them from time entirely. Deemed unworthy of life and consigned to non-existence, Lister and Kryten must find a way to restore the timeline, all while being stalked by the Inquisitor aboard a version of Red Dwarf in which neither of them ever existed. “The Inquisitor” combines a strong dark sci-fi story with Red Dwarf’s classic character-driven comedy, and the result is an unforgettable episode.

Red Dwarf’s fourth season ramped up the high concept science fiction side of the show, placing the crew in a new Star Trek-worthy situation every week. One of the best is “White Hole”, in which the ship encounters the titular phenomenon, a white hole. Where a black hole sucks matter out of the universe, a white hole spews matter into it. The crew must seal the hole before it destroys them, but with time no longer running linearly aboard the ship, it’s impossible for them to even carry out a normal conversation. “White Hole” is one of the most joke-heavy episodes of the show, from the return of Talkie Toaster (a cheap AI toaster with a single-minded obsession for bread products) to Lister’s unorthodox, drunken approach to astrophysics.

Red Dwarf was always at its best when it focused on the complicated relationship between Lister and Rimmer. Though the focus on that aspect of the show sadly faded in later seasons as the science fiction came to the front, season three’s “Marooned” provides one of the most in-depth and hilarious examinations of the two characters to date. Stranded together on a desolate ice moon after their ship crashes, Lister and Rimmer work together to survive. What follows is an episode that consists almost entirely of dialogue, and a slowly-increasing mutual respect between the two characters… which Lister ultimately undermines in one of the most excruciatingly hilarious endings to any episode of the show. Chris Barrie has named this episode as one of his favorites of the entire show.

A strong case can be made that the second season of Red Dwarf is its all-time best. With more interesting science fiction concepts than the first season, but more intimate character comedy and focus on Lister and Rimmer than subsequent seasons, almost every episode is a winner. “Better Than Life” gives us a classic science fiction story about a virtual reality game that fulfils player’s wishes, but ultimately offers us a character study of Rimmer – a man who is so used to failure and whose outlook on life is so toxic that his brain simply can’t accept anything positive happening to him. His self-loathing eventually causes the game to glitch so severely that even Lister and Cat are dragged into his nightmarish scenarios.

Another from Red Dwarf’s darker fifth season, “Back to Reality” is yet another movie-worthy sci-fi plot tinged with the show’s trademark comedy. After a narrow escape from an undersea derelict ship, the crew apparently die in a crash – only to find themselves awakening on a dystopian version of Earth. They have been playing a videogame named “Red Dwarf” for the past several years (and, in that time, scored 4 out of a possible 100). With no memory of who they are, the crew must re-learn their identities, and are horrified by what they find. Just as the episode reaches its darkest and most tense moments, one of the greatest comedy reveals in history takes place. “Back to Reality” frequently tops polls for the best episode of the show, and was named “The Best-Ever Red Dwarf” by the BBC after a viewers’ vote.

A shape-shifting mutant who feeds on emotions makes its way aboard the ship. It can disguise itself as anything, from a “six-foot tall armor-plated alien killing machine” to Lister’s underpants. The hunt is on to destroy the creature before it destroys the crew, but with each of the gang having one of their emotions drained by the mutant (turning Lister into a crazed killer and Rimmer into a pacifist), it won’t be easy. “Polymorph” is a fairly lightweight episode in terms of plot, with no real backstory for the Polymorph itself, but it remains a fan-favorite simply for the amount of quality jokes it offers all the way through.

Holly is replaced by the highly advanced supercomputer Queeg 500 (Charles Augins). Rimmer is initially glad to be rid of Holly, but when Queeg turns out to be a relentless authoritarian who rules the ship with an iron fist, the crew team up to stop him and return Holly. “Queeg” is not only one of the funniest episodes of the show, but also contains some of the best character work, and has a twist ending that may be one of the most hilarious moments in all of Red Dwarf. Norman Lovett has described this episode as one of his favourites.

After Rimmer drunkenly confesses that he’s never been in love (during his “death-day” party), Lister decides to transfer his own memories of love into Rimmer’s memory banks, without the latter’s knowledge. Lister’s shoddy work in editing the memories quickly starts to wreak havok on Rimmer’s mind, as he’s tormented by the failure of a relationship he never even had. When the truth comes out, Lister and Rimmer share one of the most heartfelt moments in the whole show. The story is tragic and hilarious in equal measure, and shows what Red Dwarf can be at its absolute best.