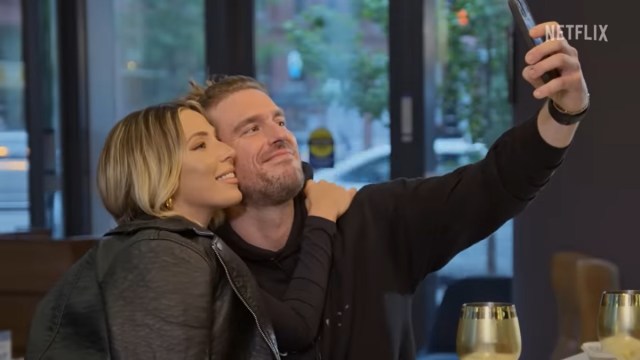 We have all been on the edge of our seats waiting for the Love Is Blind: After the Altar special to drop. What secrets will finally be revealed, what bombs dropped, and what tea spilled? The wait is finally over and we now have in our possession the seven most shocking bombshells dropped on the After the Altar episode, and we want to share them with you. Seek shelter, Love Is Blind fans, because there were bombs being dropped all over this one.

Shayne Jansen revealed to Shaina that he and Natalie Lee’s post-show relationship has been a roller coaster. He said that he and Natalie have been everything from broken up to boyfriend/girlfriend to re-engaged and back to unengaged. Yikes. This should come as no surprise to Shaina as, according to Natalie, she was the one who caused it.

Natalie alleges that she had found messages, many sexual in nature, being exchanged between Shayne and Shaina via Instagram, even after Shaina started dating her new beau. Natalie said the messages were sexual, flirtatious, and even went so far as to talk about what the two’s sex life would have been like if they had gotten together. Gross.

Once Natalie found the messages, she called things off. Meanwhile Shayne says the door for he and Natalie to be together will always be open for him, though she does not agree. Natalie revealed she had closed the door to a future with Shayne and that she did not feel love for him anymore. She elaborated that she no longer trusted Shayne and that without that trust there could be no relationship. With these two, who knows?

Shake was not part of the event

It wasn’t exactly a secret that Shake Chatterjee was not the most loved cast member, whether by fans or fellow cast members. The Reunion special featured a very angry cast, basically cutting Shake off from speaking at every turn. Not only was Shake not included in the After the Altar special, but he was also purposely excluded. As Danielle Ruhl talks about combining the celebration with Natalie’s 30’th birthday, she and Nick Thompson agree that if Shake tries to show up, he will be barred from entering. The two even joke about getting bodyguards specifically to keep him out.

Shake was not a fan favorite as his obsession with outward appearance and his derogatory comments about his then-fiance, Deepti, and women in generals’ bodies, did not exactly win him any friends. In the pods, Shake would ask women what they looked like and would ask sideways questions to try to get at their weight, things like, “Would I be able to carry you on my shoulders?” or “Do you work out?” Yuck.

Shake also told people that kissing Deepti was like kissing his aunt and that he was not physically attracted to her at all. It was rough. The fallout of the comments lasted long after the show ended. Fans and fellow cast members tore Shake apart on social media and during the Reunion special. Regardless, it was still very surprising that he was omitted and actually barred from attending the After The Altar events. Whether it was a production choice or the cast members’ decision is unclear but either way, Shake was a persona non grata at the festivities.

Neither Deepti Vempati nor Kyle Abrams got what they wanted from their time on the show. But could these two have a second chance at love–with each other? During the special, we discover these two have gotten very close post-production.

Deepti called her and Kyle’s relationship currently a “situation-ship,” but they both admitted to having deeper feelings for each other. Kyle admitted to being “deeply attracted” to Deepti. He revealed that the two pretty much act like they are dating, but there is no sexual relationship. Both appeared fearful of taking the next step, worried that they would ruin the friendship they had worked so hard to build. Still, the two coordinate outfits, talk on the phone daily, and even grocery shop together. Deepti admitted that Kyle made her feel both “giddy” and also “hot and bothered.” Ooh, la la! The two aren’t dating other people, and they spend almost every day together, so we have to ask, what’s the hold up, you two?

Iyanna McNeely revealed that although she and Jarrette Jones were still together, she had moved out of the apartment. She explained that Jarrette’s s going out and party boy ways were more than she could take. She revealed that he had grown up in a very strict household and now that he was free, it felt like he was going wild. Iyanna felt that his bartending and security job at a club were really encouraging him to drink and party far more than what was good for him or the relationship. Although Jarrette does admit his drinking and going out is becoming a problem, he didn’t seem to take any real steps to fix it.

Iyanna told Natalie that she was having a hard time seeing Jarrette as a husband at that point and that she had told him she would not be moving back in for her own mental health. She said it was really difficult to have to sit and wait for hours for him to come home and that it was easier for her to just simply not be there. Jarrette and Iyanna discussed the problem a lot and threw out a few possible solutions. Even at this point, we could see the writing on the wall.

Shaina wasn’t the only cast member with a new love interest introduced in the special. Sal Perez brought his new lady friend. Jessie Palkovic, to the event, and she was a lot. Between the opera singing, the yelling, and the comparing her and Sal to Sonny and Cher, Sal’s ex, Mallory, wasn’t the only one getting annoyed with the newest guest member of the “pod squad.” After Jessie awkwardly approached Mallory to say that she wasn’t there to upset anyone, Sal said that he couldn’t believe that Mallory still had “her walls up.” Sal, we might have some ideas as to why that is. He continued to say that after all of this, he was “1,000 percent sure” that he made the right choice at the altar. Ouch. Sal also admitted to his sisters that he was ready to propose to his new love interest, so are wedding bells in the near future for this “Sonny and Cher” wannabe duo? Time will tell.

Shaina Hurley had a real roller coaster of a time on her Love Is Blind journey. From getting rejected to becoming the one doing the rejecting, Shaina certainly had her ups and downs on the show. Despite her alleged illicit communications with Shayne post-production, according to Shaina, she’s never been happier. She introduced the new man in her life, Christos Lardakis, aka “Chris,” and revealed the two were engaged. We had heard rumblings that the pair had tied the knot, but now we get the backstory of how the couple met and got engaged. We also got some scandalous info provided by Natalie, claiming that the conversations between Shaina and Shayne had overlapped with Shaina’s new relationship. Is Shaina really as blissful as she lets on, or is this all just a ploy to prove she can live without Shayne, thereby making him jealous and winning him back? With Shaina’s seemingly never-ending plots and schemes, there’s just no telling!

Mallory has a secret

While Mallory Zapata seemed to have some reservations about Sal Perez, it was very surprising when, on their wedding day, he was the one who called it off. It did seem a little out of the blue after all his ukulele serenading and confessions of feelings towards Mallory. During the After the Altar special, Sal revealed an event that didn’t get caught on camera but apparently really swayed both his decision and his opinion around Mallory. He dropped the bomb that, prior to the wedding, Mallory had disappeared. According to Sal, the two were supposed to meet up to go shopping, but Mallory never showed. When he was finally able to get her on the phone, he claimed her speech was slurred, and she was obviously drunk. When he arrived back home, he saw Mallory intoxicated and in the car with a “random man.” Sal said that he had kept the incident a secret in order to protect Mallory, but he was no longer interested in doing that. Apparently, he is dropping all the pretense and now all the bombs.

Mallory denied the allegations, saying she never disappeared or blew Sal off, and that the “random man” was a friend of hers. In this case of “he said-she said,” it’s hard to be sure who is telling the truth and who is simply covering their tracks.

Love Is Blind season two had all the drama, intrigue, betrayal, and, yes, love that we have come to expect from the series. We have no doubt that the impending third season will be no exception to this legacy of love to watch and love to hate that makes Love is Blind and its couples so addicting.