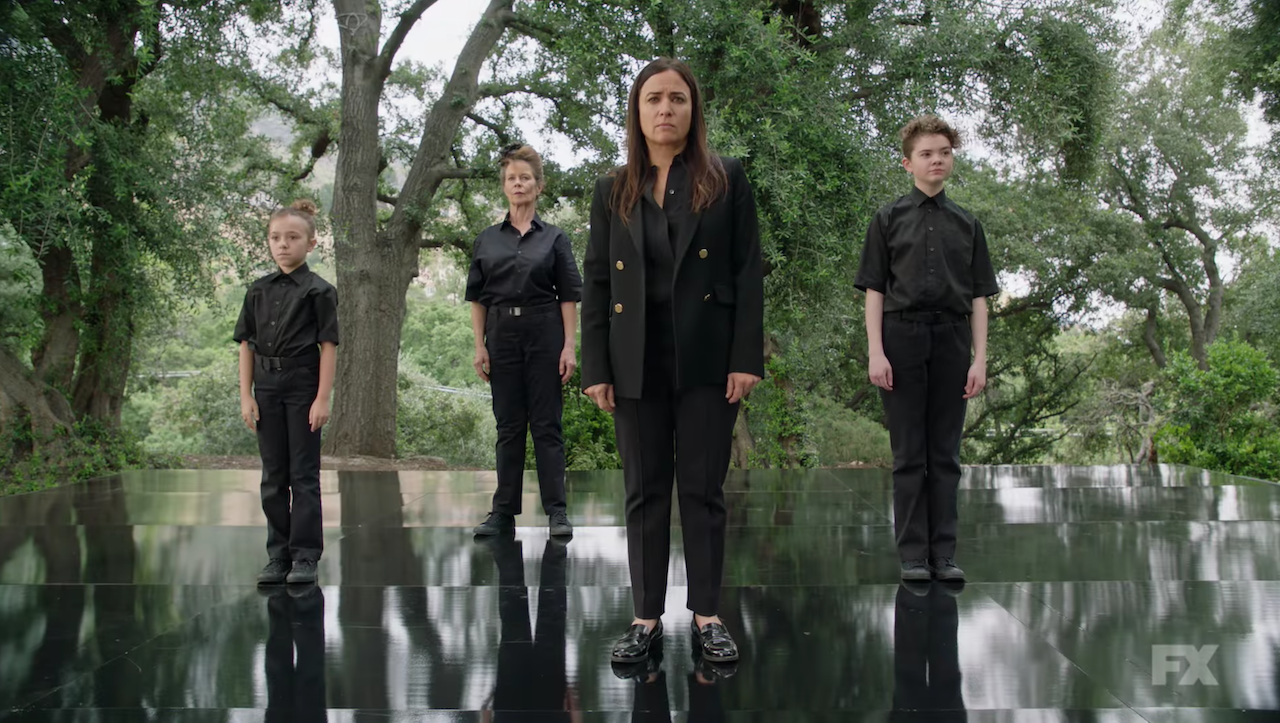 As season five of Better Things premieres, it’s the perfect time to reflect on a show about rituals (touching the statue at the top of the stairs, toi toi toi), fights, laughter, tears, curse words, a bitchin’ and eclectic soundtrack the likes of which FX has never previously seen, and a LOT of food.

In the female-centric show, seemingly mundane scenarios inadvertently lead to unforgettable moments. Then again, maybe that’s just life. Oof! No matter what the circumstances are, we’re taking a reflective glance back and bringing you what we believe are the very best episodes of Better Things, which you would do well to start watching immediately.

This episode opens with Sam’s pregnant gynecologist telling an incredulous Sam that she has “the reproductive system of a 16-year-old.” The tension at home is beginning to boil over because the girl’s dad has been talking to Max, convincing her that Sam is withholding money from him and he is struggling financially.

Sam is invited to Frankie’s school to talk about women and girls’ empowerment. She gets up for the speech seemingly unprepared, then senses that no one is really paying attention, instead looking at their phones. Frankie is horrified when the topic turns to periods. By asking everyone in the group to identify what stage of womanhood they’re in, she opens up a dialogue with the audience. The Judy Blume-redolent moment is part of what makes this episode memorable in that it codifies the sisterhood of the group, and Frankie is proud of her mom.

Max is in crisis. She does the above speech during an impromptu grownup party at their house after listening to all of the adults talk about regrets, expressing her own 16-year-old ones. She had a meeting with her counselor that day and is realizing that it’s too late to “start trying.”

Sam takes her to a department store. Max is clueless as Sam picks out a business suit for her to try on. When Max comes out of the fitting room, Sam has her look in the mirror and explains how none of us ever really has it figured out ⏤ you just show up and look right, and people buy it. What we love about this episode is watching the ease with which Sam disarms the surly teenager, which is truly something to behold.

When Sam goes to pick up Duke from chorus, judgmental Trinity (Morgan’s mom) springs it on Sam that Morgan is to go home with them for the afternoon. When Trinity arrives to pick Morgan up, she invites Sam and the girls to go to their Mormon church with them on Sunday. They go, and Trinity has a heart-to-heart with Sam, revealing that she and her husband are both having affairs. She wants a divorce but it’s not allowed in the church. Sam is not religious and does not approve of the Mormon faith, but she makes up the difference with sheer compassion and a little bit of sass and we’re here for it.

Max is dating a 35-year-old, Arturo, aka Macy’s boyfriend. Sam is having a party and Duke plays truth or dare in her room with her friends. Frankie sings while her friend plays piano, then Arturo sings a capella. The guests are dazzled. His brother is heavy-duty flirting with Sam.

We love watching Sam and the girls and their bohemian lifestyle, since Sam is so tight with all of her associates and even just acquaintances. Max explains to Sam that she feels in over her head and asks Sam to get rid of Arturo. Sam ousts the cake-eater and his brother, a satisfying end to the evening for her, and for us.

Sam and her boyfriend of three weeks break up in front of an audience in the parking lot at Musso & Frank. The consensus is that she is mean and he sucks. Sunny flies all of the girls to her boyfriend’s fancy villa on his private jet. Sam inexplicably bolts and gets a motel room and then, on second thought, rents a hot rod and goes and picks up the girls and takes them back with her to her beach escape. A girls’ weekend, in theory, and in practice. Perhaps what makes this episode so satisfying is the circumstantial realism. Sam would rather be with her daughters than her “girls,” and we admire her for that.

Phil is fired from her job as a docent for trying to steal from the Usurpa collection. After she deliberately steps into an open manhole, she’s hospitalized with broken bones. Sam has to call her brother Marion to discuss putting Phil in a home. Tressa tells her the story of how she took care of her dad in his elderly years. The whole time he was mad at her and not speaking to her. When he got dementia, he started being nice to her, and then he died.

After the girls finally get to meet Robin, her obsequious new boyfriend, Sam goes to see “nobody,” the Mr. Big of this series. The hodgepodge quality of this episode is like one of Sam’s impromptu dinner get-togethers: some friends, some family, an argument, and funny, by fits and starts.

After a humiliating experience with the girls, Sam wants to stage a pretend funeral to have everyone eulogize her. Duke could not bear the idea of losing her mother, so she is dead, too. The result is incredibly heartfelt, with everyone taking the project seriously. This is the way to find out how people really feel about you, especially if said people are rebellious teenagers who would not dream of giving you praise in life. One notable thing about this episode is Max’s contribution to the eulogy. Surprisingly, it’s not begrudging, but rather a simple, loving tribute.

Any episode where Sam makes a speech makes our list. The girls’ grandfather is in town and confronts Sam about her alimony support ending. He thinks she should keep paying for his son Xander because he is a “man of leisure.” Frankie and Sam go to the bar mitzvah of family friend, Push. There we have the odious scene where Frankie quietly declares that Sam is washed up and proceeds to say the most horrible, hateful things about her age, her career, and her bald spot. We admire Sam’s patience in the face of the constant vitriol she endures from Frankie. She tells Sam to go work at McDonald’s, then Sam is asked to make a speech, which she kills. We enjoy watching the match of tit-for-tat that follows, which culminates in Frankie locking Sam out of the house. Patience is a virtue.

Sam takes the girls to visit Jarita and Lester, their great aunt and uncle who live on the beach in Canada. Duke spots a woman in white. There’s a wives’ tale that a woman took her life there on the shore, known as “Sad Lady Beach.” Sam learns that she had an aunt she never knew about, Marion, who was institutionalized at 17 years old. After some investigation, she learns that Aunt Marion died in 1983.

What makes this episode special is the ethereal aspect. This is the first time that we see Duke’s intuitive abilities, an ongoing narrative throughout this series. If a life falls softly in the forest but there’s no one around to hear it, will it make a sound?

Sam and her therapist move things to the next level, much to his delight. Duke says that Grandpa Murray is in her room. Sam goes into the attic to find items to show to Duke, to soothe her regarding Grandpa’s visits, and finds several books he wrote, a gadget called the word ball (to aid in his writing), and cassette tapes of her and her dad talking. Duke sneakily obtains Murray’s ashes, puts them in a sandwich, and eats it. (Yes, you read that right.) Chef’s kiss.

Frankie has a spoken word event. Her troupe’s performance ⏤ “The Little Lies We Tell Our Little Ones” ⏤ contains affirmations, each accompanied by a sting of one form or another. Their kindness could kill you, or at least hospitalize you. It brings down the house. Frankie is hostile to Sam’s praises and leaves without her. The actions of Steinbeck’s Cathy Ames would be a mild reaction to Frankie’s behavior at this point, but Sam chooses to give her her space and we wait in anticipation as she provides fodder for the gods.

It’s Sam’s 50th birthday and Duke and Max make a cake and sing “Happy Birthday.” Frankie has been MIA for eight days and it’s unclear what she’s upset about, but friends and sisters keep Sam updated. She is nasty and dismissive when Sam shows up at her tutoring session. Sam bursts into Max’s room, where she and her friends are lounging, and starts an impromptu performance of the Phineas and Ferb theme song. All of the girls join in, delighted to be reminded of this relic from their childhood.

Frankie has her recital, they perform Florence and the Machine’s “Shake it Out.” It’s a chorus, but she has two solos. Later, Frankie comes home but insists she’s not staying. This episode is memorable because it’s a victory for Sam, and we celebrate along with her. Quotidian life resumes, albeit unconventional, and we’re reminded that the worst possible thing we can do to our moms is to refuse to acknowledge that we need them.

Sam is picking up Frankie and Duke from the airport. They’ve been visiting their dad, and through a flashback, we see that Phil has had a cardiac incident and has to wear a personal defibrillator. Frankie announces that she wants a big party, a quinceanera, for her birthday. She wants Sam to invite Xander. Rich and his boyfriend break up. What we love the most about this episode is when Duke, ever the wise old mensch, gives recently-heartbroken Rich the you-will-find-love-again speech that brings him and Sam to tears. Out of the mouths of babes.

We see women being interviewed about having their periods with their faces in darkness like they’re in the Witness Protection Program. We then see the same women telling stories of being invisible to men. It’s revealed that what we’ve been watching is a film that Sam directed and shot herself. Sam, Duke, and Duke’s friend go to a Dodgers game, and leaving the game is as much of an adventure as watching it was.

The daughters all go to the beach. Xander arrives at the house for a visit. Phil points out the irony of showing up for dinner and the girls inexplicably aren’t even there. Sam gives Xander his final payment as he leaves, and formally forgives him. Watching what we thought was the end of this beloved series, this became our new favorite episode, albeit a bittersweet one. Once more, for all the marbles, the girls frolic on the beach together while Sam, Rich, and Phil (naked) swim in the neighbors’ pool. Sam’s check is rejected by Xander’s bank. All the while, R.E.M. plays.

What can we learn from this show? It’s simple: engagement is paramount. Every single person you meet, every single experience you have, has value, because it presents an opportunity for growth. Don’t let the better things in life pass you by.