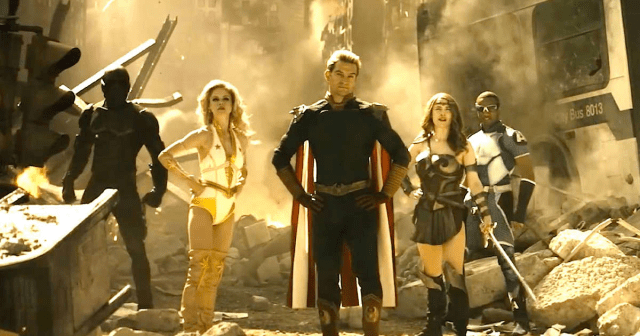 Kripke said when they shot the scenes they wanted to make sure there was always something happening in the background.

There also wasn’t anything major that gave the writers pause in terms of feeling like they couldn’t film it, or anything that had to be removed. “I’m sure some small things did, but nothing really major,” Kripke explained.

The scene ultimately allowed for the characters to clash in new and exciting ways, especially that huge fight that most fans have been waiting for since the start of the series. The idea was to put something extremely outrageous as a premise, but still use the opportunity to further the storyline and continue to push the characters in new directions.

Like everything on this show, there’s madness on the front of the cereal boxes, it’s outrageousness, but there’s a lot of fiber in that cereal. I think Herogasm works because it’s a big enough event that it smashes together a lot of different characters with a lot of different conflicts, and it all comes to a head at Herogasm, excuse the terrible pun. It’s that depth, and it’s those emotional betrayals and those confrontations that give it weight and heft that you feel like, ‘Oh, this is a big event,’ because of what the characters are doing. Not because there’s a bunch of naked supes everywhere.

The Boys season 3 is currently streaming on Amazon Prime Video.