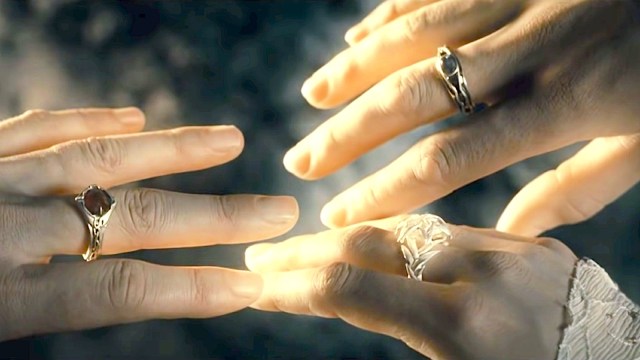 In Tolkien’s Lord of the Rings, there is the One Ring of Power, forged by the Dark Lord Sauron, but it was not the only ring of power. There were 20 rings of power created during the Second Age of Middle Earth, as it was Sauron’s intent to manipulate and wield control through these rings, seducing the wearers to evil. The poem written by Tolkien about the rings goes like this,

—J.R.R. Tolkien’s epigraph to The Lord of the Rings

The forging of the rings is explained to a degree in the opening of the Lord of the Rings: The Fellowship of the Ring within the extended edition.

However, this didn’t quite work out as Sauron had wished, especially in the case of the elves and their three rings.

The Creation of the Rings of Power

At the time of their creation, Sauron was fair enough to disguise himself as the kindly Annatar, in order to hide his true intentions from the world. He taught the elf-smiths, led by Celembrimbor, how to craft the rings, and in doing so was able to imbue them with his own malice and control. Of the 19 rings made, the greatest three were made solely by Celembrimbor and Sauron had no hand in their forging. He then went away and forged his own ring, the One Ring, in the fires of Mount Doom.

Originally, all the rings were intended for the elves, but when Sauron put on the One Ring the elves felt his presence and removed them which infuriated the Dark Lord. He led a war against the elves demanding their return but after the great three were hidden, and one passed to a dwarf, only the remaining 15 went back to Sauron. He then gave these to the mortal races, six to the dwarves (who now had seven in total), and nine to the race of men, whom Sauron believed could most easily be manipulated and turned to evil.

The first owner of Narya is not fully certain with some accounts stating it originally went to the Elf King Gil-galad before he entrusted it to Círdan, whereas other reports state the ring went directly to Círdan. He was one of the oldest and wisest of the Elves, older even than Galadriel, and had actually counseled against the making of the rings in the first place, not trusting the false benevolence of “Annatar.”

In the Third Age, after the arrival of the “Wizards” to Middle Earth, Círdan realized their true identity as Maia, servants to the Valar and powerful beings in their own rights. He passed down Narya to the one he saw doing the most good with it, handing it over to Gandalf after seeing deep into his future.

“Take now this Ring,” he said; “for thy labors and thy cares will be heavy, but in all it will support thee and defend thee from weariness. For this is the Ring of Fire, and herewith, maybe, thou shalt rekindle hearts to the valor of old in a world that grows chill”

The power of the Ring of Fire was to resist the power of tyranny and inspire in others the same. It essentially inspired hope in others allowing them to resist the temptations of evil and despair. It was also said to give the wearer resistance to the passing of time, which is perhaps why Gandalf still has his childlike sense of humor and adventure despite his many years in Middle Earth.

Gandalf openly displays the ring when he sets off to the Grey Havens. It was said to look like a gold band with a ruby embedded in it.

Nenya was the only ring to stay with its original owner, Galadriel and was said to give off the radiance of the stars. It was a white stone (many presume a diamond) set within a band of mithril (you may remember this as Frodo’s armor in Lord of the Rings). Frodo, being the bearer of the One Ring, was able to see the ring on her finger, whereas others would not have noticed it, with Samwise Gamgee telling the Lady Galadriel he only “saw a star through your fingers.”

Like Círdan she also distrusted “Annatar” causing a rift between herself and Celembrimbor which was healed once he realized he had been tricked and gave one of the rings to her. The power this ring was said to have possessed was that of preservation, protection and, some think, concealment from evil, which allowed Galadriel’s home of Lothlórien to remain strong and safe. She only used Nenya for this purpose when the One Ring was lost so she could not fall pray to Sauron’s manipulations.

She was still unable to truly protect herself from the power of the One Ring, showing Frodo a vision of what would happen if she were to take it. She refused the One Ring and decided that she would finally leave Middle Earth and return to Valinor where she was born.

Vilya, the Ring of Air, also known as the Dominant Ring, was considered the greatest even among the three great rings. This ring did make its way to High Elf King Gil-galad, though after his death in the War of the Last Alliance (a war you see played out in The Lord of the Rings films) the ring is passed on to Elrond.

The ring was a blue stone set in a gold band, and though it was considered the most powerful, its exact powers are not fully known. It is believed to wield the same protection and healing as the other rings, Elrond’s home of Rivendell was known for it’s healing capabilities, but also potentially the limited control over the elements. Though in The Fellowship of the Ring movie we see Arwen causing the flood in the book, it was actually Elrond with some help from Gandalf that caused the Nazgûl to get swept away.

Just as with the other two rings, once the Ring of Power was destroyed, the power of Vilya faded and Elrond also set his sights on the Undying Lands alongside Galadriel and Gandalf, taking all three rings of power with them as they made the voyage to Valinor.

We will see Celembrimbor and a fairer Sauron in the upcoming Lord of the Rings: The Rings of Power series, which will look at Middle Earth during the Second Age, the time when the rings of power were forged. The series premiere is on September 1.