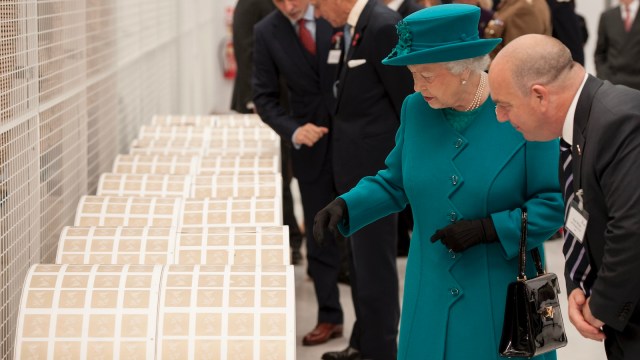 One of the many changes to occur in the wake of Queen Elizabeth‘s death and the transition of the crown to her son, King Charles III, will be the appearance of Charles’ profile on all new postage stamps in the U.K. But in what may be said to be either some rather bad timing or the greatest coincidence ever, the last run of stamps to feature the late Queen’s profile will be a set commemorating history’s most famous robots in disguise.

Yes, the last profile of England’s longest-running monarch to appear on its postage will last grace the Royal Mint’s salute to the Transformers.

The Queen’s profile will be featured on the eight commemorative stamps of the set which feature portraits of Autobots Optimus Prime, Bumblebee, and Arcee, Dinobot Grimlock, and Decepticons Megatron, Starscream, Shockwave, and Soundwave. And, there’s a bonus feature that more than meets the eye as well. According to the Royal Mint’s website, “Each stamp is printed with a hidden ink which reveals each of the character’s faction logos and names in the Cybertronian alphabet when UV light is shone on it.”

Not only do the stamps bear the image of the late Elizabeth, but they were also, as were all stamps bearing her image, personally approved by the Queen herself. In other words, the stamps are the only Transformers collectible on the earth to bear her majesty’s personal stamp of approval.

In addition to the many different Transformer collections available at the Royal Mint, two five thousand print limited editions are also available that feature Optimus Prime and Megatron respectively and feature three of the character stamps alongside a reproduction of cover art from The Transformers original 1980s Marvel Comics UK run.