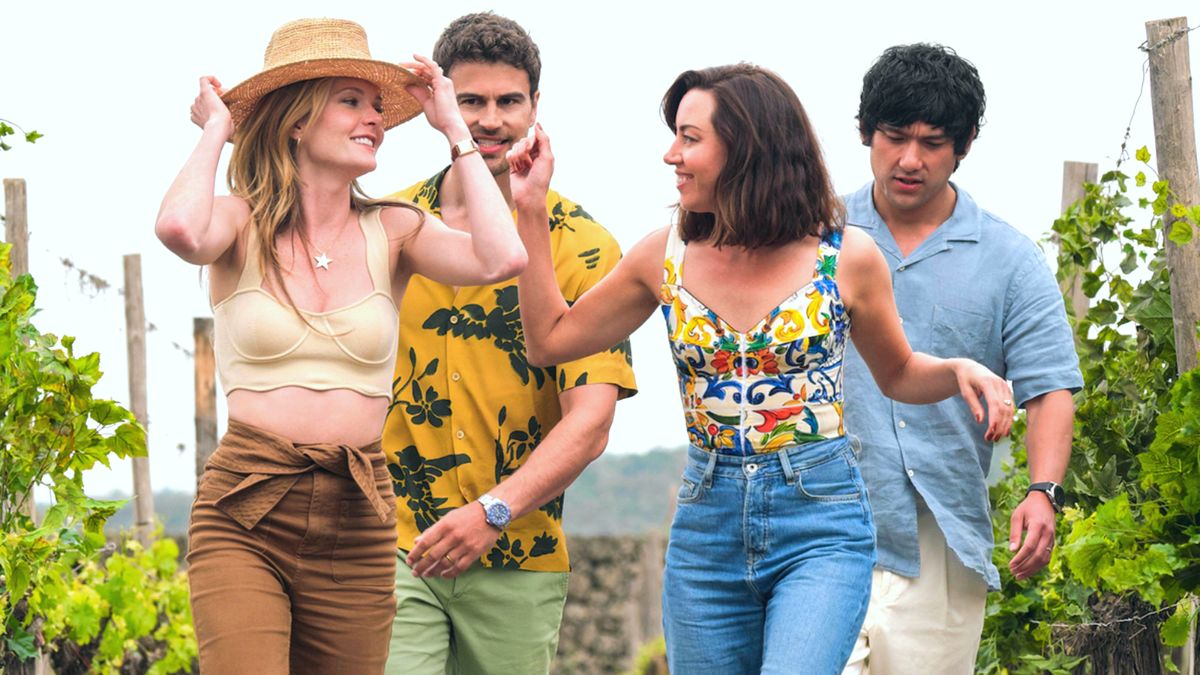 This article contains spoilers for season one and two of The White Lotus.

Mike White’s fantastically decadent HBO series The White Lotus is everyone’s new favorite show. On the surface, it might come off as another show about rich people living lavish lives like Dynasty, Gossip Girl, or Sex in The City, but its array of morally corrupt and often soulless characters, as well as its very insane comedic writing, give this show an extra punch.

Season two, especially, was filled with subtext and mythology that made its Italian setting come alive to quite literally haunt the characters staying at The White Lotus. Some fans believe that the season’s plot was laid out for all to see, if only they had been paying attention, from the start.

The title sequence, accompanied by the show’s impossibly addicting (and lowkey bop) theme song, actually provides further insight into each character, and helps the audience understand their core motivations and personality a lot better — which, in turn, might aid with putting the pieces of the puzzle together across episodes, when White purposefully chooses to omit information, or change the rules every so often. A clear example of that is the inclusion of the full mural from the title sequence in the third episode, in the wall of Harper’s bedroom in the Noto palazzo that Daphne rents for the night.

If season one’s opening credits were a combination of wallpaper patterns, with their own hidden meanings too, in season two, the White Lotus team went for the distinctive Italian Renaissance frescoes. The images play with elements of nobility and aristocracy vs. working class, sexual prowess and beauty, mythology, and the animal kingdom. As each actor’s name shows up on the screen, it is paired with a specific part of the fresco, which summarizes their respective characters and hints at their fate.

Bert comes to Sicily with his son Dominic, and grandson Albie, to reconnect with their Italian family heritage. The character is depicted as a washed-up and elderly ladies man, whose advances make every woman he flirts with incredibly uncomfortable. As the season progresses, we realize Bert had been lying to himself about his supposed great relationship with his late wife, who, of course, he had repeatedly cheated on and consequently inflicted great pain on. He was naively convinced she never suspected him.

His nymphomaniac son confronts him with this reality, which takes him on a journey of confrontation with his past, and his effect on the men in his life, as he attempts to mentor both Dominic, and Albie. He ultimately reaches the conclusion that he desperately misses the love of his wife, and the homecoming feeling she had always provided.

In F. Murray Abraham’s fresco, we see a man courting a woman as another watches on. This is symbolic of Bert’s obsession with seducing the opposite sex, despite the fact that at his core, it was always his wife that truly made him feel happy and loved.

Jennifer Coolidge’s fresco can be interpreted in a number of ways. The lady trapped in the tower is a representation of Tanya’s eternal unhappiness, caused by the neglect from her mother, and those around her who often used her for her wealth, which is represented here by the tower.

The monkey could pertain to her personal assistant Portia, who comes along with her on her trip and must be at Tanya’s beck and call, no matter how flimsy and ridiculous her requests. Or it might be Tanya’s free spirit, which she has been desperate to connect with from season one, but is forever chained to her castle of doom. The moment, in season two, when she chooses to trust Quentin and enjoy the opulent and hedonistic lifestyle he provides, ultimately results in her death.

Although it is never explicitly shown, Albie’s courtship of women seems to be a modernized and whitewashed version of his father and grandfather’s predatory tendencies. He flaunts his education, and hides his self-believed claim to the women he likes behind a kind, naive, and feminist facade.

When, at the very end of season two, we see Albie, Dominic, and Bert all ogle an attractive woman passing by, we realize that, in their own way, they’re all women-crazy. In the fresco for Adam DiMarco, much like the one for Abraham, he is seen trying to seduce a woman, but in a much less aggressive way, through music.

The two babies in Meghann Fahy’s fresco hint at the way Daphne’s family is her priority. She will look the other way when confronted with her husband Cameron’s infidelity all for the sake of upholding the traditional family structure. She’s a stay-at-home mom, sexy and mischievous enough to keep her husband interested, without ever crossing any lines.

The fascinating part of her character is that she is completely in control of her own life, and chooses to create an imaginary reality that will help her sleep at night. Appearances are everything in life, and Daphne knows this. She is not willing to let go of her status, just because her husband is a complete a-hole. Why should she be the one to pay for that?

There is also a popular theory that Daphne’s children are actually not Cameron’s, but her personal trainer’s, whom she also slept with. She describes him as blonde with blue eyes, and then when showing Harper a picture of him, “accidentally” shows her a picture of her kids instead. The oldest, too, has striking blonde hair and blue eyes, a stark difference from Cameron’s olive-tanned skin, and brown hair.

Beatrice Grannò’s Mia might seem naive and impressionable, but she is observant and waits for the perfect moment to strike. She uses her sexuality to get ahead in life, but the people she sleeps with are the ones getting played, not her. However, unlike her best friend and fellow escort Lucia, Mia isn’t just looking for money — she wants a career in music.

John Gries’ fresco is a lot less obvious. It’s unclear whether Greg is represented here by the donkey, or if he is the man riding it, with Tanya behind him. The two had a very funny Vespa ride around the island in the early episodes of season two, as Tanya tried to live the classic Italian dream. The donkey looking back could represent Greg’s deceit or it could be a stand-in for Quentin, his secret lover.

The fresco for Tom Hollander’s Quentin is pretty self-explanatory. In the image of the character, this particular part of the title sequence’s painting displays a gracious, alluring man who seems to be worshiped and followed around by the other three figures, who would represent Quentin’s group of friends. Quentin’s stand-in is also holding a grapevine which might refer to Bacchus, the God of wine, pleasure, ritual madness, and theater.

On the show, Quentin seduced Tanya into joining his circle of pleasure-seeking friends, who seemed to follow him around everywhere. He took her to the opera, invited her on his trips to luxurious places, and later to a coke-fueled rave. All the while his end goal was killing her so that his lover, Tanya’s husband, would inherit all her money.

Valentina has one of the most understated storylines of this season. As the hotel manager, she starts off as a background character, there to deal with the whims of her guests. In a trajectory that’s quite different to the manager in season one, we get to peel off Valentina’s layers gradually to reveal someone too afraid to confront her most vulnerable sides. One of which is her sexuality, which she ends up exploring with Mia.

In this fresco, the woman represents Dominic’s wife, who has left him. The way she is throwing away a necklace seemingly gifted to her by the man kneeling down is symbolic of her wanting to end their marriage, and not falling for his apologies any longer. The man symbolizes Dominic as he begs to have her forgiveness.

This mimics Michael Imperioli’s character on the show, who struggles with an addiction to sex, but actually tries to control it in order to make up with his wife, and mother of his children, in ways that can be considered a little pathetic.

Before we see the full picture of Theo James’ fresco, we are first presented with a close up of the statue’s genitals. Theo is the typical alpha male, who leads with his manhood, as he flaunts his riches, and sleeps around with other women, despite the fact he has a wife and children at home. He’s cocky, self-absorbed, and typically handsome.

The dog in the image could symbolize a number of things, such as Cameron’s animalistic tendencies to mark his territory, or it could just be there to ridicule his whole pompous persona, and bring him down a notch.

Aubrey Plaza’s Harper can be quite aggressive and and a downer. Although her character changes wildly throughout the season, in the beginning, she is cynical and suspicious of other people’s happiness, likely because her own marriage isn’t going as well as she would hope. In this fresco, she is literally dragging another bird (likely Ethan) down with her.

In The White Lotus, Portia is quite literally a lost little lamb, totally aimless and still depending on others to form her own personality. She is depressed at the beginning of the season, before finding a man whose recklessness makes her feel more alive. The woman in Haley Lu Richardson’s fresco likely symbolizes Portia’s boss Tanya, who forces Portia to follow her around as her personal assistant throughout their Sicily trip.

Will Sharpe as Ethan Spiller

The opposite of Cameron, throughout season two of the show, Ethan is the honest, humble husband, who stays loyal to his wife, despite temptation. He is led astray by Cameron more than once, and in the end we are led to believe he sleeps with Daphne as revenge, since he is convinced his wife Harper slept with Cameron too.

In this fresco, we see a submissive and serviceable man, but while we might assume that the woman represents Harper, it could also be the representation of Ethan’s fate in the show, as he finally betrays his values and sleeps with Daphne.

Lucia is a sly predator constantly in search of a new prey. The bird in her mouth is probably Albie, who she tricked into giving her €500 thousand after making him believe her pimp (who was probably her boyfriend, or a close friend) was harassing her for money.

Cheetahs are precise in the way they hunt; fast and graceful as they go for the kill. Wild cats are also often associated with seductiveness, and as The White Lotus’ resident escort, Lucia fits the bill.

Finally, Leo Woodall’s part of the fresco was telling The White Lotus viewers from the beginning that Jack was involved with men, as it portrays two men who seem to be flirting or just about to get together. Jack’s sexual involvement with his so-called uncle Quentin was one of the biggest plot twists of the season, and yet Mike White had been telling us about it all along.