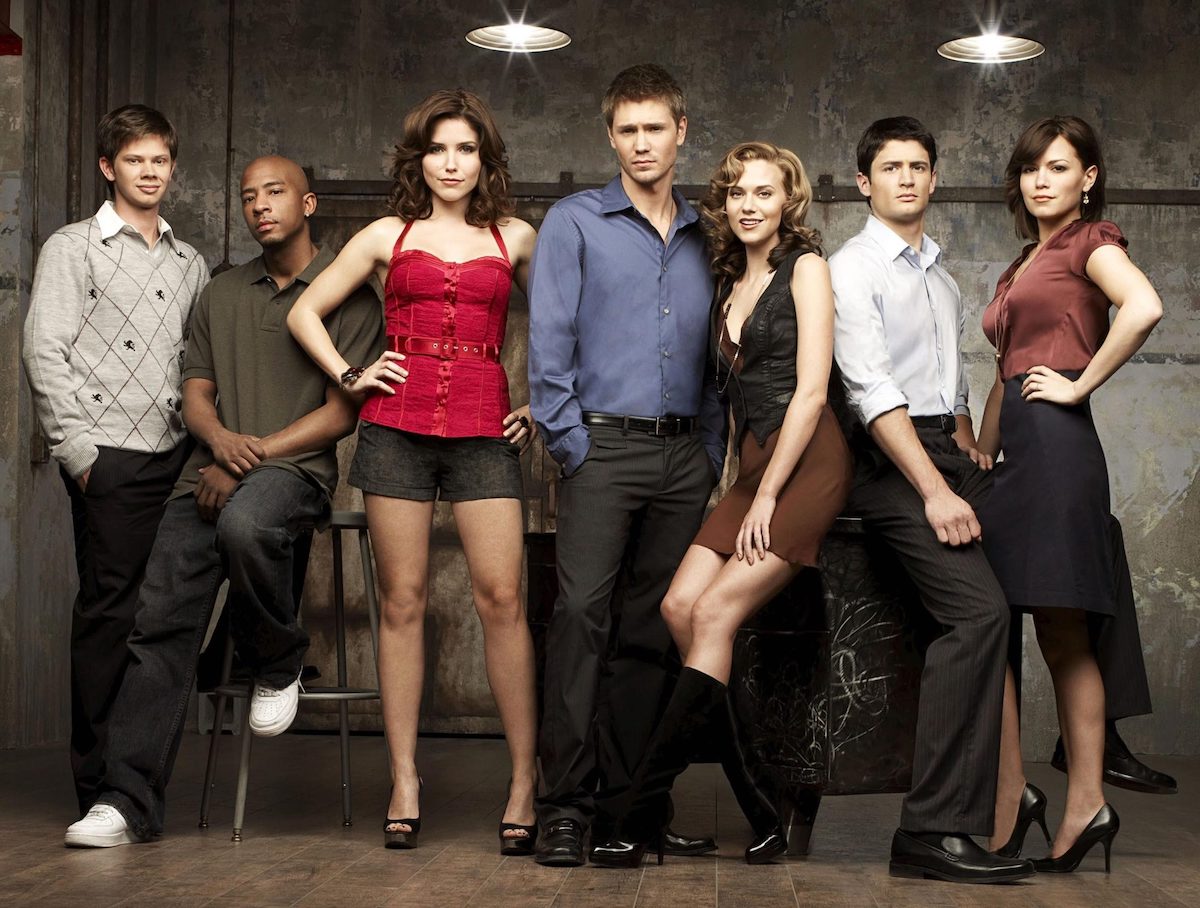 One Tree Hill is regarded as one of the best soap-style dramas to come to eager audiences in the early 2000s. The first few seasons of the show focus on a group of high school students navigating messy drama. One of the storylines centers on two teenage boys who share a father that only claims one of them. He chose to completely abandon the first woman he impregnated. Because of that decision, he never grew close to his firstborn son.

The second most attention-grabbing part of One Tree Hill follows a four-year jump in time. The group of high school students audiences came to know and love skip a few years to their 20s. In their older years, they’re trying to keep their dreams alive while maintaining friendships and relationships. The memorable cast members from One Tree Hill include Sophia Bush who plays Brooke Davis, Chad Michael Murray who plays Lucas Scott, and Hilarie Burton who plays Peyton sawyer. There’s also Bethany Joy Lenz who plays Haley James, Lee Norris who plays Mouth McFadden, and James Lafferty who plays Nathan Scott. Since One Tree Hill is officially over, here are some other shows with similar dynamics you’re bound to love.

The OC premiered in 2003, just like One Tree Hill. That’s one of the biggest reasons why the shows are comparable. They were built for the same audience and kept the same type of viewers in mind. The modern soap opera tells the stories of three different families whose drama constantly intertwines. The Cohen family, the Cooper family, and the Nichol family bond in the Southern California Orange County area. Ryan is the main character of the show. He’s a teenager who grew up on the wrong side of town. He finds himself in Newport Beach and gets taken by a wealthy lawyer who is willing to give him the chance at a nicer lifestyle.

90210 premiered in 2008 and ran for five seasons. It’s the newer version of the original Beverly Hills, 90210 from the 90s. The show is a lot edgier this time around, as it focuses on a tight-knit group of teenagers living in Beverly Hills. They live glamorous lives filled with wealth, beauty, and privilege. Most characters in ‘90210’ are extremely privileged. The main character, Annie, transfers to the ritzy area with her entire family and tries to figure out how to fit in with her new classmates. Her adoptive brother, Dixon, deals with a lot of the same struggles she does, but for some reason, the transition feels a lot easier for him. As Annie struggles to make friends and cultivate romantic relationships, she also makes a ton of mistakes along the way.

Dawson’s Creek premiered in 1988 and lasted for six seasons. The main character, a teenage boy named Dawson Leery, dreams of becoming a beloved filmmaker someday. Instead of just talking about his filmmaker aspirations every day, he actually pulls out a camera and does his best to film home videos and movies with the help of his friends and family members.

His best friend and neighbor is a girl he’s grown up with and grown close to since childhood. Her name is Joey, and even though it’s extremely obvious that she has a crush on Dawson, her crush seems to go over his head completely. Eventually, they pursue a romantic relationship, but the highs and lows they experience together certainly get in the way of a happily ever after.

The Secret Life of the American Teenager shares a lot in common with a show like One Tree Hill. The Secret Life of the American Teenager premiered in 2008 and lasted for five seasons. The show was created by the same person who brought 7th Heaven to life, Brenda Hampton. When a teenage girl named Amy finds out she got pregnant after a one-night-stand at band camp over summer break, everything in her life changes. Her parents, her younger sister, her best friends, and the new guy she has a crush on are instantly impacted by the life decision she’s made. What makes matters worse is that the guy who got her pregnant already has a girlfriend! One Tree Hill also opens up the discussion about teen pregnancy.

Gossip Girl and One Tree Hill are definitely in the same realm when it comes to watching dramatic TV shows about high school students who don’t know how to stay out of trouble. In Gossip Girl, the main characters are being cyber-stalked and harassed by an online persona who knows the deepest and darkest secrets. The online persona goes by the name “Gossip Girl” and receives tips from people all over the upper East side of Manhattan in order to continue adding content to their popular blog.

The main characters, Blair and Serena, are usually the main people frequently being targeted on the blog. In some cases, the rumors being posted about them online even cause them to develop major issues with one another. Some of the notable actors from Gossip Girl include Blake Lively as Serena van der Woodson, Leighton Meester as Blair Waldorf, and Penn Badgley as Dan Humphrey. There’s also Chace Crawford as Nate Archibald, Ed Westwick as Chuck Bass, and Taylor Momsen as Jenny Humphrey.

Degrassi has been running since 2001, and it gets more and more intense each season. Fourteen seasons of Degrassi have portrayed stories of teenagers facing issues surrounding substance abuse, teenage pregnancy, infidelity, stresses about where to go to college, and so much more. The characters transition from childhood into adulthood throughout their middle school and high school years.

Degrassi certainly sheds a lot of light on what the process is like, including all the heartbreaking highs and lows. Some of the most famous actors to spend time on Degrassi over the years include Drake, Nina Dobrev, and Raymond Ablack. Degrassi seems to be a great launchpad for young celebrities.

Gilmore Girls and One Tree Hill have a lot in common. One major detail is that they are both highly dramatic when it comes to the subject of love. Gilmore Girls takes place in a fictitious Connecticut town filled with an eclectic combination of people from different walks of life.

There are artists, dreamers, and “Average Joes” trying to make ends meet in the small local town. Lorelei and Rory Gilmore are the lovable mother-daughter duo with the type of familial bond viewers wish they might be able to achieve in real life. The mother-daughter dynamic they have is so comfortable and close, they are able to talk about pretty much anything.

The Fosters is one of the most insightful dramas one can watch when trying to get a glimpse into what the foster care system might actually be like in real life. Kids who, for one reason or another, don’t have guardians who are able to care for them, are put into the foster system. They generally get moved around from house to house until someone is willing to adopt them permanently.

In The Fosters, a teenage girl named Callie ends up getting adopted by a lesbian couple who make her feel accepted and loved for the first time ever. They also adopt Callie’s younger biological brother. One of the biggest complications in the show is that Callie initially finds herself developing feelings for her adoptive older brother…which is totally against the rules.

Good Trouble is a spinoff of The Fosters, and both of these shows are quite comparable to One Tree Hill for the thought-provoking drama. The Fosters followed a group of foster kids during their teenage years, but Good Trouble continues the story on into two of the foster kids’ lives as they get a little older in their 20s. Callie and Mariana move to the Los Angeles area to succeed in their varying careers. Very early on, they learn that there is tons of sexism in the workplace to deal with. They also realize how fragile friendship and sisterhood can be when it comes to having a crush on the same guy at the same time.

The Carrie Diaries is a prequel to Sex and the City and tells the story of what young Carrie’s life was like back in the 80s as a teenager. She hadn’t met Mr. Big yet –– and she hadn’t become a popular magazine writer just yet either. Growing up is a lot more fun when you’re able to build memories and share experiences with an incredible group of friends.

That’s what The Carrie Diaries is all about. And for these reasons, The Carrie Diaries is comparable to One Tree Hill. Although the teenagers in One Tree Hill aren’t living glamorous lives that will ultimately land them in New York City, they are still constantly building memories they can cherish with one another. They’re also always doing their best to protect each other from the heartache of the world by having each other’s backs.