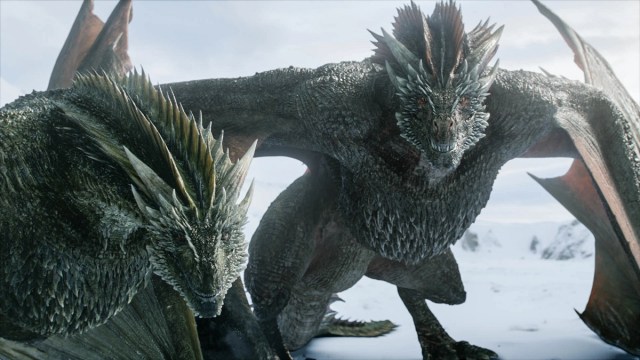 There was a time when HBO could hardly afford to show too much of Dany’s three tiny dragons on Game of Thrones. Even then, there was always a fear that their VFX work might not turn out half decent. Now, more than 10 years since its debut on the network, House of the Dragon is taking flight as a prequel series set 200 years before the events of the original. It will feature not three, not five, not ten, but a whopping seventeen dragons at the height of the Targaryen rule over the Seven Kingdoms, according to HOTD‘s co-showrunner, Ryan Condal.

Based on George R.R. Martin’s Fire & Blood novel, House of the Dragon will deal with the ill-famed Targaryen civil war known as the “Dance of the Dragons.” As its name suggests, the different factions within the Valyrian descendants used their serpentine predators to war over the usual saber-rattler, the Iron Throne of Westeros.

With Condal proclaiming there will be 17 of them in the new spinoff series, fans have been going over some of the most famous and powerful dragons in the 300-year rule of the Targaryen dynasty, speculating as to which could be making appearances in the series.

Below we’ve listed the 10 dragons we will most likely see in the course of House of the Dragon. Until the show premieres on HBO Max and we get a definitive headcount, you should ultimately take this with a pinch of salt. We can’t expect the series to be an exact adaptation of Fire & Blood, after all, and certain changes to the narrative are all but guaranteed when bringing a fictional historical text to the television medium.

Sunfyre was a male dragon belonging to Aegon II. The creature had golden scales and even the fire he breathed, as strange as it might sound, was the color of gold. He played a huge part in the Dance of the Dragons, and according to Archmaester Gyldayn, Sunfyre was the most beautiful dragon to have ever been born into the world.

Since Sunfyre mostly appears in the civil war, and, with House of the Dragon starting a few decades earlier, we might not see him until further into the television series.

Tessarion opened her eyes to the world as early as 120 AC, which is pretty close to the Dance of the Dragons. Prince Daeros Targaryen, the son of Viserys I, rode the “Blue Queen,” whose wings were the color of cobalt while her body reminded everyone of bright copper.

While Tessarion was essentially the runt of the litter and younger than most other dragons, she was of fighting age when the civil war broke out. Due to her small size, Tessarion was nimble, which helped her keep up when the battles became a bit too treacherous.

Just as Tessarion’s colors earned her the name of Blue Queen, Meleys, another she-dragon, came to be known as the “Red Queen” due to her scarlet scales. Meleys is mostly associated with Rhaenys Targaryen, “the Queen Who Never Was,” portrayed in the House of the Dragon series by Eve Best.

Since the character has already been marketed as a main player in the political landscape of the spinoff show, it’s safe to say that we’re going to see Meleys as well, though the when of it is still a matter of speculation. Before the events of House of the Dragon, Meleys was considered to be the swiftest dragon in the Seven Kingdoms. Age may be creeping up to the scarlet old-timer by the time the Dance of the Dragons kicks off, but foes would be foolish to underestimate her battle-hardened cunning.

As you might observe from his name, Sheepstealer wasn’t your run-of-the-mill dragon. He was a wild male that didn’t care much for anything besides devouring the occasional mutton, which he savored above all else. Sheepstealer lived at the back of Dragonmont and would hunt for sheep between there and the lands closest to Dragonstone, the former seat of House Targaryen.

Thus did the locals give him the name “Sheepstealer,” and the fact that they lived to tell the tale reveals Sheepstealer’s distaste for human flesh. That doesn’t mean he was easily subdued, however, as Sheepstealer would only react aggressively when provoked. His scales were the color of “mud brown,” according to Fire & Blood.

He was wild in nature, which is why no Targaryen could ever hope to control him as they did other dragons. Sheepstealer was ancient compared to some of his kin, and he only ever allowed one person to ride him, though to reveal any more about that would push us into spoiler territory.

There isn’t anything particular about Seasmoke that separates him from the rest of the dragons in history, though he did have a part to play in the Dance. When the fighting was at its peak, Seasmoke had grown to a considerable size, but his younger age meant that he was still more agile than his brothers and sisters.

The color of Seasmoke’s scales was a deep silver, and he was ridden by Addam of Hull, one of the “dragonseed” rabble, a name used to collectively refer to the bastards sired by House Targaryen and House Velaryon.

Another silvery dragon like Seasmoke, Silverwing was the famous ride of Queen Alysanne Targaryen. Alysanne was consort to her brother King Jaehaerys I, who is succeeded by Viserys I at the beginning of House of the Dragon.

Even though Silverwing was born between 36 and 41 AC, she was still around when the Dance took place. She also had a fling with Vermithor, King Jaehaerys’ dragon. As one of the most important dragons in history, perhaps even among the most renowned, Silverwing still carries a reputation by the time the main saga starts with A Game of Thrones, with George R.R. Martin namedropping him several times in the course of the books.

While Silverwing was a mighty dragon in her own regard, perhaps her more important kin was Vermithor, the he-dragon King Jaehaerys the Wise rode in his 50-year reign of peace and prosperity in the Seven Kingdoms.

Vermithor was born sometime between 30 and 35 AC, making him a hundred years old by the time the Dance takes place. He was bronze and large in size, coming close to even the greatest firedrakes of that time, including the legendary Vhagar. It wasn’t without reason that he became known as the Bronze Fury.

Imagine a dragon that feasts on his own kind. Wouldn’t that be a terrifying sight? Alas, that’s the only way to go about explaining the deal with Cannibal. He was probably the wildest dragon to ever live, or at least the wildest to be recorded in the annals of Westeros, as he was antagonistic towards the rest of the Targaryen dragons.

What’s more, no one knows the exact date of his birth or the circumstances surrounding it. Around Dragonstone where Cannibal resided, there were some inhabitants who claimed that he lived on the island before the Targaryens came from Valyria. Historians never found enough evidence to verify these accounts. Since Cannibal didn’t get along with the rest of the Targaryen dragons, it wouldn’t be a stretch to assume he was from another tribe.

Caraxes is one of the most fearsome dragons to ever live, and one who is pretty much guaranteed to appear in House of the Dragon since he’s mostly associated with the Rogue Prince himself, Daemon Targaryen, one of the lead characters in the upcoming show played by British star Matt Smith.

Daemon’s dragon was known as the “Blood Wyrm” for his red scales and lean physique. He was also battle-hardened due to years of serving as Prince Aemon Targaryen’s ride. By the time Daemon inherited him in 105 AC, Caraxes was one of the most well-known and feared dragons in all the land. He would go on to play a huge part in the Dance of Dragons. He also was a fixture in the events leading up to the civil war, including the infamous “War for the Stepstones,” which, according to the chronology of Fire & Blood, we might bear witness to as early as the first season.

It would be no overstatement to suggest that Vhagar is a legend to behold even in an era where dragons freely roam the skies of King’s Landing and other parts of Westeros.

Vhagar’s original rider was Visenya, sister to Aegon the Conqueror himself. Visenya rode her alongside Aegon I’s legendary dragon, Balerion the Black Dread, in the quest to subjugate the Seven Kingdoms. In fact, it could be argued that by the time House of the Dragon picks up the story of the Targaryen dynasty, Vhagar is the most ferocious and greatest of dragons, including size. According to Fire & Blood, when the civil war broke out, Vhagar had grown to be almost as large as Balerion, who himself has retained the title of the largest dragon in history since Aegon’s conquest.

Vhagar also plays a huge part in the Dance, so we’re definitely expecting to see him in HBO’s prequel series, even if the VFX work that has to go into bringing him to life on the small screens proves a logistical nightmare.