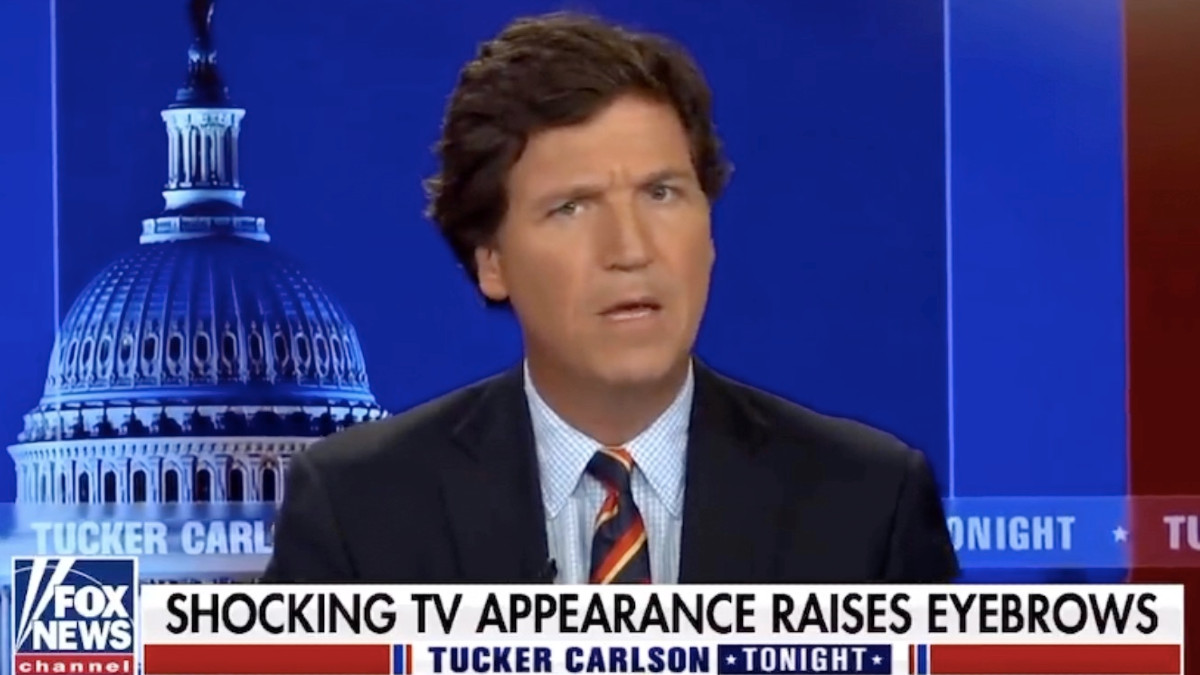 Ever the bastion of maturity, Tucker Carlson launched into a yuk-yuk tirade on Monday evening, accusing Speaker of the House Nancy Pelosi of, uh, being Michael Jackson. Why? This subtle comparison was seemingly made based on observations made on Jackson’s appearance later in life, and the fact that Pelosi is literally an old white lady.

Carlson made the remarks in response to a clip of Pelosi appearing on Face the Nation, where she slammed Republicans for the party’s continued attempts to undermine democracy — first through the U.S. Capitol riot and now through expansive voter suppression laws being enacted across the country. As usual, with nothing of substance or value to add, the Fox News host resorted to petty, schoolyard insults.

“Yesterday was Sunday, you may have found yourself on the couch, idly flipping around the TV dial, and if you flipped far enough, you could have had the shock of your life,” said Carlson at the beginning of the segment.

We’re sorry — TV dial? How old is Tucker Carlson again? All analog TV broadcasts were required by law to end in 2009, and it was many, many decades before that dial-style TVs went out of production entirely. Hey, if we’re going to split hairs, let’s split some damn hairs, Tucker.

At any rate, Carlson was just getting started.

“Now let’s be clear, this wasn’t a video of Michael Jackson performing his hit songs of the 1990s,” he continued, demonstrating a likewise stunning lack of knowledge about the King of Pop’s discography — who produced the bulk of his singles in the ’70s and ’80s.

“This appeared to be a living version of the international pop star that news reports claimed died of a drug OD more than a dozen years ago. And yet despite those claims there he was, fully, undeniably Michael Jackson talking on television. How can that be? Honestly, we have no idea. We’re not theologians here. This is merely a news program,” he said, introducing the clip. At least one of those two statements is correct!

“See? Michael Jackson. That was him,” he added after cutting back to the studio. “No ‘Billie Jean.’ Apparently, he’s given up singing and is telling lies about politics. Same man. If you’ve ever seen Michael Jackson, you cannot forget the face — though admittedly, he’s had a lot of work done since we saw him last.”

Again, the name-calling was evidently Carlson’s way of distracting from the fact that many Republicans — even some right inside the Fox News studio — are allegedly complicit in attempting to overthrow U.S. democracy.

Political journalist Aaron Rupar pointed out that the childish rant was the only thing Carlson had tweeted in four whole days. “Utter trash,” he insinutaed, using trashcan emojis.

“Nah I am screaming because this was unnecessary,” added Twitter user @shOoObz.

Honestly, that would make a pretty great motto for Fox News since they gave up any and all illusions of “Fair and Balanced” years ago. “Fox News: Nah I Am Screaming Because This Was Unnecessary” seems way more accurate these days.