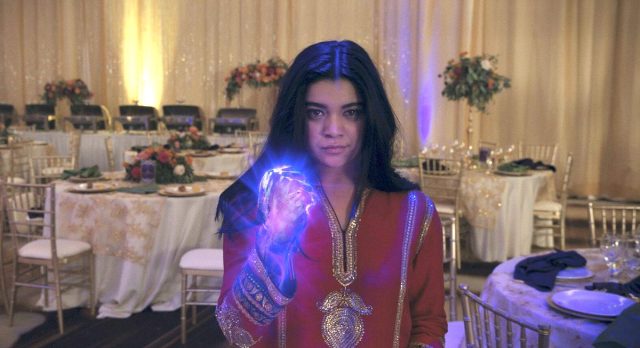 Ms. Marvel has already been met with wide approval from the South Asian diaspora. Aside from the straightforward representation of having a Pakistani-American superhero in Kamala Khan, the show has delved deep into her family life, religion, and the second-generation immigrant experience in America.

This week’s episode takes a trip to Pakistan to visit Kamala’s grandmother and, perhaps more so than previous episodes, it’s absolutely crammed with tiny nods that prove the show’s creators know the culture. Right now, Twitter is lighting up with fans spotting accurate moments in the newest episode:

One fan recognizes the passengers ignoring the protestations of the air stewardess and getting up to retrieve their bags before the plane has landed:

Another fan points to the accuracy in the set design of Kamala’s grandmother’s house:

As well as the tiny shots in the Karachi street scenes and the slang being true to life:

Others are loving seeing pani puri on screen (Kamala is wrong; this stuff is delicious):

As well as eating biryani out of a bag:

We’re now four episodes into Ms. Marvel, and the series doesn’t seem to be dipping in quality, or dragging like other Marvel TV shows. The final shots indicate that at least part of the fifth episode will be a time travel caper set during partition (gee, I wonder who’s going to provide the stars to lead her grandmother to the train…), so expect yet more fun little flourishes to come.

It’s clear that for South Asian audiences, Ms. Marvel is knocking it out of the park, so here’s hoping it continues on this exact trajectory.