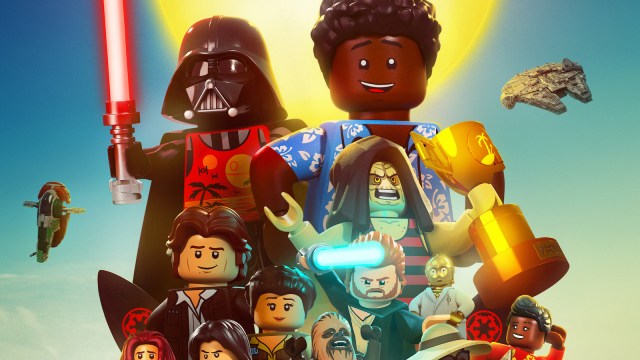 Could we be about to have a new best Star Wars trilogy? Following the surprisingly awesome LEGO Star Wars Holiday Special and LEGO Star Wars Terrifying Tales, those minifigs from a galaxy far, far away are back for LEGO Star Wars Summer Vacation. The latest TV special is officially just one week away from premiering on Disney Plus, and this new promo (see the tweet below) promises that it’ll be the best vacation ever. Because even Palpatine deserves some pampering sometimes.

Summer Vacation follows the sequel trilogy gang as they hop aboard the luxurious starcruiser the Halcyon for some much-needed R&R. But when Finn gets separated from his friends, he’ll encounter three Force ghosts — Anakin Skywalker, Obi-Wan Kenobi, and Leia Organa — who recall their own holidays that went awry. If you’ve ever thought “yeah, Empire Strikes Back is pretty good, but it doesn’t have Vader in a Hawaiian shirt” then, boy, is this the special for you.

As an added bonus, a bunch of familiar favorites from the movies reprise their iconic roles for Summer Vacation, including Anthony Daniels as C-3PO, Kelly Marie Tran as Rose Tico, and Billy Dee Williams as Lando Calrissian. The special also puts right a terrible oversight of the entire franchise so far and finally makes Weird Al part of the Star Wars canon. Yankovic is set to play a SW universe version of himself called Vic Vankoh.

Although they obviously don’t take themselves too seriously, by weaving together the whole Skywalker saga into these anthology-style storylines, the prior LEGO Star Wars specials have managed to win over the vast majority of the notoriously hard-to-please fandom. So with any luck, Summer Vacation will follow suit when it surfs its way onto Disney Plus in just seven days’ time next Friday, Aug. 5.