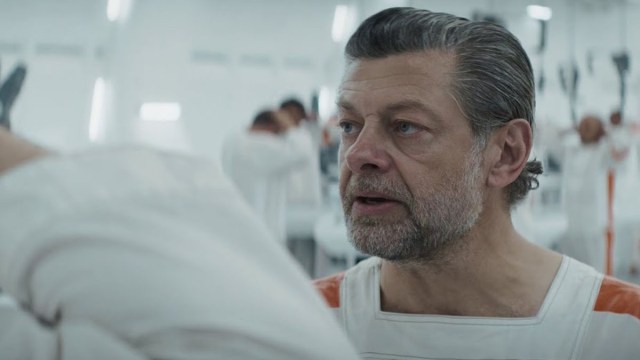 Andor fans were first introduced to Kino Loy, played by Andy Serkis, during the eighth episode, as a prisoner on Narkina 5. In addition to his status as an outlaw, Loy is still the manager of the inmates working at Unit 52D. During his time at the unit, Loy is seen in continuous competition with other managers at Narkina 5, whose objective is to get the highest input until they are allowed to go home.

During the ninth episode, some shocking revelations were unveiled. While in a moral altercation with Cassian, the duo discussed the latter’s rebellious hope for escaping Narkina 5. Loy tried to show the inmate how those efforts would be in vain, and how it’s better to have no hope at all. At the same time, Loy and Cassian discovered that, when an elderly inmate was euthanized, several other prisoners had been “fried.” This would lead to Loy establishing an alliance, with the intent to escape.

The tenth episode reaches the climax of the great escape at long last, but the escape plan doesn’t quite go as planned for Loy, leaving fans wondering what truly happened and whether or not the floor manager escaped or if he jumped to his inevitable death.

What happened to Kino Loy and is he still alive?

Loy is an absolutely indispensable part of the escape plan. In spite of the resentment of other inmates, the prisoners still listen to him, admitting and proving his role as a leader on the floors. While putting the plan into work, initiating the action by bursting a water pipe, which freezes the floors, the inmates start viciously hurling pieces of metal from their workstations the second Loy tells them to start fighting. This leads to the inmates taking over the prison.

Through hurdles and some setbacks, Cassian and Loy eventually reach the mainframe of the prison, when Cassian takes over the intercom, urging everyone to gather around, inciting the mass to run, club, and kill, escaping at all cost necessary. However, things turn for the worse when they all reach a doorway leading to the prison’s existence, causing them to face nothing but the ocean.

Completely overwhelmed and without an escape route, the inmates are left with no other choice than leaping out into the water or surrendering. Aiming and hoping for freedom, the group all opt to jump and swim to the nearest shore, with the exception of Loy, who says “I can’t swim,” as he is pushed into the water.

As for his current status, it is impossible to decipher whether or not the floor manager has survived the treacherous waters. During all the commotion, it is left to interpretation whether to not Loy leaped into the water, if he was shoved off the ledge or if he chose to stay behind with all the guards at Narkina 5. Some theorists and eagle-eyed fans believe that, as the guards were visibly upset and terrified, Loy and all the prisoners might have found freedom in escaping through the ocean.

The latest Andor episode will be available to stream on Disney Plus on Nov.17, giving just enough time for fans to gather their thoughts and feelings while awaiting one of the most anticipated episodes thus far.