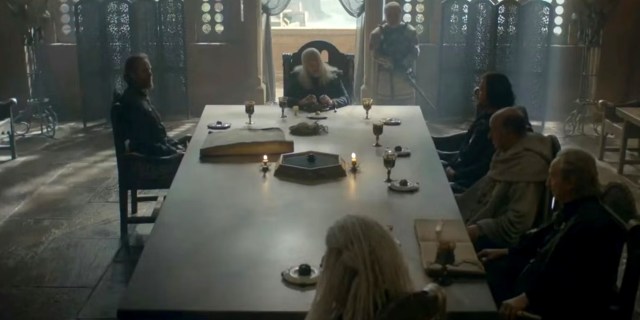 “Keep your eye on the ball” is one of the most common bits of advice given to sportspeople. However, the phrase also sums up what most House of the Dragon viewers did during the Small Council scenes found in the first episode.

When viewers see the Small Council meeting in the Red Keep, each council member has a small plate in front of them, and on this plate sits a ball. In the center of the table sits another, larger surface, with a single ball atop it. However, the meaning of these balls is never explained, leaving viewers utterly confused.

But don’t worry, here is everything you need to know about the balls found in House of the Dragon.

What is House of the Dragon?

House of the Dragon is a prequel to Game of Thrones, based on the A Song of Ice and Fire novel series and its spin-off novel Fire & Blood both written by George R. R. Martin. The series chronicles the history of the House Targaryen, focusing on the bloody war of succession that would later become known as the Dance of the Dragons.

What were the balls about?

While the balls were not explained during the episode, the staff working on the episode explained their meaning to the Hollywood Reporter. Claire Nie Richards said the balls “represented the council coming in and being part of the meeting.”

“Everybody shows up for work and they ‘punch in, I thought it was really cool. It’s a way of visualizing the set formality of the Small Council chamber. It’s enjoyable; we should have things that we like in this world.”

So the balls are markers showing which council members are present, with the ball remaining in the center representing a council member who isn’t present for that meeting. Only time will tell if these balls take on greater symbolism as the story progresses, but even if they don’t, they are an excellent piece of subtle world-building.