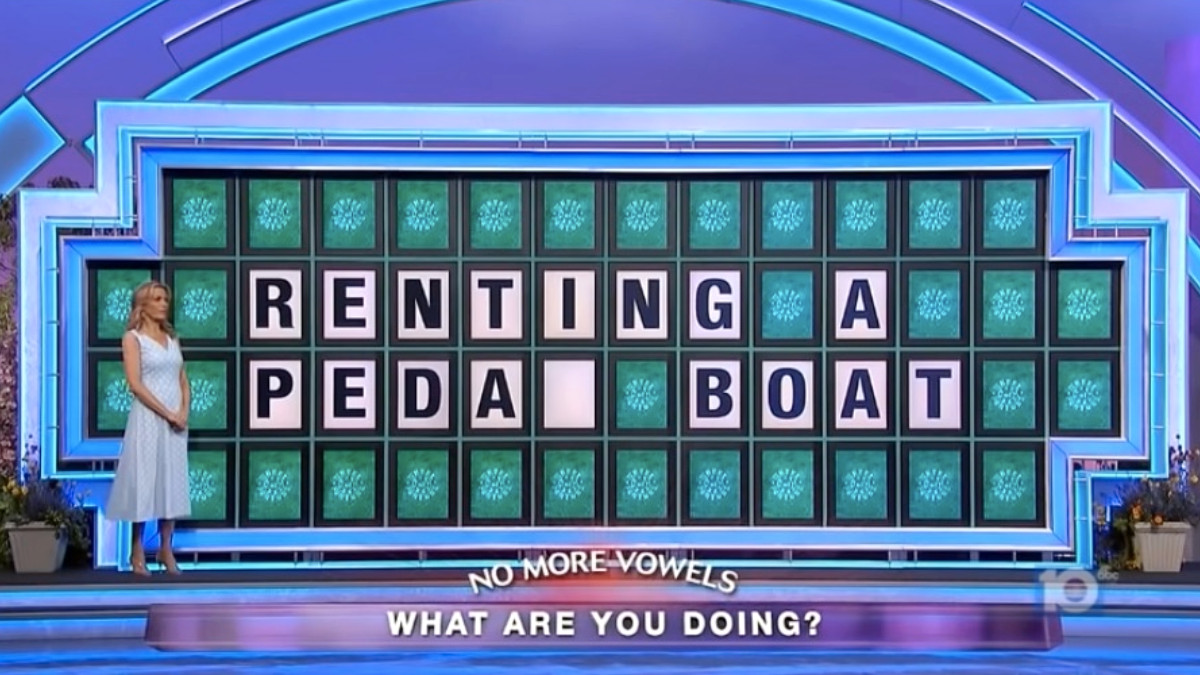 Wheel of Fortune contestants have been on a hot streak lately, but not exactly the sort of hot streak most of us would brag about. After the popular, long-running game show went viral in early March for inexplicably and repeatedly bungling the answer to the common phrase, “feather in your cap,” just two weeks later an entirely new panel of contestants got dinged on “renting a pedal boat.”

And they got close! So close!!

The first contestant who attempted to solve the puzzle, Crystal, did so with five letters missing from the board, giving it the old college try with “renting a paddle boat” — which, of course, was grammatically impossible given the number of letters on the board.

Next up was a player named Seann, who guessed the remaining two “T’s” and two “E’s” left on the board, until all that was left was the “L” in “pedal. “I’d like to solve,” said Seann, guessing “renting a paddle boat,” which was no less grammatically impossible or wrong the second time around.

From there, a contestant named Michelle did not even try to solve the puzzle, but guessed the letter “M.” Renting a pedam boat??

“I have to spin,” Crystal sheepishly admitted, when it came back to her turn, and likewise whiffed with a “W.”

Finally, Seann correctly solved the puzzle to put the cringing viewers at home out of their misery. But what makes this Fortune Fail unique is that, unlike last time, when one player clearly knew the answer but fell to the misfortune of the Wheel, this time, all three players shit the bed.

It was just a breathtaking scene to witness, as many fans took to Twitter to see if anyone else caught the trainwreck. “New Wheel of Fortune ‘feather in your cap’ just dropped,” quipped one user.

“What in the actual hell did I just watch?” asked Barstool writer Eric Nathan. “Everyone on Wheel of Fortune deserves to be bullied. My heavens.”

Discovery host Josh Gates recorded a reenactment of himself watching the debacle.

“Is the American school system that bad??” queried another user. “The hell is a pedam or pedaw boat?” (Also, we regret to inform him that it is indeed that bad.)

“People who can play Wheel of Fortune almost out of stock,” joked another user.

Unfortunately, while everyone may be having fun with the latest blooper, one person who does not cosign the gentle ribbing of Wheel of Fortune contestants is host Pat Sajak. After the last fail went viral, Sajak took to Twitter to poop all over everyone’s party.

“It always pains me when nice people come on our show to play a game and win some money and maybe fulfill a lifelong dream, and are then subject to online ridicule when they make a mistake or something goes awry,” wrote Sajak at the start of a long-winded, nine-part Twitter thread.

“Last night’s ‘feather in your cap’ puzzle was a case in point. Sitting at home, it seems incredible that they couldn’t solve it, but I knew in real-time what was happening,” Sajak continued. The first attempted solve was ‘feather in your hat” which, by the way, is how a lot of people say it. So all three players thought it was a good solve, and were stunned when I said it was wrong.”

“Now imagine you’re on national TV, and you’re suddenly thrown a curve and you begin getting worried about looking stupid, and if the feather isn’t in your hat, where the heck can it be? You start flailing away looking for alternatives rather than synonyms for ‘hat.’

And, of course, when it’s solved, you want to crawl in a hole. I’ve been praised online for ‘keeping it together’ and not making fun of the players. Truth is, all I want to do is help to get them through it and convince them that those things happen even to very bright people.

But mocking them online and calling them names? These are good people in a bad situation under a kind of stress that you can’t begin to appreciate from the comfort of your couch. Good-natured laughter is one thing. Heck, they laughed at themselves. But, hey, cut them some slack. Unless you’re there, you have no idea how different it is in the studio.

I have fun with players and I tease them occasionally, but when things go wrong, I feel for them, and I try to salve the wounds on camera and off. So, yeah, it was an oddly entertaining puzzle and it’s okay to laugh at the situation. But have a little heart.

After all, you may be there one day. And no one wants to be trending on Twitter.

Jeez, Pat — we’re just trying to have a little fun! It’s true that no one wants to be trending on Twitter, but thems the risks you take when auditioning for Wheel.