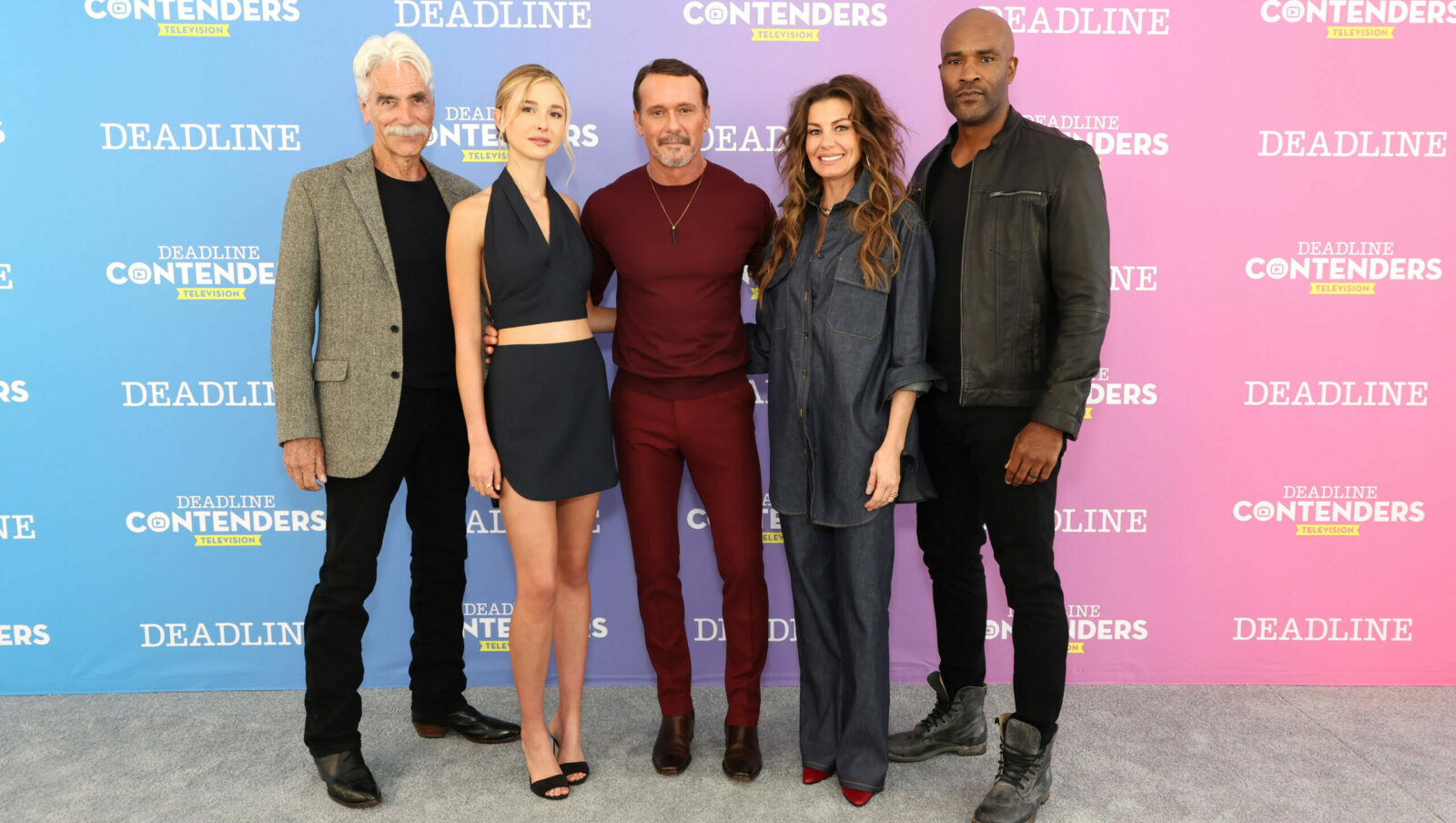 Paramount’s Yellowstone has been a gripping drama for going on five seasons now, and viewers can’t get enough of the Duttons’ story. Of course, the ups and downs and twists and turns of their journey is a thrilling watch, but the family’s back story is intriguing.

1883 tells the story of John Dutton’s great-grandfather, James Dutton, and his family as they travel west to reach the land of promises and hope. They find a lot of heartache and devastation along the way, but they find something else too – in the midst of despair, they find a way to keep going.

While Yellowstone ups the ante with drama, relationships, and many trust issues, 1883 was more focused on the fight to simply stay alive. Without the modern accommodations we all enjoy — and the advances in life and medicine — every day on their journey was a matter of life and death.

Some of the best actors and actresses in the business brought the storyline to life. The way fans hung on their every word is a testament to their talent and dedication to their roles. The Dutton family and those that traveled alongside them wanted better for themselves and their families, by any means necessary.

Of course, the journey wasn’t their first rodeo, so just where have you seen the cast of 1883 before? Let’s take a look.

Isabel May had her breakout role with the feel-good Netflix series Alexa & Katie. Alexa & Katie tells the story of the titular characters as Alexa experienced a cancer diagnosis and leaned on her best friend, Katie.

Their friendship is the kind that you hope to have, and it warmed the hearts of viewers, young and old. From the first episode to the finale, their friendship hooked viewers – and many fans watch Alexa & Katie again and again.

May has also starred in Young Sheldon, I Want You Back, Run Hide Fight, and Let’s Scare Julie. May has two films anticipated to release this year; The Moon and Back and Wonder Twins. Of course, all that is in addition to her starring role as Elsa in 1883, the series she also narrates.

Elsa is the daughter of James and Margaret Dutton, and she’s coming of age as the family begins their trek west. It’s a nod to her formative years and how different things looked for young adults back then and how much they looked the same.

Her character is a catalyst for change while she’s a young woman who wants love, beauty, and something to light a fire within her. Elsa has, arguably, the most full-circle story arc of the series.

Tim McGraw broke out in the entertainment realm with a song titled “What Room is the Holiday In” in March of 1991, and he’s been a legend in country music ever since. McGraw’s most recent album was released in 2020 and is titled Here On Earth.

With several hit albums and songs, McGraw is a household name for fans worldwide, and his role in 1883 further solidified the multitude of his talents. While the series isn’t his only acting job, it’s certainly a memorable one. Playing James Dutton, he stole the show as the patriarch and leader of the settlers.

His character is tough, as he must be, but his soft spot shines when his family is concerned. Dutton wanted to take his family to a place where they’d thrive instead of just surviving, which meant making enormous sacrifices. He dedicated all of himself to the role, and it shows.

McGraw can also be seen in The Blind Side as Sean Tuohy, The Shack as Willie, Flicka as Rob McLaughlin, and Friday Night Lights as Charles Billingsley.

Alongside husband Tim McGraw, Faith Hill is another legend in country music. The two have recorded several songs together and have also gone on a world tour to wow fans worldwide.

Hill, too, has dabbled in acting while still making a career out of music, and she’s done so in Touched by an Angel, Promised Land, and The Stepford Wives. She’s also been a guest star on several game and competition shows throughout her career.

Hill plays James Dutton’s wife, Margaret, in 1883, where she shines as a strong woman dedicated to her family. She isn’t your run-of-the-mill mother, but on the Oregon Trail – she couldn’t have been. She showed her children tough love, especially daughter Elsa, but the two had moments of complete and total adoration for one another, too. She wanted to protect her at all costs, while Elsa wanted to be wild. Hill made Margaret Dutton the kind of character you root for.

Sam Elliott has been a staple of the acting industry for decades, and his performance in 1883 is a standout show in itself. Playing Shea Brennan, he led settlers on the Oregon Trail with a take-no-prisoners attitude and a tough exterior.

Beneath the thick skin was a guy who understood that the road they would travel would break some settlers, kill others, and that few would survive. He was a beacon of hope while keeping them all grounded and played an essential role in the series.

Fans of Elliot know he’s been in more television series and films than one can accurately count, but everyone has a favorite.

He’s been Beau Bennett on The Ranch, Avery Markham in Justified, Chance McKenzie in The Yellow Rose, and Joel Baldwin in American Bikers.

Elliott’s first film was The Way West in 1967, and he played Missouri Townsman. From there, a star was born. Ironically, he also had a role in the 2020 film A Star is Born. Elliott also took on the part of Larry Dodd in Rush, The Stranger in The Big Lebowski, Coach Moore in Draft Day, and Lee Hayden in The Hero.

LaMonica Garrett is well known as Anti-Monitor, a DC villain appearing in several series such as The Flash and Batwoman. He’s talented across several genres, and 1883 brings him to life as Thomas, a Pinkerton agent who travels the Oregon Trail to help settlers find their way.

Thomas allows a sense of hope on the treacherous journey, a light in an overwhelmingly dark circumstance. The settlers are trying to find a home in a world that wants nothing to do with them, and his character is someone who brings a renewed sense of positivity to the experience.

If you look back at 1883 after watching, there’s a unique light from Thomas that the series would be severely lacking in his absence. Some of our favorite scenes of the series star Garrett as Thomas, like the mirror he purchases for someone special and the moments he shares with the Dutton family. He is the reason the group made it; his pluck helped them all survive.

Garrett will bring that same charisma to his most recent role in Amazon Prime’s The Terminal List, and you can also see him in Designated Survivor, The Last Ship, and Sons of Anarchy.

Eric Nelsen played the sweet and quirky Ennis in 1883 and, if you ask anyone, met his fate far too soon. Ennis found a home in the traveling settlers, making a habit of it long before the Oregon Trail, and he found a special bond with Elsa Dutton herself.

He lived a simple life, but it was full of joy, and Nelsen lent a wonderfully positive attitude to the character, who stole the hearts of viewers all over the globe. If he looked familiar when you tuned into 1883, there’s a good reason for that — Nelsen has starred in several series and films.

He was AJ Chandler in All My Children, Hazzard in NYC 22, Daniel Garrett in The Bay, Bram in The Affair, Howie in A Walk Among the Tombstones, Fred in Nightmare Cinema. He’s also a Broadway star in 13 and The Inheritance.

Nelsen has won several awards for his work so far, and after his portrayal of Ennis, fans see a long future in the entertainment realm in his future.

Portraying the role of Sam in 1883, Martin Sensmeier stole the show as a powerful and confident character the settlers met on their travels.

Only appearing in 3 episodes, Sam was a fan favorite because his story was so multifaceted and complex. A Comanche Warrior, Sam saved the life of Elsa on two occasions and stole her heart in the process. While she grieved the loss of her first romance, Sam solidified a place in her heart by showing her the depth of her power.

Sam made Elsa brave because he was brave; he trusted the land and their circumstance and that things would be okay. He showed her a new way of life and that believing in yourself was the greatest gift of all.

The cast of 1883 brought fantastic characters to our realm, and they’re all responsible for bringing phenomenal stories to life via other characters in their repertoire as well.

You can watch 1883 in its entirety, streaming on Paramount Plus now.