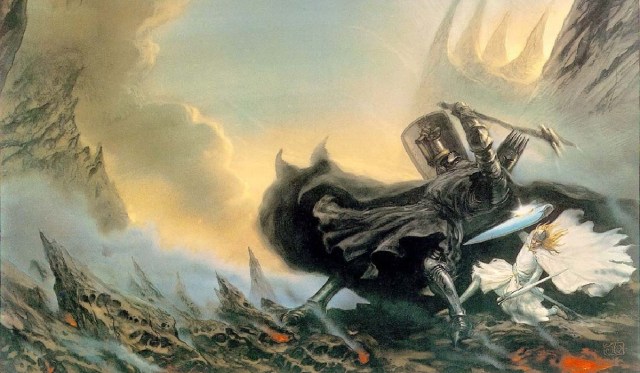 The Lord of the Rings: The Rings of Power might take place a few thousand years before the events of the main J.R.R. Tolkien books, but to know the inner workings of the Second Age and how every character came to be where they are, we have to go back to the days of the Eldar and the shaping of Arda.

Despite this huge gap, Amazon Prime’s new show will once again feature Sauron the Deceiver as its overarching antagonist. Many beleive that the creator of the One Ring is the true personification of evil in Middle-earth, but the truth is something different entirely.

Here’s everything you need to know about the war that the characters in The Rings of Power constantly refer to, and how Sauron factored into those events based on the chain of events Tolkien describes in his 1977 book The Silmarillion.

The song of creation

Before there were any magic rings, Dwarves, kingdoms of Men, realms of Elves, light, living matter, or even a space for existence, there was Eru, “the one, who in Arda is called Ilúvatar”. The omnipotent creator first made the Ainur, the Holy Ones, who sat in his court and sang before him. The Ainur worked in harmony with Eru and gave life to Ainulindalë, the music of creation, through which the universe of Eä came to be.

In that universe there was a planet called Arda, and on that planet there was a continent called Middle-earth, where most of Tolkien’s legendarium takes place. In those early days not all the Ainur were content with the responsibility Eru had given them, for in the Timeless Halls where the big man in the sky presided, the greatest and most powerful of the Valar was Melkor, a name that translates to “he who arises in might.”

Melkor grew impatient with the Void of nothingness beyond the Halls, so he endlessly searched for it in the hope of finding the Flame Imperishable, which was Eru’s source of strength. It was the vessel through which he could exercise his creativity and bring things into existence. Melkor, the greatest of all angels, never found the Secret Fire, but his time apart from the fellow Ainur and his brother Manwë gave rise to thoughts that were not in accord with Eru’s will.

According to “Ainulindalë,” the first chapter in The Silmarillion, when the time of creation came and Eru and his angels set about composing the divine song, Melkor introduced a counter melody of his own. When the song was spun into existence, Eru rebuked Melkor and let him know that, even though his was a path of dissidence, there’s nothing he could come up with, originally, that wouldn’t find its origin in Eru himself. That angered Melkor and further isolated him from the rest of the Ainur. Then came the time for the Valar to descend unto Arda and shape matter into the world we recognize now.

The rise of Morgoth, the Black Foe of the World

Melkor arrived in Arda and immediately claimed the land for his own. The rest of the Ainur looked towards Manwë, who better understood Eru’s vision for Ainulindalë. What the rest of the Valar wrought, Melkor continuously destroyed, resulting in a misshapen Middle-earth. When the Valar Tulkas the Valiant, Champion of the Valar, arrived on Arda, he tipped the balance towards the rest of the Ainur, and together they managed to drive Melkor away for a while, which also allowed them to complete their work on the landscape.

The Valar created two giant lamps to illuminate the world, but Melkor returned with a great host and destroyed the lights, engulfing the world in darkness. Melkor also corrupted the very foundations of Earth and then escaped capture. The combined might of the Valar could’ve subdued him then, but they instead focused their efforts to stop the world from collapsing in on itself.

Tolkien notes that the Valar went to the lands of Aman and created Valinor, the Undying Lands, erecting two luminous trees to take over the two lamps. It was at this time when the first Children of Ilúvatar, the Elves, woke up under the night sky in Middle-earth. Melkor captured and corrupted some of these new creations, presumably creating the first generation of Orcs, but the Valar returned to Middle-earth to stop Melkor from subjugating the Elven race entirely. The Ainur were always hesitant to openly challenge Melkor, not out of fear, but due to the fact that the sheer destruction of a head-on confrontation like that would undo all their work. This was an exception, however, as they realized that saving the Elves was much more important than preserving Middle-earth.

So began the Battle of the Powers, with the host of Valar laying siege to Melkor’s stronghold and overpowering him completely. At that time, Sauron, one of the Maiar — lesser angels serving the Valar — had joined forces with Melkor. When the Valar defeated their sinister sibling and chained him, he was brought to Valinor to stand trial, but Sauron escaped capture. While there, Melkor prostrated himself in front of Manwë, begging forgiveness. Manwë, the King of the Valar, was once again uncomprehending of Melkor’s evil, which is why he granted him pardon, though not release.

When he eventually got free, Melkor used his cunning to corrupt the Elves, telling them of the Men’s arrival on Middle-earth and Eru’s plans for them to inherit the Earth. Fëanor, who would go on to become Melkor’s greatest enemy, was a Noldorin lord who almost fell for these lies, but when he took his grievance to the Valar, they realized that Melkor was at work again. Tulkas immediately took off, but Melkor had already escaped.

The Dark Lord eventually returned to Valinor with the giant Ungoliant, a spider whom most Lord of the Rings fans would recognize as Shelob’s ancestor. Melkor and Ungoliant infiltrated Aman and destroyed the Two Trees, once again covering all the lands in darkness. Melkor also stole the Silmarils, Fëanor’s most prized creations, which had been made from the essence of the Two Trees. Melkor returned to his fortress of Angband in Middle-earth, and there adorned his crown with the three Silmarils. After this theft, Fëanor gave Melkor the name Morgoth, which in the common tongue translates to “the black foe of the world.”

Influenced by Morgoth, and angered by the theft of his divine jewels, Fëanor decided to give chase and lead the rest of Noldor towards Middle-earth. Noldor had no ships of their own, which is why they pleaded with the Teleri to grant them passage on their vessels. The Teleri tried to dissuade the proud Elven lord and his kin, but they wouldn’t take no for an answer, which resulted in the two houses drawing swords and fighting a bloody battle, an event that became known as the Kinslaying at Alqualondë. These actions further enraged Valar, who forsook Noldor and barred them from returning to the Undying Lands.

With the Valar vowing not to help the Noldorin, Fëanor arrived on Middle-earth and challenged Morgoth alone. At the time, Melkor had spent most of his primordial power to influence the very foundations of Arda, growing weaker with each confrontation. That’s why he was trapped in his physical form, unable to change form or exert great power as he once did in the early days of creation.

The Elves grew in strength and besieged his fortress of Angband, a siege that would last many long years. What then followed were a string of battles and conflicts that brought much peril to Middle-earth, with neither the Elves and Men nor Morgoth gaining the upper hand in the war. This is also when Morgoth sacked the legendary city of Gondolin, bringing the proud Elven race to heel.

When it seemed like the Elves could no longer keep Morgoth’s evil at bay, Eärendil the half-Elven mariner traveled to Aman with one of the Silmarils as his guide, breaking through the magic spells that Valar had put there to ensure the Noldorin could not return. Eärendil pleaded for the lives of the Children of Ilúvatar in the Valar court, persuading them to lend their strength against the Black Foe. Seeing that the time was ripe for a counter-attack of their own, the Valar finally relented.

The War of Wrath

This history, taking place over many thousands of years and chronicled in The Silmarillion, The Unfinished Tales, and The History of Middle-earth anthology series, finally brings us closer to the cataclysmic war leading to Amazon’s The Rings of Power. At the end of the First Age, the host of Valinor arrived on Arda and reinforced the kingdoms of Elves and Men. With their combined strength, they launched a final assault on Angband, commencing the War of Wrath.

The Valar, Maiar, Elves, Men, and all the free peoples and powers of Arda fought against Morgoth, his Balrogs, firedrakes and other minions in a battle that shook the foundations of the Earth and lasted more than 40 years. In the end, the armies of the light managed to defeat Morgoth again, incarcerating him in the same magical chains that had held him for almost 3,000 years in the Undying Lands. Only this time, the Valar exiled Morgoth from Middle-earth, casting him through the Doors of Night and into the endless Void of nothingness beyond.

The Valar retreated back to Valinor, and so began an era of peace in Middle-earth, with the enemy defeated and the influence of his evil gone from the lands. Morgoth would continue to corrupt the minds of Elves and Men, spending years pouring most of his strength into tainting the very life on Middle-earth. Unbeknownst to everyone else, this perhaps helped fulfill Eru’s initial vision of a free will for his children to choose good or evil.

Sauron had been laying low ever since disappointing Morgoth when an Elven princess by the name of Luthien Tinuviel bested him. Morgoth’s lieutenant pleaded for mercy and was told to arrive on the Undying Lands to stand trial. Sauron instead hid in Middle-earth, laying dormant for several centuries to avoid the Valar’s ire.

In the middle of the Second Age, Sauron starts to stir again, deceiving the free peoples and creating the rings of power to dominate Middle-earth. He was also involved with the tragic downfall of Númenor and the War of the Last Alliance, which will be chronicled in The Lord of the Rings: The Rings of Power when it arrives on Prime Video in September.