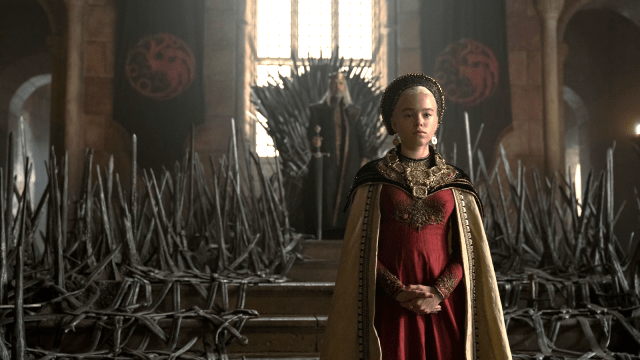 As we know from Game of Thrones, many rulers have sat upon the Iron Throne in the lands of Westeros, and House of the Dragon features a new king of the Seven Kingdoms.

If you’re an avid reader of George R.R. Martin’s work then you probably already know about the history of Westeros and the Targaryen dynasty. If not, you might not know who the king is in House of the Dragon.

To help get you up to speed, here are the basics you need to know about Westeros’ ruler during the events of House of the Dragon.

Who is the king of Westeros in ‘House of the Dragon’

In the year 101, the Kingdom of Westeros in House of the Dragon changes hands after the very opening scene of the show, as King Viserys I Targaryen (Paddy Considine) is named successor to his grandfather Jaehaerys.

Viserys is very different from the Targaryen kings we’ve heard of during the events of Game of Thrones as he is more caring and level-headed. He is also smart about the dealings going in within his court as they plot toward their own ambitions, but he may not be wise enough to outplay them.

According to the book Fire & Blood, Viserys was the fifth Targaryen to sit on the Iron Throne. He once rode the famous dragon Balerion, also known as The Black Dread, but once the dragon died he seemingly never bonded with another dragon.

As House of the Dragon continues fans will get to know more about the King and his story, but if you’re eager to jump ahead the full tale of Viserys Targaryen I can be read in Fire & Blood.