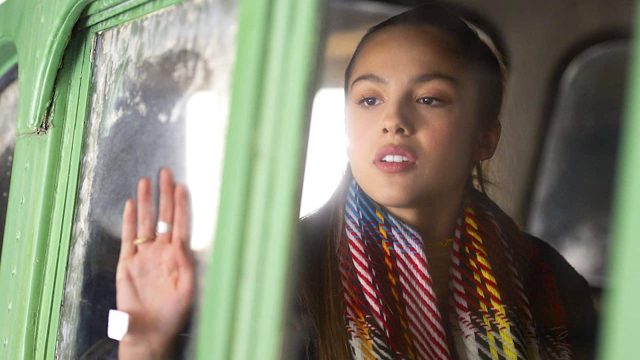 Season three of High School Musical: The Musical: The Series aired its first episode on Disney Plus this Wednesday, and within the first seven minutes it became clear that Olivia Rodrigo’s character Nini is, indeed, getting a sendoff from the show.

Ever since her debut album Sour broke record numbers and transformed her into a global superstar, Rodrigo’s time on HSMTHTS was limited. Filming for the third season began back in January 2022, smack dab in the middle of preparations for Rodrigo’s 2022 Sour tour, which kicked off on April 2 in San Francisco, California. Finding a way to fit in filming for HSMTMTS and preparing for her sold-out stadium tour simply wasn’t possible for the three-time Grammy Award-winning artist — and showrunner Tim Federle was fully aware of this.

In the months leading up to the premiere of season three, speculations regarding Rodrigo’s place in the cast were answered when an official cast list was released by Disney Plus. Instead of showing Rodrigo’s Nini as a main character, she was listed as a guest star instead. This obviously catered to any contractual agreements Rodrigo had with Disney Plus, but also gave the writers an ability to tie up her storyline with a proper bow.

What that looked like for Nini in the season’s first episode was going on a road trip to Southern California with her moms to discover where she was born and where her parents met. She’s still working with Gina’s fancy music producer brother, but as she tells Miss Jenn in her kitchen, “I just feel like I’m missing a spark.”

“Honestly, it just feels like these last few years have been leading up to something really good, or big, but I can’t name it or put my finger on it,” Nini says. In the episode’s final moments we see her pack her guitar into her mom’s trunk and drive away, the symbolism of which is lost on anyone.

“From a pure logistical standpoint, the idea of Olivia doing the entire season and doing her tour was immediately looking impossible,” showrunner Federle said in an interview with Entertainment Weekly. “I think there’s no immediate plans for Nini to be a huge part of the show going forward,” he added.

The only question remaining is who will replace Nini this season and in future seasons? As it turns out, it’s someone who’s already in the cast.

Who will replace Olivia Rodrigo in season three of HSMTMTS?

If you pay close attention to Gina (Sofia Wylie) in the first episode you will catch intentional moments that are clearly meant to set up her up for a larger part in the show. Not only is she auditioning for the lead in Camp Shallow Lake’s student production of Frozen, but she is also the star of her very own love triangle starring EJ and Ricky — the same love triangle Nini was in during season one.

“Sofia Wylie holds the center of the frame and the center of so many stories with so much wit and wisdom and just wicked talent that we were all really excited to elevate her and allow her to take that central role,” said Federle.

Federle goes on to say that Wylie leaned into her new role as leading lady by partnering with the show’s costume designer to “soften” her character’s look and go for “a lighter, more pastel color palette.” This, all in an effort to crank up rom-com tropes that typically anchor a show such as HSMTMTS.

In addition to her new role as leading lady in HSMTMTS, Wylie is also starring in the upcoming fantasy film The School for Good and Evil. The movie is based on the novel of the same name by Soman Chainani, and follows Wylie’s character Agatha as she and her best friend Sophie (Sophia Anne Caruso) get kidnapped and taken to the School for Good and Evil where they must figure out a way home while keeping their friendship intact.

Wylie has a lot on her plate, not only taking up the mantle as leading lady of one of Disney Plus’ most popular shows, but also stepping in for a main character that is quite literally one of America’s biggest stars at the moment. Then again, Federle put it best when he said, “We’re not losing a daughter, we’re gaining a leading lady.”