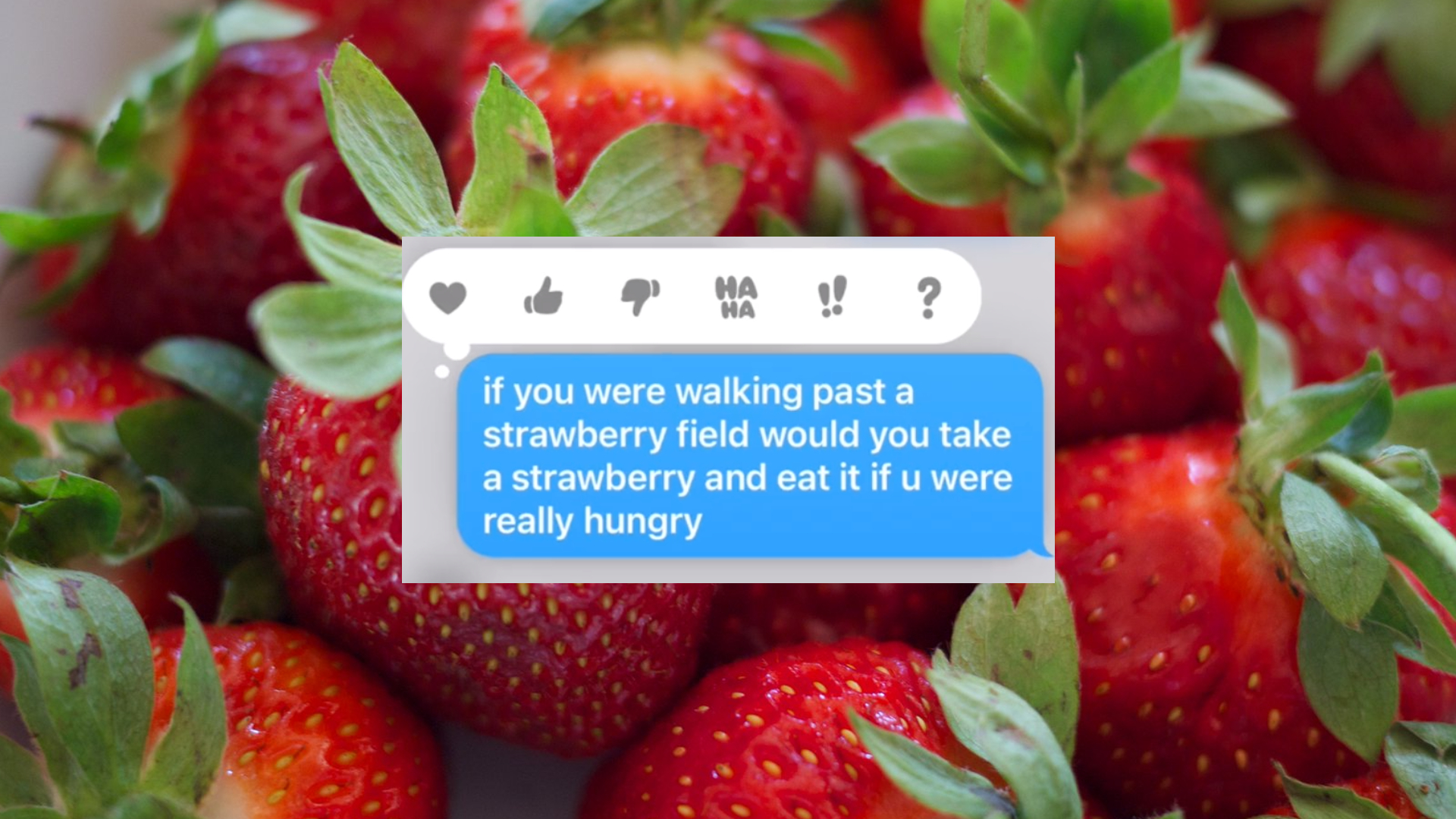 The women of TikTok are using a viral new quiz to test their boyfriends’ loyalty.

The “Strawberry Question,” as it’s being called online, is providing heaps of female TikTokers with the perfect opportunity to prank their boyfriends. There seems to be absolutely no way to get the exceedingly simple question right, which is a big part of the prank. Women across the app are seizing the chance to stump their boyfriends, flooding the app with hundreds of entries into the “Stawberry Question” TikTok trend.

The prank itself is pretty straightforward. Women ask their beaus a series of scripted questions, beginning with, “If you were walking past a strawberry field, would you take a strawberry and eat it if you were really hungry?”

Their partners’ responses to this question are extremely important. It’s exceedingly difficult to find a single dude who would refuse a fresh, handy strawberry while famished, as it turns out, which means that nearly every man responds to this question with some version of the word “Yes.”

In response to this, the tester pushes their partner a bit further, asking “How many” strawberries they would claim. The number here doesn’t matter quite as much and tends to vary widely. Some men are willing to relieve some poor farmer of only one or two of their hard-earned strawberries, while others are entirely prepared to walk away with handfuls of fresh, technically-not-free fruit. Regardless of the quantity of strawberries claimed, however, the prankster’s response is always the same.

The next portion of the prank poses a hypothetical physical challenge, wondering, “If there was a fence, would you jump it?” Many men say they would, particularly if they were “really hungry,” and maintain that they would claim at least one or two strawberries to satiate their hunger.

At this point, the true purpose behind the prank is revealed, as women proclaim that their partners are obvious cheaters. The strawberries are an allegory for other women, see, and by admitting that they’re willing to claim a few strawberries, the men are exposing themselves as future cheaters.

The trend is clearly a joke, one that heaps of women have been delighted to join in on. Many of the duped men seem amused by the end as well, though they all seem to wonder how, exactly, they managed to find themselves in trouble — jesting or otherwise — after answering a simple question.

Even a reversal in the face of a fence isn’t enough to save these poor suckers. Those who say they would claim a strawberry if it was easy, but balk at the mention of a fence, are still cheaters, according to the Strawberry Question. They just aren’t as willing to cheat if it’s going to be hard. Those strawberries still tempt, you see, and they did consider them before realizing that a fence stood between them.

In some videos taking part in the trend, another question is tacked onto the end. Another query, wondering “What if the farmer caught you,” occasionally follows the fence question and seems to place the prankster in the farmer’s shoes. So those men who are entirely willing to not only jump the fence for their strawberries but also explain themselves to the farmer are not only cheaters, but also willing to simply tell their partners that they did it because they were hungry.

Somehow, a small portion of viewers didn’t get the joke upon watching Strawberry Question videos. They lashed out at the women participating, empathizing with the “poor” men on the other side of the prank. Some commenters proclaimed that “this is why men stay single” and labeled the women as “crazy” and “dramatic.”

The majority of people were in on the joke, however, and shared their amusement in the comment sections of the trend’s many participating videos. Some even promised to try it out with their own partners.

While many men were simply confused by the end of their strawberry-flavored trial, a few punked their girlfriends in return. One man had a flawless response to his girlfriend’s accusation of cheating, sending back a video of him enjoying a strawberry that he snagged because he “passed a strawberry field” while hungry.

This is exactly the energy a prank like this deserves.