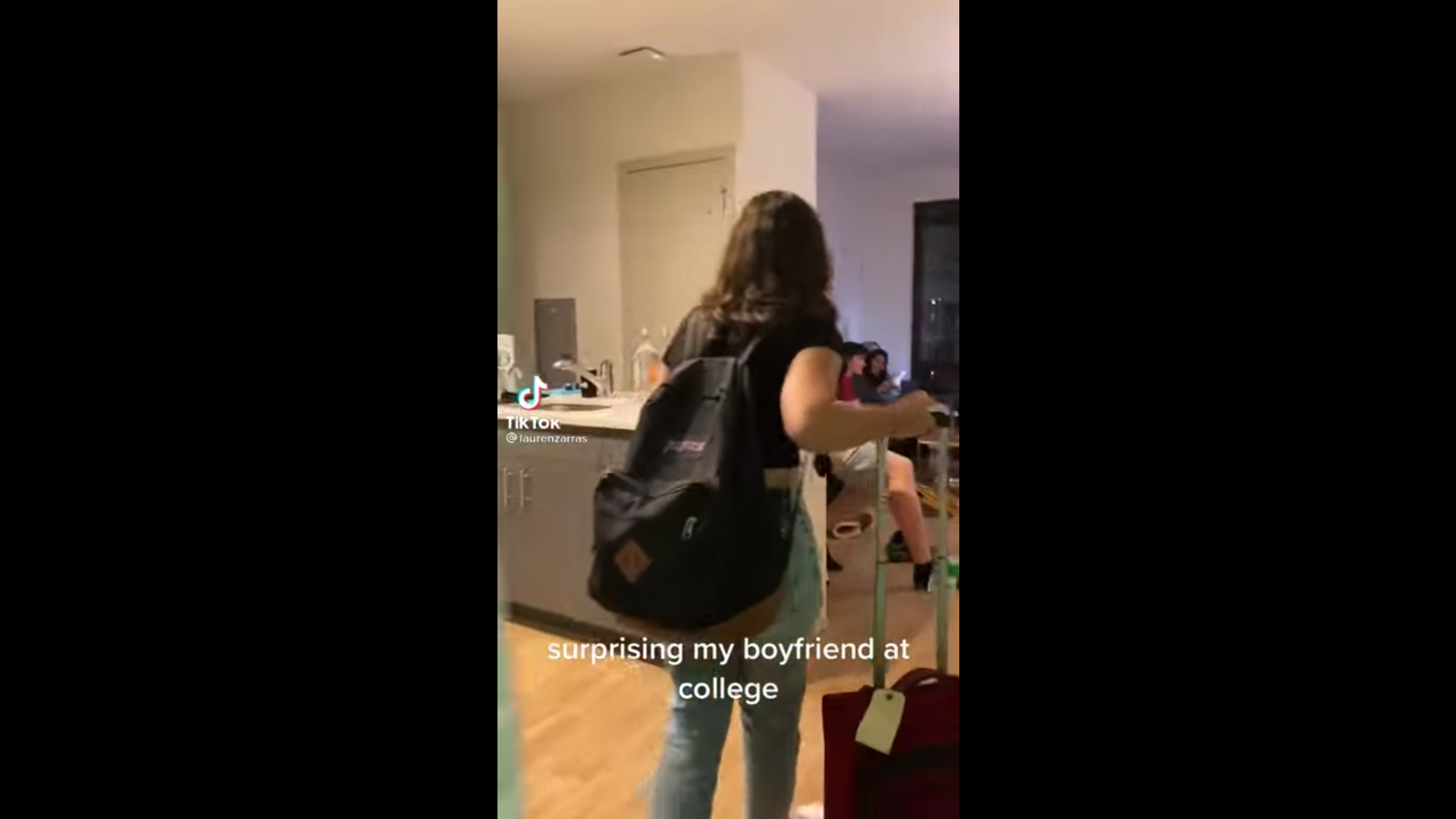 A video of a college student surprising her boyfriend at another college has gone mega-viral on TikTok.

It currently sits at 65 million views and has started countless debates about whether the boyfriend was excited enough to see her, or whether he’s secretly cheating on her because he’s sitting next to some other girls on the couch.

The video is by user @laurenzarras, a 20-something college student in a long-distance relationship with her boyfriend Robbie. The video has more than 5 million likes and 135k comments. It’s captioned “robbie had no idea” and Lauren uses the text “surprising my boyfriend at college.” It was posted in September.

Around the internet, it’s known as the “Teen on the Couch” video. So why has something seemingly so innocuous caused such a big sensation?

The main crux is that Robbie doesn’t seem to be that excited about seeing his girlfriend, leading many armchair sleuths to accuse him of cheating on her, especially since he’s sitting next to three girls on the couch.

A few eagle-eyed viewers said that the girl sitting next to him handed him a phone. In the video, Robbie leans forward and blocks the view of his hands, and then he suddenly has a phone. Basically, everyone thinks he’s being really shady.

Take a look at the video below.

Those 22 seconds lit the internet on fire and generated a ton of responses.

One Twitter user even started a poll as to whether they thought Robbie was on the up and up, calling it the “greatest political debate of our time.”

Comments on the video highlight the supposed awkwardness. “He hugged her like she was his aunt at Christmas dinner,” one user said. “3 girls 3 guys…sis you interrupted the party,” another said. “The girls look sus, the boys look amused, the boyfriend looks scared. Sis…please ask questions,” still another said.

Lauren herself was obviously forced to comment on the status of her relationship.

“Breaks my heart that people can watch a special moment and bring so much negativity. Please think before you assume anything about my relationship. As for the phone comment, his phone was in his lap. Thanks for the concerns though! And no I’m not in denial,” she wrote in the comments section.

Her boyfriend, who goes by the user name @souljawatchambassador, was also forced to comment. He made his own version of the video with the following:

“Couch guy here. Ur welcome for getting u off berries & cream TikTok (a previous trend), but remember: Not everything is true crime. Don’t be a parasocial creep. Go get some fresh air. Take care.”

The video has also inspired a slew of parodies using the same song – Ellie Goulding’s “Still Falling for You.”

For a lot of people, it’s all about the hug.

Here’s another one featuring some cute cats.

The attention hasn’t hurt Lauren at all. She seems to be taking everything in stride. She also has several other videos with more than one million views.