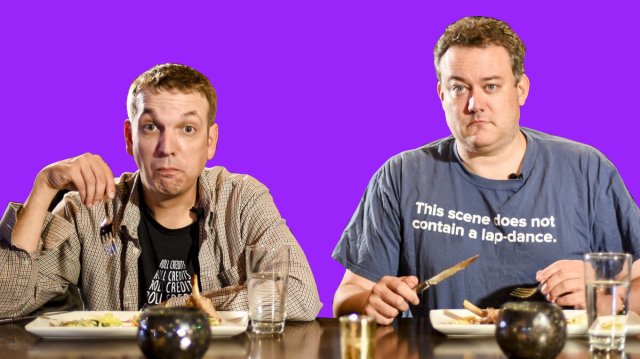 Image via Made In Network

In many ways, CinemaSins is the voice of the audience; the YouTube sensation puts into words everything we’re thinking but didn’t want to say aloud.

The channel was created by Chris Atkinson and Jeremy Scott, who told the Tennessean they developed their trademark humor while working at a Nashville area movie theater some 15 years ago. After the doors had closed on Thursday nights, the two would toss the upcoming releases on the projector and spend hours lambasting them.

“You end up every Thursday night watching one, two, maybe three,” Scott told the publication, “and the great majority of them are not good.”

For fans of their YouTube stylings, listening to them lampoon the worst that Hollywood has to offer is better than watching most of the movies themselves. Of course, the pair are not the first to make a living doing this. One of Comedy Central’s first hit shows was Mystery Science Theater 3000 with Joel Hodgson and his cast of puppets critiquing the most obscure and horrible movies ever made. In the same spirit, CinemaSins takes aim at some of Tinsel Town’s biggest blockbusters, and the results are often hilarious.

On that note, let’s take a look at the CinemaSins’ top-10 videos (plus one extra I had to include).

10. ‘Everything Wrong With The Amazing Spider-Man 2’

We’ll kickstart today’s list with the film Marvel fans love to hate, The Amazing Spider-Man 2. Talk about batting practice for Jeremy and Chris, this simply dreadful Spidey flick made a run at dethroning Spider-Man 3 as the most regrettable entry in the character’s live-action history. Not that it was following in the footsteps of greatness, but at least The Amazing Spider-Man had its bright spots. The highlight of TASM2 was Jamie Foxx’s weird combover, which tells you everything you need to know about the movie. With a sin tally of only 53, Spider-Man got off easy with this one.

9. ‘Everything Wrong with The Incredibles’

When it comes to CinemaSins’ top videos, the fans love when the duo spears superhero and/or animated Disney films. Here we have both rolled into one. Truth be known, I loved The Incredibles. Pixar did more for the Fantastic Four in one off-brand FF story than Fox did with three chances. Sometimes, listening to the duo brutally roast a good movie is more fun than their takedowns of despicable films’ it’s more challenging and makes for some creative barbs.

8. ‘Everything Wrong with Avengers: Infinity War’

CinemaSins, how could you? In my humble opinion, Infinity War is Marvel Studios’ greatest achievement in terms of dramatic storytelling with an ensemble cast. Then again, there’s no denying some of its flaws, and CinemaSins shines the spotlight on them. It’s all in good fun, and it’s impossible not to laugh even when it’s one of your favorite flicks.

7. ‘Everything Wrong with Suicide Squad’

In the race for the worst superhero movie of the past decade, it’s a dead heat between Suicide Squad and The Amazing Spider-Man 2. At least Suicide Squad had Margot Robbie’s spot-on portrayal of Harley Quinn, so it might be slightly easier to stomach. Then again, Jared Leto’s take on the Joker is worthy of 1,000 sins on its own, so the race is still a toss-up. CinemaSins didn’t let anything slide, either, and they took the film to task in the most hilarious of fashions.

6. ‘Everything Wrong with Tangled’

Another Disney feature-length cartoon on today’s list, CinemaSins said everything parents were thinking when they took their kids to see Tangled in theaters. If you found yourself questioning the tried-and-true Disney slapstick formula, you will appreciate this video. In fact, it’s been watched some 18 million times in the seven years since it was uploaded. The two actual Tangled trailers have a combined 9.7 million views. To be fair, that was 12 years ago, and social media and YouTube have grown tremendously in that time. At any rate, this is a gem in the CinemaSins collection.

5. ‘Everything Wrong with Big Hero 6’

Another Disney movie made the hit list, and this time Pixar was in the CinemaSins crosshairs. The Pixar crew’s second stab at a superhero kids movie was a hit with audiences, and its emotional core resonated both with children and adults. Still, there’s no denying some of the sillier aspects of the plot and characters. Plus, being a kids’ movie, there are enough leaps in logic that it gives CinemaSins plenty of ammunition for its arsenal of quips and zingers.

If you haven’t noticed, the 21st Century is marked by calls of the world coming to an end. There was Y2k when society was supposed to crumble into a Mad Max movie because our computers weren’t programmed to change the date to Jan. 1, 2000. Then came the theories that the Mayans’ ancient calendar foretold of an impending global disaster in 2012, hence the movie title. Let’s not even talk about 2020 cosplaying as Stephen King’s The Stand.

Banking on public fear to drive 2012 to box office glory, this John Cusack thriller (that was less than thrilling) was more along the lines of a biblical flood, only there wasn’t an old man collecting animals in a boat. In what amounted to two hours of bad CGI carnage with an even worse plot, there is ample material for a comedy bit. Fortunately for us, CinemaSins answered the call.

3. ‘Everything Wrong with Frozen’

Were you tormented by small children screaming, “Let it go! Let it gooooo!” at the tops of their lungs for the past 10 years? You might be eligible for compensation in the form of “Everything Wrong with Frozen.” As popular as the movie and its oh-so-catchy soundtrack remains, there’s so much about Frozen that is just so disturbingly chipper and pleasant. There’s also plenty of it that simply makes no sense.

Speaking of letting it go, if you’re a parent watching this with your kids, you know the willpower it takes to hold back every sarcastic thought for an hour and a half. Luckily, CinemaSins does the work for you and says all the vulgar, smart-ass things you wanted to spay in front of young children but thought better of it.

2. ‘Everything Wrong with 50 Shades of Gray’

When Chris and Jeremy slap a movie with approaching eight million sins, you know watching this was pure torture. At the same time, that means their “Everything Wrong with…” will be solid entertainment. They were harsh critics on 50 Shades, especially compared to Frozen’s 96 sins, so…damn.

In many ways, this is the lowest-hanging fruit. Much has been written about the atrocious film adaptations of the popular novels. Fans of the books were disappointed with the end result and vocal about their displeasure. That being said, it makes for good CinemaSins content, and viewers turned to the duo to rip it to shreds in epic fashion. So far, the video has 24 million views.

1. ‘Everything Wrong with CinemaSins’

Not above skewering themselves, Jeremy and Chris dedicated a video to poking fun at their own channel, though at 3:45, it was a bit shorter than their average take (you can’t be too hard on yourself, right?). Fans responded with an outpouring of love in the form of millions of clicks and views. Uploaded back in 2009, “Everything Wrong with CinemaSins” has earned the brothers an amazing 30 million views and counting.

Honorable mention: ‘Everything Wrong with The Snowman’

Of all CinemaSins videos, this one gets lost in the shuffle, but it is a hidden comedy gem of the highest caliber. They brought their A-game to this horrible film. So far, it’s been watched 728,360 times, which is meager compared to the others on today’s list. Still, I wager that more people have seen this CinemaSins video than the actual Snowman movie.

If nothing else, The Snowman confirms that for all his overwhelming talent, Michael Fassbender will take any role. His turn as Harry Hole (yep, that’s his name in this stinker) will make you put on the rose-colored glasses and take a second look at Assassin’s Creed. Boy, does CinemaSins have fun with that layup of a character name.

Trust me, you’ll want to control your ADHD long enough to get to the bonus round at the end. The pair give a tally for the number of shots filmed through a window complete with Super Mario Bros. coin-collecting sound effects. Before YouTube cracked down on the use of unlicensed music, this was perfectly timed to the beat of “Through the Window” and it was glorious. For those who saw the original edition, here’s to the good ol’ days.