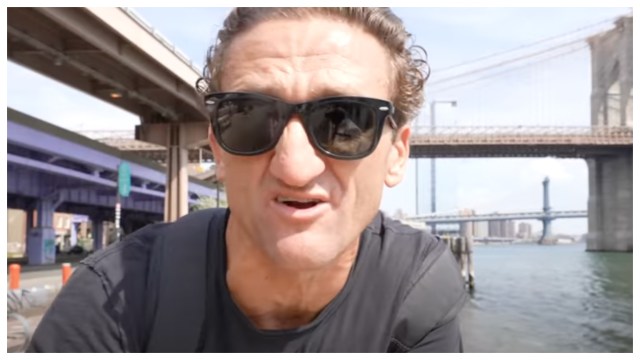 The Wizard of Oz taught us there is no place like home. What is home exactly? A feeling, a memory, or simply a place to rest  your head at night? These are the questions Casey Neistat recently pondered when deciding where he and his family should live. Casey is a popular filmmaker and YouTuber who moved back to NYC but before we get into that let’s take a look at his life and career.

Casey was born in Gales Ferry, Connecticut. He has two brothers Van and Dean.  He was a rebellious young person who chose to forge his own path instead of following the crowd. He dropped out of high school when he was 16 years old. He moved to Mystic, Connecticut and had a son with his then girlfriend Robin Harris. He was happy working in a seafood restaurant and living in a trailer with his family until Robin dumped him.

Still reeling from his break up, he went to visit his brother Van in New York City. Van had just purchased a new Mac computer and video camera. Casey and Van recorded videos about their adventures around New York City. Casey realized this was exactly what he wanted to do with his life and “gave up his middle class security” and moved to New York.

One of Casey and Von’s first big breaks was working with artist Tom Sachs. They did a series of films about his sculptures and installations. It was a big deal for the brothers.

The brother’s next project was inspired by their frustration with their iPod. In 2003 when their 18 month old iPod’s battery died, Apple support told them it would be $255 to replace it. This was about the same price as just buying a new one. The brothers decided to create a video called “iPod’s Dirty Secret” about this injustice and post it on the internet. It went viral before that was even a term. The video caught the attention of media outlets such as The Washington Post which called it  “wonderfully renegade.” The video created changed as well. Shortly after the video was posted, Apple announced a battery replacement program and an extended warranty though they deny it was because of Casey and Von’s video.

In 2008 HBO purchased a television show from the brothers for 2 million dollars. The Neistat Brothers was autobiographical and was made up of first person stories and home videos.

Casey began sharing content on YouTube in 2010. In 2015 he started posting daily vlogs about his personal life in New York City. Viewers loved watching him skateboard through the city. He even snowboarded the streets when there was a blizzard. Casey’s easy going attitude combined with his innovative filmmaking and prolific content made him synonymous with YouTube.

In 2019 Casey and his family moved from New York City to Los Angeles. Casey is married to Candice Pool. They share two daughters named Francine and Georgie. They made the move to slow down and spend more time with each other.

Casey visited NYC in June of 2021 and posted a video about it. Viewers could see how much he missed the city. He was in Connecticut to see his dad who had a serious operation. After it was clear his dad was going to make a full recovery, he visited his old stomping grounds.

In September of 2022 Casey announced on his YouTube channel that he and his family moved back to NYC. “It was less that we didn’t like it in California and much more so that we realize how much we love it in New York City. And how much we miss it here in New York City,” Casey states. He adds, “And not just Candice and I, the kids too.”

Casey goes on to explain that they did well in Los Angeles and made friends but they could not shake a longing for New York City. When Covid hit, it was hard to watch the city go through such a profound moment and not be a part of it. Casey had been there through many big moments such as 9/11 and to not be there for the pandemic felt wrong.

To Casey, living in New York City feels like Christmas morning every day. He is so excited to be back in his creative offices which he has been working out of for 20 years. Candice even moved in the same office building just one flight up.

Casey concludes the video with the real reason his family moved back to New York City. He looks up the dictionary definition of the word muse and reveals that New York City is his. His “personified force that is a source of inspiration.” For Casey home is where you feel inspired. Home is a muse.