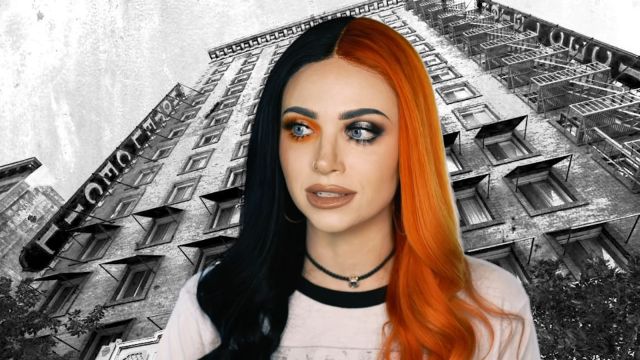 This past Thursday, YouTube royalty Glam&Gore‘s Mykie has graced her fans yet again with the beloved introduction ‘Hyello, Zombaes!’After more than two years since her last update on the FX and glam makeup channel, the comedy and ghost-hunting YouTuber finally uploaded a long-awaited video, taking fans of the channel by surprise with an unexpected upload and a new intro song where she announced “I’m back.”

In the video titled “My boyfriend takes off my….makeup,” Mykie is accompanied by her boyfriend and old-time YouTuber Anthony Padilla — previously known for being the founder of SMOSH — and her longtime friend and videographer Peter Macaluso. Emulating the 2019 video in which Mykie takes off Padilla’s makeup as a boyfriend reveal, the duo returned to the small screen as a couple while updating fans on the lingering questions left in 2020 regarding the makeup guru’s sudden disappearance.

Why did Mykie take two years off of YouTube?

In the last video posted by Mykie back in 2020, the YouTuber shared her struggles with some physical pain around her neck and throat areas, unbeknownst to the impending doom facing her future in the upcoming two years. Later that same year, Mykie would update her fans via Instagram stories, where she shared her constant visits to the doctor, trying to find the source of her mysterious neck discomfort and semi-arm paralysis – but to no avail.

In the 29-minute-long comeback video, Mykie starts off by explaining that the mysterious chronic aches had been causing her ongoing anxiety – to the point where in the last two videos recorded back in September 2020, her condition got so weakened that her throat would get “swollen shut.”

The pain would then extend to her entire body and as she put it, from”the top of [her] back to [her] feet [she] had different symptoms and different types of pain.” She also said she stopped counting her symptoms at around fifty-eight occurrences. The constant mysteriously sourced aches caused the YouTuber to go to over 20 doctors over the following months, even though she expected to be done with the visits within a month.

In those desperate months when Mykie visited doctors and specialists alike, the 32-year-old admitted to getting over a dozen diagnoses, some of which were incurable, including POTS, HEDS, and fibromyalgia. Unfortunately, the incessant diagnoses and even surgery scares would prove to be a situation where they took one step forward and two steps back. The duo admitted that figuring out a problem one by one was even more anxiety-inducing, as it seemed as if nothing explained the combination of issues happening at the same time. The YouTuber went on to admit that the one diagnosis that finally made sense was “massive nervous system dysregulation.”

“I had no idea that if you trigger your nervous system and then it gets stuck in a state of fight, flight, or freeze, it can cause problems with so many different areas because your nervous system controls so much sh-t. It controls how you breathe, how you digest things, how you sleep, your perception of pain, and stuff like that, so it just messed up everything.”

The FX makeup artist also shared a few other instances that set back her return to YouTube, including an incident in which both her dogs nearly died from eating Yew, a common poisonous plant for dogs, and even a cancer scare. Between all the recovery treatments and diagnoses, Mykie’s “one-month break” would quickly turn into two years without uploading on her channel, coming back without pain and physically and mentally stronger than ever.

Some fans feared the return video to be a one-time deal, but Mykie assured that she is back for good… with a few conditions. Unlike the years prior to 2020, the YouTuber admitted her post schedule would be slightly different, as she would no longer post videos on a weekly basis as she had done in the past. From here on out, the LA-based artist will take longer to produce her content as she will be focusing on making videos that she “really wants to do,” rather than succumbing to the pressure of weekly video schedules.

As for the future content of the channel, all that is known is that her previous Ghost-Hunting series that took place in October will now extend for the entire year, with the next video looming near the end of the month. Mykie is now officially back to her life as a ghost-hunting makeup guru alongside her friends and partner, while still pursuing her lifelong dream of directing and writing a horror film.