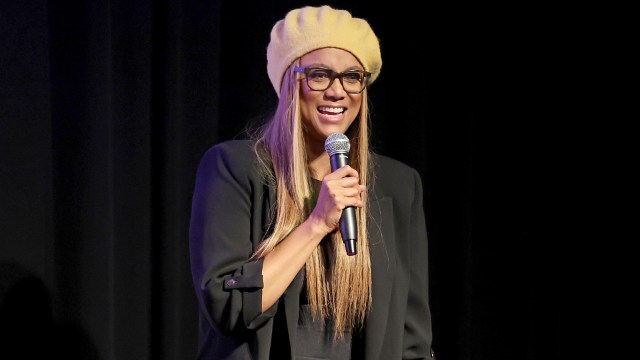 Celebrity chef Rachel Hargrove has appeared on seasons 8 and 9 of Bravo’s reality series Below Deck, which chronicles the lives of the crew members who work and reside aboard a superyacht during charter season. Hargrove’s first taste of reality fame, however, came when she auditioned for America’s Next Top Model in 2005.

Unfortunately, it seems as though the brief experience (Hargrove didn’t make it past on-camera auditions) apparently wasn’t a great one, as the 39-year-old lashed out at Top Model host Tyra Banks on Twitter this week, 17 years after the fact, for insinuating that she was “plus-sized.”

“Hey Tyra Banks, remember when you called me a plus size model when I was a size two?” Hargrove tweeted on Thursday, along with a somewhat unflattering photo of Banks, who currently hosts Dancing with the Stars alongside Alfonso Ribeiro.

Hargrove’s tweet quickly went viral, as everyone piled on with takes. Words hurt, obviously, and clearly, those comments have stuck with her nearly two decades years later. But it also goes without saying that two wrongs don’t make a right, and fat shaming Banks in a mean-spirited way on Twitter is quite different than comments that were made during a reality model competition that she willingly signed up for.

As such, one user brought up that as a retired model, Banks can be any size she wants. “Also, after all these years, you’re still mad that Tyra told you the weight standard in the toxic industry you wanted to be part of?” they added.

Others brought receipts and pointed out that it wasn’t actually Banks who made the comment but judge J. Alexander.

Many pointed to the industry as being to blame, not Banks, for the toxicity that Hargrove (and countless others) experienced.

Although at least one person thinks that excuse is a cop-out.

A few people also defended Hargrove, recalling that Banks was a menace to the young women who appeared on the show. Clearly, this is a sensitive and convoluted issue without a right or wrong answer!

Hargrove opened up about her experience on America’s Next Top Model in an interview with Entertainment Tonight in January of 2021, and at the time, she seemed to have made her peace with it.

“Oh, yeah! That happened. That was so much fun! I was bartending and the casting director came up to me and [said], you know, um, ‘Excuse me, have you ever thought about being a model?’ And I thought, are you f**king high?’ I’m slinging drinks and I’m a kitchen creature, so it wasn’t like, it wasn’t one of those things where I was like, hey, I’m gonna go stand there at this cattle call, but it was kinda cool. They just kind of brought me through, I think it had to do with my personality being just off the wall, so… I don’t know! It was a lot of fun, it was a lot of fun.

“Tyra’s interesting. The whole experience kinda gave me an idea of what reality TV might become.”

Hopefully, Hargrove is finally able to move past her Top Model experience, or else Tyra might have to start paying rent for taking up so much real estate in her head.