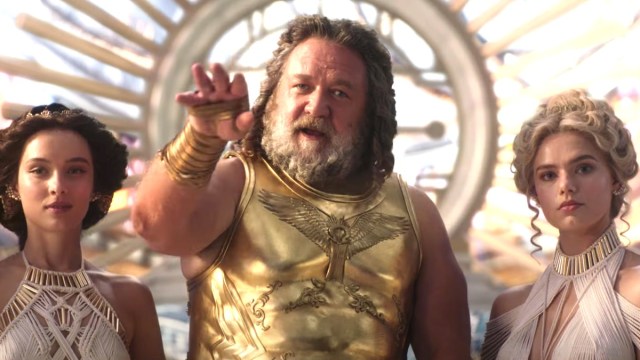 We’re not sure if Russell Crowe likes that his most memorable part of Thor: Love and Thunder is exposing Thor’s parts, but Chris Hemsworth and Taika Waititi certainly do.

In a conversation with Studio 10, Hemsworth, the star of Love and Thunder, and Waititi, the writer/director/supporting actor, joked that Crowe only did the film to strip Hemsworth naked.

“It was a dream of his,” said Hemsworth. “He said, “I’ll do it, if he does this [gets naked].” Hemsworth then mimicked the flicking motion that Zeus, Russell’s character, does that disrobes Thor and exposes his cheeks, giving the MCU its first ever glimpse of nudity.

Waititi did his best Crowe impression to recall how the legendary actor (fictionally) responded to the job offer: “Make sure we flick him, you know. We’ll tie him up and then we’ll flick [his] pants off.”

Of course, their jokes are buttressed with tons of respect for the Gladiator actor. “I’m such a fan. I have been since I first started acting,” Hemsworth said of Crowe to Disney Channel (as transcribed by FandomWire). “There’s such a weight and a seriousness to his performances and to him, as an individual, from afar. But meeting him, he has a great sense of humor and did whatever Taika asked on set, which was mind-blowing.” To Entertainment Weekly, Waititi called Crowe a “friend” and a “really amazing actor.”

You won’t have to wait long to see acting phenom Russell Crowe disrobe anatomical phenom Chris Hemsworth in Thor: Love and Thunder, as the film will arrive in theaters on July 8.