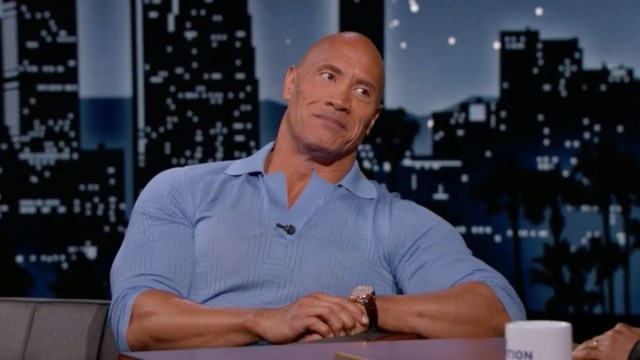 Kevin Hart and Dwayne “The Rock” Johnson have been hitting the promotional circuit as a double act, promoting the latest film that they’ve starred in together, DC’s League of Super Pets. The two seem to enjoy working together, also appearing in the action comedy Central Intelligence, the two Jumanji reboot films, and with Hart even popping up in The Rock’s Fast and Furious spin-off, Hobbs & Shaw.

But you don’t get to the top of the A-list if you fully enjoy sharing the spotlight, so it’s no surprise that the two natural competitors have been playing up the frenemy aspect of their relationship on the promo circuit, which includes indulging in the TikTok trend “tortilla challenge,” which involves the two slapping each other silly with tortillas. All of which made it no surprise when The Rock sat down solo with Kerry Washington, guest-hosting on ABC chat show Jimmy Kimmel Live!, and took the opportunity to take a jab at Kevin Hart’s outgoing personality:

It begins with The Rock talking about how much he loves working with Hart, followed by Washington setting him up by asking, “But who gets more attention when you’re out in public together?” The Rock takes a moment to acknowledge someone in the audience and scratch his chin, before responding:

“It would be Kevin. Because he’s so loud and obnoxious, every room he comes into… You know how it is. You know Kevin, right?”

Washington acknowledged she does know Kevin Hart, and The Rock then launched into an impression: “Hey hey guys, I’m here, look at me.” Followed by him pretending to jab at a tiny person with an elbow, saying, “Shut up.”