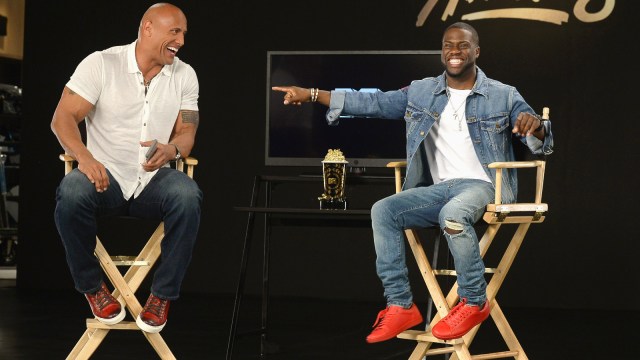 What’s between The Rock and a Hart place?

Some cheese for sure, a bit of snark, some awkward eye contact, hearty laughs, ribbing, joking, and of course, camaraderie.

Though their partnership in film has only spanned a little more than half a decade and a handful of films, Dwayne (do we still need to do the whole “The Rock” thing?) Johnson and Kevin Hart have shown a chemistry on screen that fans seem to truly enjoy.

It could be that Johnson has an allure all his own anyway, and Hart knows how to draw in gobs of fans — and that’s what makes their pairing so natural (or a moneymaker).

Or it could be that they’ve only scratched the surface on what could become of two of the hardest working people in Hollywood when they put their stature and stardom together.

In reality, they’ve only been buddy-buddy for real in three movies — two of those being jungle-themed.

Yet after this year, they will have appeared in five total movies together, with a sixth on the slate, and maybe more.

What does the world think of the two teaming up so far?

According to box office receipts, the feeling are pretty favorable.

Let’s run through all the Kevin Hart and The Rock movies, ranked, of course.

It’s a Johnson-led film with merely a cameo from Hart. Though it’s a good one — being that the movie isn’t centered around the two — for this ranking, it has to come in last, regardless.

You do get the dual joy of having Ryan Reynolds pop up alongside Hart in their cameos.

We have Reynolds playing CIA agent Victory Locke as well as Hart as Air Marshall Dinkley, and couldn’t you just mix and match those two along with Johnson and have about a 72% success rate? (Remember, Reynolds and Johnson starred in Netflix’s Red Notice, which didn’t receive great critical acclaim yet somehow shot up the ranks of streaming viewership all the same).

The pretty successful sequel to the ultra-successful reboot/sequel.

As Central Intelligence did, the movie relies way too much on the audience just liking Hart and Johnson (as well as Jack Black and Karen Gillan). Sure, it’s a safe bet, as the first Jumanji flm featuring the foursome was fun and made boatloads of money.

However, the classic pitfall of sequels befalls this film as well, without enough originality, storyline, and the general lack of things to truly care about making you walk away from the movie not disappointed, but not impressed.

All the bits for a sequel are here from famous side characters and cameos (Danny Glover, Rhys Darby, Colin Hanks, Danny DeVito) to rehashing setups from the first film.

You could do worse than popping this on brainlessly to stream when you don’t want to cycle through the recommended lists anymore, but you could (and they could) do better.

Then again, the movie made three-quarters of a billion dollars ($800M+) and a third film with this cast is already in the works.

We sometimes forget that laughs plus special effects with a side of emotion are plenty enough for a full watch these days and throughout the decades, that hasn’t gone out of style. Isn’t that the whole premise of Top Gun: Maverick anyway?

Hopefully they work on bringing something else to life rather than a third helping of what we already had (*cough* Jurassic World: Dominion *cough*).

A little Hart and a big Johnson.

Literally, the tagline on the poster goes as tongue-in-cheek as possible while stating the literal stature of the two stars.

So the stars don’t come up with the movie poster tagline, but still, their first movie together laid the groundwork for their collaborations yet to come.

You’d hope the premise goes beyond that, but, it’s about what you expect.

Take two guys who get along and buddy cop them up.

Whenever a movie quadruples its budget, it catches attention (mostly from the ones making the money), with Central Intelligence sporting a budget of $50 million while earning more than $215 million worldwide.

You get fans of Hart drawn in, you get Johnson’s immense audience brought into the fray, and boom — it’s a hit.

That’s the problem, though.

With a better script, better direction, better cinematography, creativity, and so on and so forth, this movie goes from solid to incredible.

However, they still rely way too much on the duo’s chemistry to bring things home instead of plotting anything resembling a great script and storyline.

The level of self-deprecation and wit both actors have — and their ability to bring humor to great scenes — isn’t really to be found here.

You’ll laugh, and enjoy the film, but you won’t come away from it with memorable scenes from a great team up, as you do in something like Step Brothers.

Sometimes, it pays to just play the hits and tune out, I suppose.

It shows something in this day and age of any remotely successful film that spawns a sequel when it hasn’t been marked for a part two, because the promise of what this could have been is what makes it fall so short.

If you can set aside expectations, and you enjoy a little Hart or a big Johnson, then for sure this is worth a go.

Technically the sequel to the original Robin Williams venture, but something totally different: the rare reboot and sequel all in one.

It’s tough to say if this movie is great because we didn’t see it coming or if it’s just great because it’s actually a super solid movie.

People behaving strangely because they’ve inhabited a different body or form or avatar is golden humor. Body switching movies have spanned decades now, and this takes it over the top thanks to a crew who can do just that.

We get the “original” foursome as their high school selves and the four actors take great care to embody those traits and mannerisms, while taking them to another level.

Maybe Face/Off 2 can do some sort of virtual face swapping and pull off the same effect?

In Welcome to the Jungle, Black, Hart, Gillan, and Johnson all do their characters and their avatar characters great justice here.

It just about made a cool billion worldwide, getting all the way to $962 million, so no wonder it’s a soon-to-be reboot trilogy.

Johnson gets to be strong yet sensitive, humorous and caring, which is basically the pillars of his characters in nearly every film.

Hart gets to be funny, insightful, awkward, on the verge of cringeworthy but somehow never getting there, and passionate. Again, kinda like the Hart we successfully see in many of his movies, too.

Add them together with the zany and heartfelt Black doing his thing and Gillan perfectly playing shyness in one vain and a newfound extrovert in another and you’ve got yourself a hit.

Later this year we get both actors as the main bill in DC League of Super-Pets. The poster only boasts Hart and Johnson at the top and though we won’t get them on the screen, both have experience doing great work with animation and voiceover — Hart in The Secret Life of Pets and Captain Underpants, and Johnson in Moana.

Johnson is playing Superman’s dog, Krypto, and Hart will be Batman’s dog, Ace, which already seems like a better premise than Batman vs. Superman: Dawn of Justice wound up being.

Even with the two taking top billing, the movie doesn’t lack in its supporting cast with Keanu Reeves, Natasha Lyonne, Thomas Middleditch, Kate McKinnon, Ben Schwartz, John Krasinski, and Vanessa Bayer all part of the crew too.

After that, we’ll most likely see them pairing up again in a third Jumanji film.

For those that watched both Jumanji’s, the scene during the credits of The Next Level set us up for the next film to come and for the cast to expand. Audiences are even in for a treat with some call-backs or crossovers with the original film starring Robin Williams.

Perhaps both Hart and Johnson will learn what they truly have beyond just improvising and getting to be in the same film together and can take a project to a new level — one that brings about the unique quality bubbling just below the surface in all the films above.