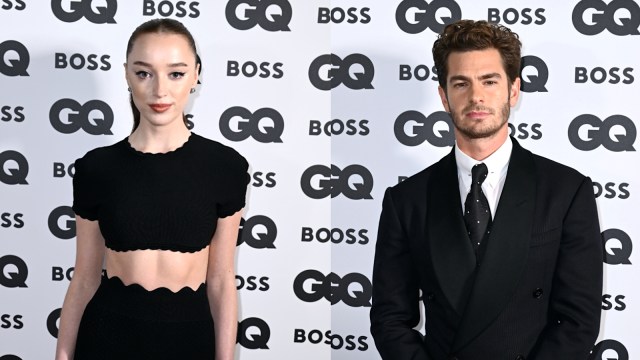 It’s been a whirlwind of a couple of years for Andrew Garfield.

After his breakout performance in Tick, Tick… Boom! and The Eyes of Tammy Faye, as well as his surprise role in Spider-Man: No Way Home, Garfield is enjoying a period of rest and relaxation with almost no immediate plans to get back to work. “I’m in a real period of not-doing,” he told British GQ in early Nov. “The usual aggressive, ambitious, driven heartbeat, rapping at the door has subsided for a while.”

What better time to enter into a new relationship, wouldn’t you say? The 39-year-old actor is now reportedly dating Bridgerton star Phoebe Dynevor, according to The Sun. However, in keeping with his preference to steer his relationships away from the spotlight, he has not commented on this new turn of events, although it’s clear he and Dynevor are more than just friends.

When did Andrew Garfield and Phoebe Dynevor meet and how long have they been together?

Andrew Garfield and Phoebe Dynevor officially cozied up with one another at the GQ Man of the Year Awards in mid-Nov, although they reportedly already knew each other through “various acquaintances,” according to The Sun. Cameras were not able to snag a photo of the pair neither at the event nor at the after-party they attended (and left) together.

Garfield broke up with model and singer Alyssa Miller earlier this year in April, citing “busy schedules” as the reason for their split. They were together for several months, meeting in 2021. Before that, Garfield was intertwined with fellow Hollywood A-lister Emma Stone, as well as singer Rita Ora, model Christine Gabel, and actress Shannon Woodward.

All of his relationships have remained relatively low-key in the eyes of the public, which explains why any cameras did not catch him and Dynevor at the GQ Man of the Year Awards, and why neither has addressed the rumors yet. For her part, Dynevor did post to Instagram photos of herself on the red carpet, but Garfield was noticeably absent from them.

It’s too early to tell whether this new pairing will morph into a full-blown relationship, but we can dream. Either way, it’ll likely be a while before Garfield himself addresses the rumors, if at all. If that’s the case, we’ll keep our eyes peeled for more juicy information from Dynevor, who, unlike Garfield, is very active on her social media channels.