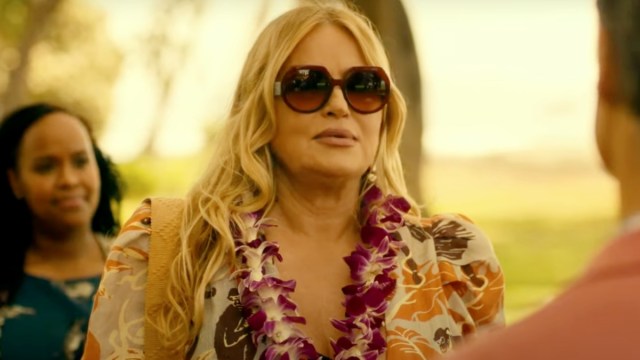 Much ado has been made about Jennifer Coolidge very deservedly winning her first Emmy for HBO’s The White Lotus, and for good reason. The 61-year-old comedic actress has been a staple of TV and film for nearly three decades, though usually in smaller roles that stole the spotlight in whatever scant amount of screen time she was given.

That all changed when The White Lotus writer and director Mike White wrote the part of Tanya McQuoid with Coolidge specifically in mind, giving her a long overdue spotlight and the second act to her career. But Coolidge very nearly turned down the role!

White began writing The White Lotus during the lockdown part of the pandemic, and at the time — like many of us — Coolidge was not feeling her best self. In an interview with Variety earlier this summer, she explained how a friend convinced her to take the role.

But her tendency to consider things from every angle while others simply follow the script can weigh heavily. Coolidge almost talked herself out of “The White Lotus,” even though her friend White had written the part for her. Depressed at the height of COVID and feeling unready to work, she had to be persuaded to join the cast by “a really smart, savvy, very blunt friend.”

“I didn’t like the way I looked,” she says with a trademark understanding of her own sensitivities, and a willingness to poke at them. “But did I change it for The White Lotus 2? No! I didn’t change anything!”

Apparently this was news to White, who only later learned of his muse’s trepidation.

White says he became aware of Coolidge’s hesitancy only after reading about it in the press. “There’s times where she disappears, and you’re like, ‘Is there meaning behind this or is this just her?’” he says. “But there was just no way she was ever going to say no, because I would have forced her by her hair. The reason I was doing this was to do it with her.”

Well, thank goodness he didn’t have to drag her by the hair. Not only would viewers have been robbed of Coolidge’s stellar performance — she’s also the only cast member to return for The White Lotus: Sicily — but she would have never received her career milestone on Monday night.

“I just wanna say, I took a lavender bath tonight, right before the show, and it made me swell up inside my dress, and uh, I’m having a hard time speaking,” Coolidge said, laughing, while accepting her Emmy for Outstanding Supporting Actress in a Limited Series.

“Wait no hold on, this is a once in a lifetime thing, and I’m full, I’m full,” she pleaded, after the ceremony’s producers rudely began to play her off the stage with music, before defiantly dancing to a rendition of “Hit the Road Jack.”

We love to see it — and with the highly-anticipated second season of The White Lotus on the way, maybe it won’t be a once in a lifetime thing after all.