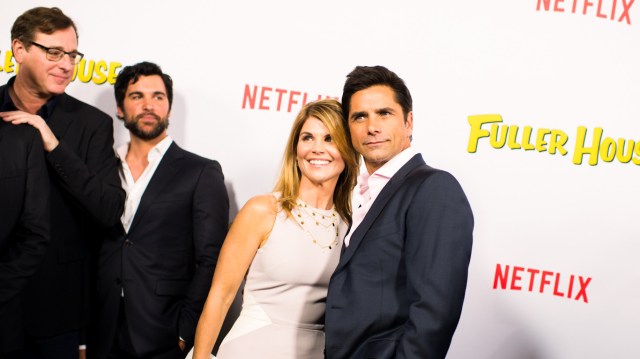 Appearing as this week’s guest on Dax Shepard’s podcast Armchair Expert, John Stamos fiercely defended his former Full House co-star against those who verbally attacked her for her role in the 2019 college admissions bribery scandal.

Loughlin and her husband paid a large sum of money to William Rick Singer, founder of the Edge College & Career Network. Singer used his company and his clients’ money to bribe school officials and, in this case, he helped Loughlin’s daughter get into USC.

Lori pled guilty to one count of conspiracy to commit wire and mail fraud and was sentenced in 2020 to two months in prison, fined $150,000, and ordered to serve 100 hours of community service. Her husband, Mossimo Giannulli, played a more significant role and thus served 5 months in prison and was ordered to pay $250,000 while having to do 200 hours of community service.

Stamos admitted to being stunned by the news and to having a difficult time wrapping his head around his long-time friend’s role in the scandal. Loughlin herself was demonized on social media and her “America’s sweetheart” tag was suddenly stained.

Loughlin served her time and her community service, paid her fine, and stated she was ready to get the past behind her. However, her potential reception back into Hollywood has been lukewarm, though she will star in the upcoming TV movie Fall Into Winter. The movie is a from the Great American Family network, which has been in the news lately for admitting that it intends to focus on traditional marriage, suggesting that same-sex marriage will not be explored. Such comments were originally expressed by Candace Cameron Bure who is a producer and actor for the network and who also co-starred with Loughlin on Full House.

Bure’s comments then received harsh criticism from JoJo Siwa and others, though Bure and Great American Family have stood firm in their intent.

Dax Shepard mentioned to John Stamos that he recalled Stamos expressing how he hates when people get mad at him for defending Loughlin, especially considering that Lori is a great person. Stamos replied, “She also paid a lot of money. She set up a college fund for kids and she went to fu**in jail, man!”

Stamos added that he received permission from Loughlin to say, “She wasn’t really the architect of it. She was way in the background. She didn’t know what was going on.”

It’s indisputable that Loughlin has paid her dues. Fall Into Winter will premiere in January so maybe then we will see if the general public has accepted her back and, more so, whether they have forgiven her.