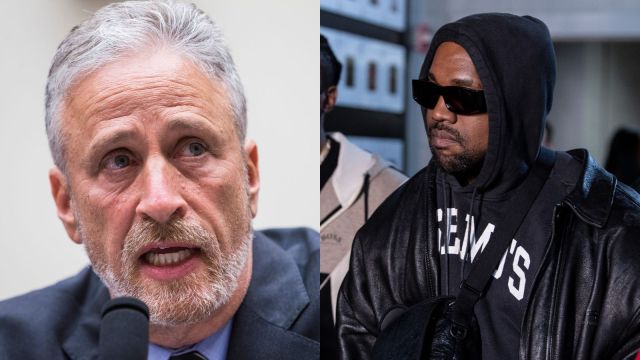 Stewart, who is Jewish, was initially asked by Colbert about the punishment handed down on Irving, who retweeted a post featuring a movie that reviews called antisemitic. Irving, who plays for the NBA’s Brooklyn Nets, was suspended for five games and has to attend sensitivity training, as well as making a public apology to the media because he refused to admit to a reporter that his retweet was promoting antisemitism.

Stewart thought the punishment was unnecessary, claiming it doesn’t really solve anything, before he joked that Irving’s punishment should really be that he has to be traded to the Knicks.

“Penalizing somebody for having a thought,” Stewart told Colbert, “I don’t think is the way to change their minds or gain understanding.”

Stewart went to say that Irving is a grown man, and it’s foolish to react by basically trying to put a grown man into a timeout. He added, “Naming things as antisemitism is as reductive as some of the things they might be saying. It immediately shuts down a conversation.”

The former host of The Daily Show, and current host of The Problem with Jon Stewart, went on to call the media’s response “arsenic conflict.” He clarified to Colbert, who formerly worked with Stewart on The Daily Show, that he didn’t enjoy hearing Ye’s comments, but still feels that a conversation is a greater need than a punishment.

“If I can’t say that’s bullsh*t and explain why then where do we go? If we all just shut it down then we retreat to our little corners of misinformation and it metastasizes and the whole point of all this is to not let it metastasize and to get it out in the air and talk about it.”

Despite being Jewish, Stewart explained that he’s often called antisemitic because he’s against Israel’s treatment of Palestinians. He noted that he’s also called other non-favorable things from other people, but that many of those reactions he receives are just designed to not allow a debate, before offering another example to the Colbert crowd.

“Look at it from a black perspective. It’s a culture that feels that its wealth has been extracted by different groups. Whether it’s true or not isn’t the issue – that’s the feeling in that community – and if you don’t understand that that’s where it’s coming from then you can’t deal with it and you can’t sit down and explain.”

Finally, Stewart spoke about healing people being a better alternative than hurting people.

“The only way to heal a wound is to open it up and cleanse it and that stings, that hurts, but you have to expose it to air and I’m afraid that the general tenor of conversation in this country is to cover it up, bury it, put it to the outskirts and don’t deal with it.”

It’s a difficult topic to get a real handle on, but Stewart offered his own personal insights without claiming that he’s unequivocally right or wrong, which is usually the best way to tackle such hot-button issues head-on.