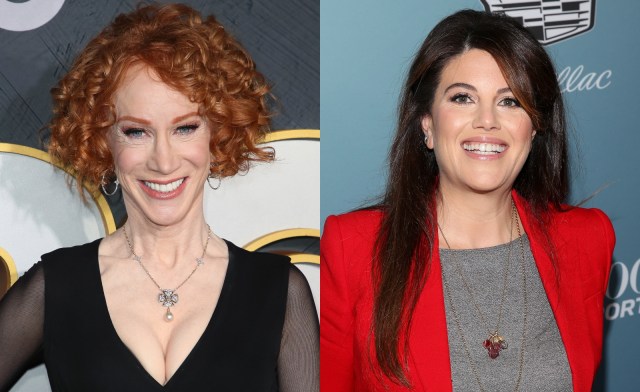 From Furby and Beanie Babie toy crazes to the introduction of the McDonald’s Supersize menu, there’s plenty good to be remembered from “The Good Decade.” But, perhaps the most jaw-dropping piece of remembrance to come out of the ever-popular ’90s was the affair scandal between former President Bill Clinton and former White House intern Monica Lewinsky — which continues to gain attention even to this day.

Now, years after the scandal took place, notable Trump critic and comedian Kathy Griffin is dishing about a moment she shared with the former Presidential intern during a party at her house. During an appearance on Jimmy Kimmel Live, Griffin revealed that she straightforwardly asked Lewinsky if she voted for Bill’s wife Hillary in the 2016 Presidential election, where the former Secretary of State was running against Republican candidate Donald Trump.

“So I said, ‘look, ‘Mon, is it okay if I ask you this? If you don’t wanna answer, fine, but I’m dying to know. … Were you able to bring yourself to vote for Hillary Clinton in 2016?’ And I said, ‘have you ever been asked?’ She said no. So anyway, she did. She said, ‘I couldn’t let my own issues get in the way… I couldn’t vote for Trump, so yes, of course I voted for Hillary.’”

Considering Griffin’s highly-publicized history with Trump, it makes perfect sense for the 61-year-old comedian to include his name in the conversation with Lewinsky. In the past, Griffin posted a video of herself holding a fake severed, bloody head, which was meant to depict President Trump at the time. The incident eventually pushed Griffin’s career into turmoil, although she has since returned to the public eye.

As for Lewinsky, she was accused of having an affair with President Clinton while he was in office, and while he was married to Hillary. Nevertheless, it’s interesting to note that despite everything, after all these years, Lewinsky decided to vote with her head and not her heart.